At the end of the 19th century, off the rugged coast of Northern Labrador, a remarkable enterprise took place: an extensive network of health outposts, cooperative stores, and local industries was established to service the fisherfolk who settled and worked in these remote villages.

The author of this expansive vision was Dr. Wilfred Grenfell, a British medical doctor, social reformer, author and entrepreneur. Grenfell first travelled along the coast of northern Newfoundland and Labrador in 1892, aboard a medical ship delivering urgently needed health services to isolated fishing settlements. Shocked by the lack of medical care for the settler fishing communities, he expanded the mission to establishing health outposts that were supported by numerous volunteer doctors and nurses. This eventually led to his creation of the International Grenfell Association (IGA) in 1914, which created greater economic stability and accountability for his growing ambitions.

Beyond wanting to care for the physical health of fisherfolk, the Grenfell Mission also sought financial justice for the debt-based economy upon which Newfoundland fisheries were based. Grenfell’s efforts came as fisheries shifted from merchant to industrial capitalism. From the 1890s to 1930s, the IGA sought to bring the cooperative movement flourishing in the UK to the region. This would counter the structure of debt that effectively enslaved local fisherfolk to merchants.

Over nine decades, through ongoing international outreach and fundraising, Grenfell and his successors oversaw the construction and operation of twenty seasonal and year-round hospitals and nursing stations, as well as schools, orphanages, cooperative stores and light industries such as lumber mills, community farms and handicraft manufacturing. This vast social and economic infrastructural network had the town of St. Anthony’s as its key centre of services. The Association eventually handed over all its medical services to provincial control in 1980. 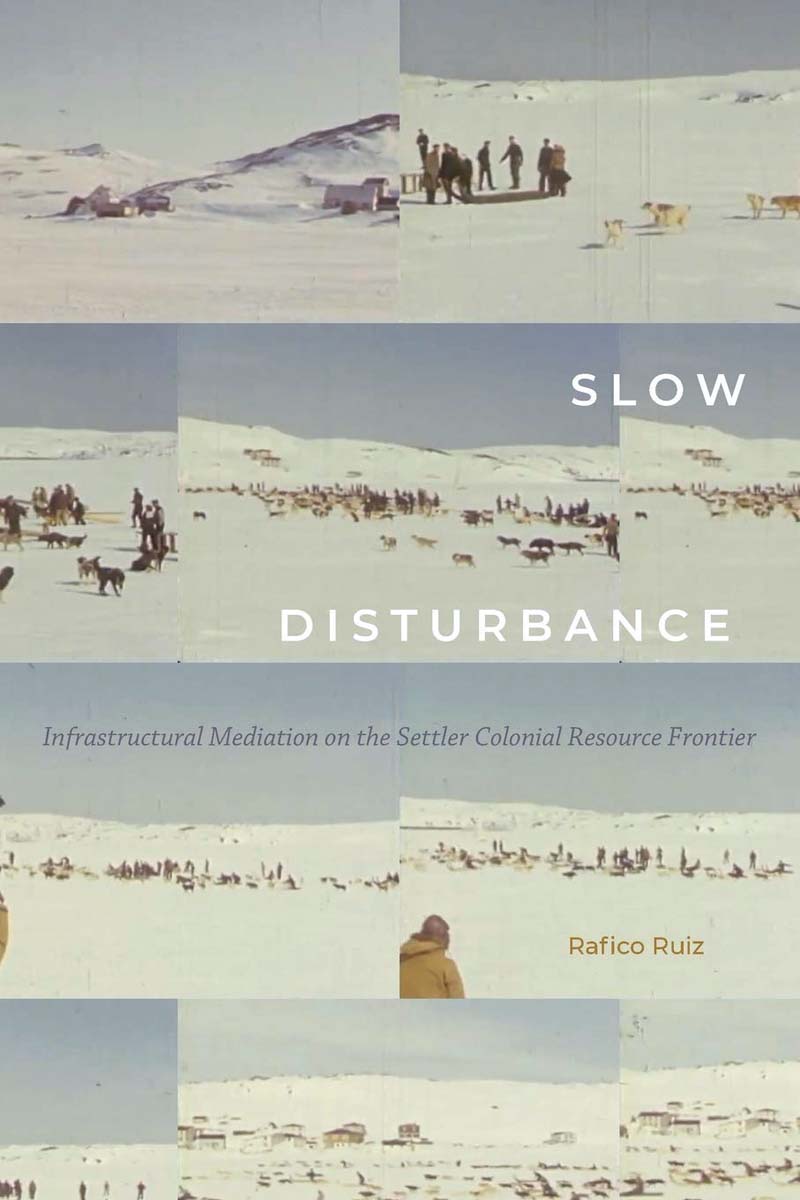 Slow Disturbance documents the Grenfell Mission’s build-out of medical infrastructure, its design of cooperative finance, its mapping of the North Coast of Labrador through experimental aerial surveying techniques, and its use of film for fundraising. Each medium is a notable part of the Mission’s impact. The book explores how resource frontiers get “made and unmade” through what author Rafico Ruiz terms “infrastructural mediation.”  In Ruiz’s analysis, each of the Grenfell Mission’s modes of infrastructure becomes a practice of communication: both to the local settler-fisher, as well as to a larger international audience of scientists, donors, politicians and the military.

Ruiz is a media theorist and Associate Director of Research at the Canadian Centre for Architecture. Although the Grenfell Mission built hospitals, docks, roads, and cooperative stores, Ruiz positions this as more than physical infrastructure. Grenfell and his team used the term “plant” to describe the operational capacity of these infrastructures. Ruiz notes that this term can also be understood as to found, to establish, to settle in
a place, or to form a colony—all strategies to inhabit the Labrador Shore with a Christian-focused, settler-colonial presence.

While the intention of the Grenfell Mission may have been oriented towards charitable works, all infrastructures have ongoing, material durations, which are intertwined with environment and societies, argues Ruiz. To this end, he offers an innovative methodological approach: the book sets up a critical scholarly argument, bracketed at front and back by interviews with people who grew up in (or had direct relationships with) the Mission. These interviews offer a vivid image of daily life in its outposts. The book’s text is complemented by numerous maps, aerial photos, and stills from the films produced by the Mission as part of their outreach and fundraising. These spatial and visual artefacts are evidence of the many forms of mediation that were at work.

The book’s title, Slow Disturbance, refers to anthropologist Anna Tsing’s description of interspecies collaborations which emerge from “contaminated diversity”—as well as human-disturbed ecosystems that have adapted, and in which biodiversity remains comparatively high. For Ruiz, the phenomenon of slow disturbance can be used to understand how the Grenfell Mission’s infrastructure and architecture reshaped the social and economic fabric of settler communities. This disturbance has effectively rewritten our geographic and environmental understandings of this region.

Leveraging the work of media theory, Ruiz extends economic historian Harold Innis’s classic description of Canada’s economy as dependent on extractive “staples” such as fur, lumber, and fish. For Ruiz, this was not merely a process of economic transformation, but one intimately tied to the settler-colonial project, intertwining people, geography and environment in an evolving, durational set of spatio-social relationships.

Infrastructural mediation also took the form of visual and spatial knowledge-gathering and dissemination. Part of Grenfell’s goal was to survey the northernmost coast of Labrador, known as Meta Incognita, or “unknown shore.” The survey “Northern Labrador mapped from the Air” developed at the instigation of Grenfell, employed the novel tool of oblique aerial photography. The maps created would allow for safer summer fishing in previously uncharted water. However, the same method later became a powerful tool for military reconnaissance: local innovations were bound together with larger mediative phenomena.

Ruiz’s study also touches upon the mediation that occurred through the Grenfell Mission’s films, which vividly document sealing activities, infrastructures, and its social projects. These films were made to depict the Mission’s good works and establish the material need of local fisherfolk.

Although Slow Disturbance may best be filed under media studies, the book makes powerful observations on architecture and infrastructure as mediums—something that architectural theorist Keller Easterling has written about extensively, including in her recent book Medium Design (2021). Easterling argues that design in any “medium”—whether a biological, technological or political milieu—is “the design of interdependencies, chemistries, chain reactions.” For Easterling, the nonphysical has physical consequences. Conversely, Slow Disturbance positions the construction of the built environment within a broader creation of political, social and economic relations and structures. For Ruiz, building a physical “plant” inevitably entangles questions of communication, mediation and place.

Indeed, the Grenfell Mission’s impact went far beyond the construction of hospitals. It was a comprehensive act of “world-making” in ways only possible in the 19th and early 20th century. One might understand the Grenfell Mission as part of the legacy of utopian social visions such as Tony Garnier’s Cité Industrielle—but operating at a much larger territorial scale. It was strongly shaped by Christian and settler values of care and charity, and the creation of permanent settlement—yet another of many slow disturbances in that period of history.

Ruiz consistently refers to the Grenfell Mission as an infrastructural “story” or “narrative,” and this characterization is significant to understanding settler-colonial histories during the present moment of reckoning. These stories need to be rewritten and told again to truly understand infrastructure’s impact on geography and people.

The RAIC and Museum Of Vancouver present Architecture and the City: Tall Vancouver Tales