A new edition recasts the classic as a truly global, two-volume mega-tome—the survey effort our field has needed for decades. 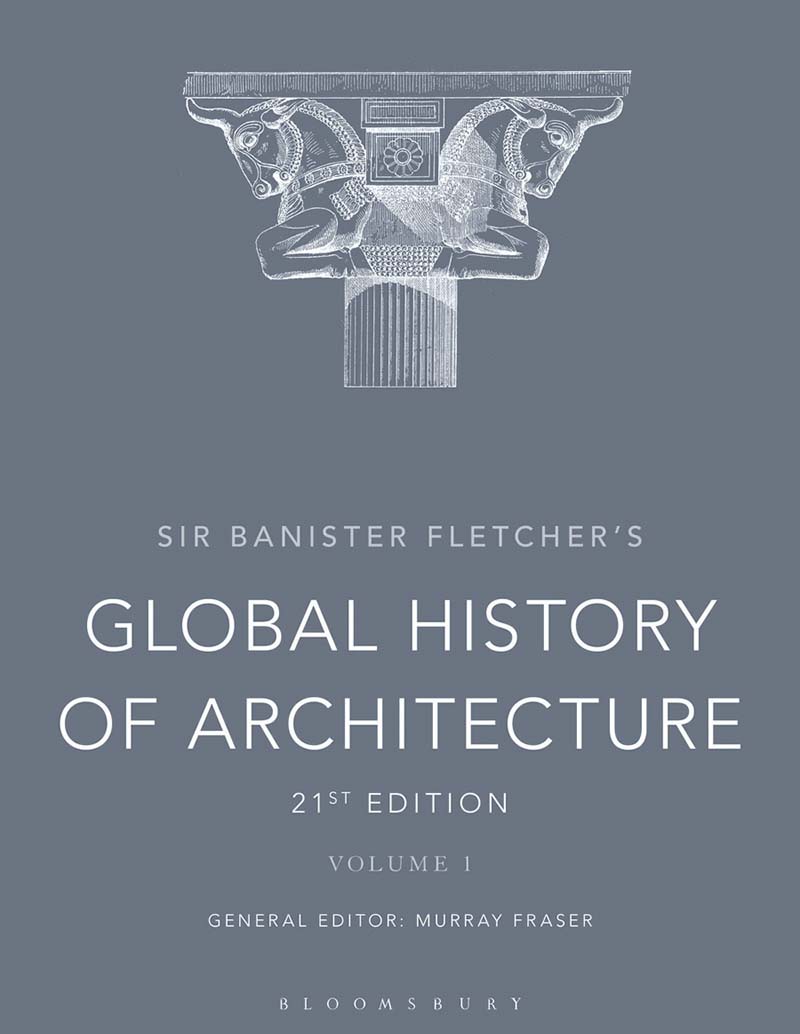 Sir Banister Fletcher’s A History of Architecture on the Comparative Method is something of a legend in our field. Widely owned by many previous generations of architects, the tome of immaculate black-and-white lithographs and texts chronicles some of the most celebrated classical examples of architecture across Europe and beyond. That being said, when it was originally published in 1896, it wasn’t exactly an exhaustive history—but more like an exalted catalogue of key sites for the aristocrat (or would-be classical architect) embarking on their Grand Tour.

After 20 subsequent editions, the book remained relatively parochial in scope. Enter RIBA, Bloomsbury Press, and art historian Murray Fraser, who proposed to bring the book decisively into the 21st century. Sir Banister Fletcher’s Global History of Architecture recasts the classic as a truly global, two-volume mega-tome. Weighing in at 14 lbs, 2 oz, it is an impressive redux and is the survey effort our field has needed for decades.

How to review such a monumental oeuvre? It should be noted that I am not an architectural historian, but rather, a practicing architect curious to learn more about a book I own. I inherited an 18th edition, 1970s volume of Banister Fletcher from a family friend’s grandmother, who was briefly involved with a lauded Canadian architect. I can imagine how she perhaps bought it to try and keep up with him, or how he gifted it to her; either way, there’s a romantic story behind my copy. (Physical-format books are always more than pulp, glue and ink.) Ever since it was given to me, I have kept it as part of a group of books front-and-center near couches, tables, and even stacked on the toilet as light bathroom reading.

A Global History of Architecture is more like a showstopper: a two-volume set with roughly 4,000 pages and 2,200 illustrations, spanning 5,500 years. The first volume deals with global architecture before the 15th century, and the second runs up until the 21st century. Each region is presented by a subject matter expert. The book is organized first by time, and secondly by region. The introduction, by editor Murray Fraser, is a wonderful contextualization for the herculean project. The fact that so many specialists were able to come together, bringing such authority to so many cultures and their architectural history, is an important feat in general academic terms. If ever offered digitally—for instance, as an accessible online portal—Sir Banister Fletcher’s Global History could have the power to help demystify architecture. The act of making architecture more accessible will bring more people into our fold and enhance the profession.

Alas, this hulking monument to book-making is not yet accessible in that sense. At a list price of $750 CAD, the new edition is simply going to be out of reach to most. That is, except academic libraries, offices, and individuals with enough resources to justify the purchase. That being said, nothing of its kind exists—this is not the photo-centric Phaidon Atlas of Architecture, this is serious, rigorous historical writing. In this reviewer’s opinion, it is worth its price.

The primary physical difference from the original edition is that consistent black-and-white, hand-etched lithographs have gone the way of the dodo. Sir Banister Fletcher’s Global History is illustrated with a potpourri of photos, renderings and drawings, from as many different archival and contemporary sources. For architects, the importance of graphic consistency is a touchstone of our professional craft. One must wonder if the publishers were torn between spending their budget on content, versus privileging a team of draftspeople to bring everything into a unified graphic language. If one can speculate about the economics of a project of this scale, something had to give.

There are also stylistic and content-driven differences from the original book. While Sir Banister Fletcher’s History of Architecture offered a primarily formal analysis, Sir Banister Fletcher’s Global History frames works in the broader social, economic, and political contexts of their time and place. The authors bring perspective and a dimension of cultural criticism, offering important insights into how some of the most celebrated achievements in architecture were possible. In some cases—such as an examination of Fascist Italian Architecture from the 1930s—the political context is clearly described in all of its horrors. This is a good thing. As architects, we have to get serious about acknowledging our record of celebrating the authors of impressive buildings without examining their ethics. In effect, the writers bring to light what we as architects know about the rough underbelly of our field, but find so hard to convey to our clients and the general public: architecture plays a powerful role in creating cultural symbols, our cities, and our civilization.

For Canadian architects, it’s notable that  Sir Banister Fletcher’s Global History includes Canada as an independent entity from the United States. The authors of chapter 102, “Canada and the United States since 1912,” are architectural historians Rhodri Windsor Liscombe, based in Vancouver, and Michelangelo Sabatini, a Canadian ex-pat now based at IIT in Chicago. The Canadian material draws heavily from a recent book, titled Canada, that Liscombe and Sabatini co-authored for the University of Chicago’s Modern Architectures in History series. This chapter brings dignity to Canada as a unique creative center unto itself, although perhaps at some cost to the breadth of work included on the United States during the same period. Indeed, bringing Canada into its own as a creative culture was an important victory to acknowledge. In general though, the Canada–United States section seems to be on the short side

As a contemporary Canadian architect, I have some quibbles about the material in this section. For instance, the presentation gives virtually equal weighting to Arthur Erickson and Frank Lloyd Wright, even though Wright’s global impact was far more significant. The inclusion of Philip Johnson without the contextualization of his biography is a damaging oversight. Certain buildings—such as Will Alsop’s OCAD building in Toronto—aren’t mentioned, and should be.

That being said, nothing in history is perfect, and the two editors for the Canada-USA section have done an incredible job presenting Canada as a place unto itself. It will be up to the architects of our time to create enough of a difference in practice to significantly expand on the Canadian content of a book such as this one. This means being bolder and more supportive of radical change and players within our community. It also means celebrating ourselves and our work more unabashedly.

Perhaps there are other chapters and eras that suffer in similar ways. This may actually be a good thing, as it leaves much to be developed and described in future editions of  Sir Banister Fletcher’s Global History.

If this book was presented to me in a design crit, here’s what I would suggest. Future editions might be broken into smaller regional or cultural volumes that could be expanded upon, based on available resources and interest. This could also open up the possibility for periodically updating regional volumes, rather than the entire book. Rather than two rather awkward tomes, the binding could be a larger book sleeve, with individual volumes being bound differently, and in higher quality materials. As each regional volume is updated, the graphic design could be scrutinized,  and consistent line drawings introduced, in the spirit of the original Sir Banister Fletcher’s History.

While on a certain level, Sir Banister Fletcher’s Global History lacks the kind of physical preciousness that the previous editions had, the foundations are laid for this to be an important project within the discipline of architecture. And perhaps like any significant design project, this one will never be finished. It is important that this effort stays alive as a growing archive. Architecture firms, enthusiasts, and institutions from around the world would need to get on the bandwagon to support it financially. A digital version accessible online should be pursued. More people and more resources should be mobilized to keep drawing, keep writing, and keep building on the realities—good and bad—of the history this profession is creating.

Alex Josephson is a principal of Toronto-based firm PARTISANS, and an adjunct professor at the University of Toronto’s Daniels Faculty of Architecture, Landscape, and Design.

It is Bright, It is Lit: Qaumajuq, Winnipeg, Manitoba