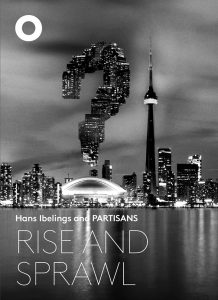 By Hans Ibelings and PARTISANS. The Architectural Observer, 2016.

“Sprawl” has multiple definitions, but my personal favourite was raised by Ellen Dunham-Jones, Director of Urban Design at Georgia Tech School of Architecture, in Gary Hustwit’s 2011 documentary, Urbanized. “Defining sprawl is a little bit like defining pornography,” she explains. “You know it when you see it.” But at a time when cities around the world are experiencing steady growth and, increasingly, urban residence is heralded as a better, more sustainable way to live, what if we’ve lost sight of what it is we’re actually trying to avoid? What if we’ve pushed “sprawl” in an entirely new direction? What if we’ve forgotten how to critically look at what is springing up all around us?

Hans Ibelings and PARTISANS broach this difficult topic in their book Rise and Sprawl: The Condominiumization of Toronto. Systematically reviewing planning, design, development, and marketing processes in a city that is consistently ranked as one of the most livable and competitive in the world, this dynamic co-authorship bravely tackles the question: “How do you fix something that does not yet appear to be broken?” Critical but not accusatory, methodical but not without inspiration, Rise and Sprawl divides and conquers this complicated topic in three tidy sections.

The introduction, an essay entitled “Tower by Tower” by Ibelings, balances context with criticism, carefully reviewing how Toronto arrived at its current skyline. Examining everything from zoning regulations, to Jane Jacobs, to the unifying principles of a city and its architecture, he applies a conversational tone to the rapid growth of downtown Toronto.

In Section 2, Catalogue, PARTISANS takes a straightforward look at condominium development over the past decade. True to its name, this section chronicles everything from demographics and architect/developer profiles, to standardized floorplans and marketing campaigns. While not exhaustive, this section provides a more than adequate range of materials to spark such critical questions as: Is condominium marketing inspired by architecture, or have these roles somehow reversed? Why do we have a strange attachment to unusable balcony space? Why do all developers seem to talk about their commitment to great design, all architects their commitment to great clients, and all renderings still end up looking exactly the same? With little-to-no narrative to accompany each subsection, this catalogue provides an invaluable comparative analysis that strikes at the heart of the problem.

By Section 3, Manifesto, the point has become painfully obvious. The research is clear, yet no fingers are pointed. If Toronto con-dominium design lacks inspiration, it’s a failure of the whole, and it can’t be pinned down to one single part. If there is a flaw in this book, it lies only in the selection of the word “Manifesto” for this final section, when “Invitation” would be a closer description of what is suggested here.

While Rise and Sprawl could easily be dismissed as by and for the Toronto design community, to do so would be a mistake. This co-authored criticism is about the power of cities, the loss of our ability to identify sprawl and, most importantly, the necessity of working together to find a way forward.

Samantha Armitage is a writer and marketing professional based in Toronto.