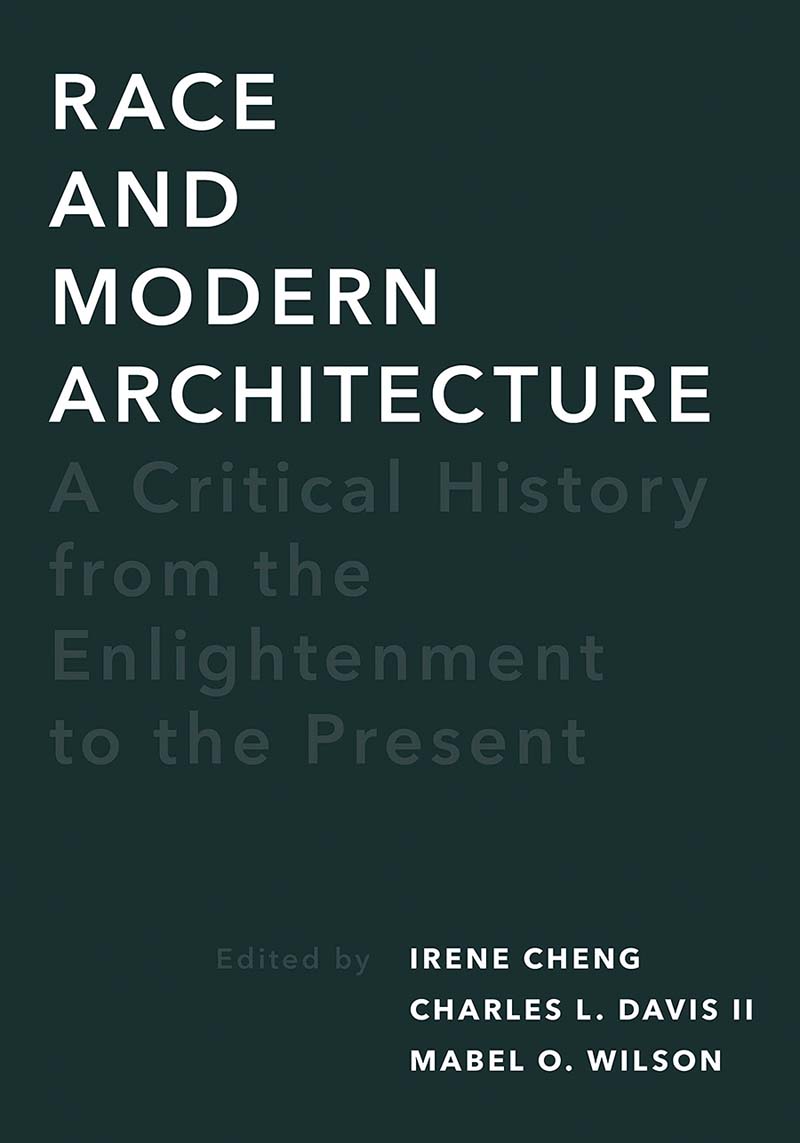 Race and Modern Architecture: A Critical History from the Enlightenment to the Present
University of Pittsburgh Press, 2020.

In recent months, the horrific death of George Floyd at the hands of Minneapolis police and the Black Lives Matter protests that followed have prompted widespread reflection on the roles of race and racism in architecture. These events have spurred institutional statements, calls for action, and the sharing of syllabi and reading lists on architecture and race. Race and Modern Architecture: A Critical History from the Enlightenment to the Present is a timely addition to these efforts.

The result of a four-year interdisciplinary research project, this edited collection aims to “revise one of the core narratives of modern architecture—its association with universal emancipation and progress—by uncovering modernism’s long entanglement with racial thought.” In doing so, it highlights both the pervasiveness of race in modern architecture and its simultaneous omission from the so-called canon of architectural history and pedagogy.

The editors of Race and Modern Architecture recognize a need to not only append “other” architectures and critical histories to the canon. Rather, they propose to examine how race is constitutive of modern architecture, suggesting that “race can be read as much within the canon as outside of it.” The opening chapters thus recontextualize early American civic architecture through its disavowal of slavery, as it sought to represent a liberty and democracy from which Black people were excluded. Here, the figure of Thomas Jefferson looms large, and the authors shine a light on his and his contemporaries’ personal connections to slaveholding, as well as pointing to overarching links between slavery and architecture.

While the book’s opening chapters focus on the USA, other contributions traverse the Atlantic in presenting case studies from Europe, Africa, and Asia. This substantial volume also covers a long timeframe, spanning from the 18th century to the present, although the majority of its 18 chapters address the 20th century. To facilitate connections between seemingly disparate texts, the chapters are deftly arranged into six themes: enlightenment, organicism, nationalism, representation, colonialism, and urbanism. The section on colonialism, for instance, links Jiat-Hwee Chang’s examination of architectural identity-formation in postcolonial Malaysia and Singapore to Mark Crinson’s study of colonial “villagization” policies in mid-20th-century Kenya. Both of these cases contend with the fallout of British colonialism and its attendant racial thinking.

Concepts of race are socially and culturally constructed, operating differently in different geographies and changing over time to serve different purposes. The editors of Race and Modern Architecture note how this presents a distinct challenge in writing race back into architectural history. Examining such changes and their relationship to architecture can constitute a historical project in itself. Addison Godel, for instance, investigates how shifting 18th-century relations between Europe and China were reflected in increasingly racialized and exoticized European perceptions of the Chinese garden. In a different vein, Luis E. Carranza examines how, in post-revolutionary Mexico, notions of race operated in two competing approaches to a national architecture: one hybridized, the other pre-Columbian and “pure.” Other chapters make clear that race—in general and in how it relates to architecture—is not a neutral concept, but must be defined relative to its specific history and geography.

Critical whiteness studies is a field that is making an increasing impact on architectural history. This approach acknowledges whiteness as a racial concept and examines its effects, such as social privilege and systemic racism. The editors of Race and Modern Architecture write that at minimum, addressing race in architecture would require “acknowledging the white cultural nationalism that lies at the heart of the Enlightenment project and its attendant processes of canon formation.”

Contributions by Charles L. Davis II and Dianne Harris engage with this line of thought through studies on the architecture of white settler colonialism in the Midwest and the photographic representation of postwar single-family housing, respectively. Harris’s chapter strongly resonates with current discussions on anti-Black violence. Drawing on her excellent earlier book, Little White Houses: How the Postwar Home Constructed Race in America, she makes connections between staged photographs of white families in houses at the U.S. Gypsum Research Village and a funeral photograph of the mutilated body of Emmett Till, an African-American boy who was lynched. Harris’s analysis underscores that this portrayal of the “lived nightmare” of many Black people and people of colour represents the underside of the American dream displayed in the U.S. Gypsum photographs.

Although it doesn’t directly address the Canadian context, Race and Modern Architecture touches on American and European cases with which many Canadian readers will be familiar, in addition to relevant topics beyond these borders. The book also provides models of critical approaches to race in architectural history. In the face of Canadian exceptionalism regarding racism and colonialism, it becomes imperative to examine how profoundly racial thought has influenced architecture on these lands.

From the inherent exclusions of the search for a national “style,” to the marginalized built environments of racialized communities, to the racist philosophies of prominent architectural figures, there is much to exhume in Canadian architecture when it comes to race. The latter, for example, is examined by Annmarie Adams in a forthcoming book chapter on Ramsay Traquair, whose racist and sexist views correlated with his romanticization of the architecture of New France. In his work on immigrant detention buildings of the early twentieth century, David Monteyne examines the role of anti-Asian racism in Canada’s formation. Architectural histories might also address slavery in Canada, settler colonialism, the colonization of Indigenous Peoples, and the racial politics of multiculturalism.

Race and Modern Architecture is a decidedly academic work. Considering its genre—and, especially, its subject matter—it is not easy reading. However, it represents a significant contribution that will aid scholars, educators, practitioners and students in better understanding the role of race in Western architecture and provide a much-needed corrective to the silence surrounding race in architectural education. The chapters can be used to enhance existing teaching and inform scholarship on topics such as the Enlightenment, Gothic architecture, postwar housing, and urban renewal. For practitioners, this carefully edited history may fill in gaps in historical knowledge and illuminate racial injustices playing out in contemporary cities. Anyone interested in beginning these difficult conversations will find this book invaluable.

Magdalena Milosz is a PhD candidate in the Peter Guo-hua Fu School of Architecture at McGill University.