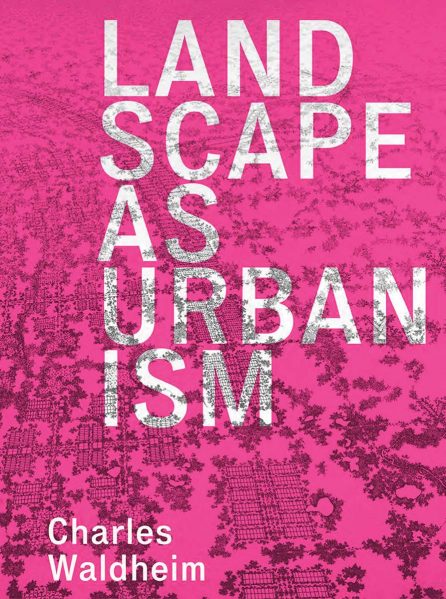 “In a period of a cult to the individual and the genius, with all due respect to genius, it is not to them that we owe our best cities.” Josep Lluís Sert, 1956.

“The architectural revolution, like all revolutions, begins with enthusiasm and ends in some sort  of dictatorship.” Alvar Aalto, on the International Style, RIBA Talk, 1957.

The 20th century modernist landscape architect Thomas Church once bemoaned his profession’s status in relation to architecture as “parsley around the roast.” Fortunately, in the almost 40 years since Church’s death, much has changed. Concerns regarding resilience  in light of climate change, the remediation  of brownfield sites and failed industrial cities, the revitalization of waterfronts, and the overall concerns of hydrology, ecology and sustainability have elevated landscape architecture  to a new and much more significant role.

Charles Waldheim, a distinguished teacher, writer and theorist at Harvard, has been  an advocate and champion of the welcome  rebirth of landscape architecture under the moniker of “Landscape Urbanism.” Waldheim’s very thorough and highly researched book Landscape as Urbanism: A General Theory examines the historical, theoretical and cultural  conditions that have resulted in an array of impressive projects: including New York’s High Line, Brooklyn Bridge Park, and closer to home, the Toronto Waterfront and the proposed Lower Don Lands project. Waldheim sees all these as exemplars of Landscape Urbanism.

Waldheim’s broader ambition is to position the landscape architect as the urbanist of this age. He states: “Landscape Urbanism presents an implicit critique of architecture and urban design’s inability to offer coherent and convincing accounts of contemporary urban conditions,” and claims that “landscape supplants architecture’s historic role as the basic building block of urban form.”

Fighting words indeed! Waldheim’s prime argument for this transformation is the broad ecological foundation of the landscape discipline (the concluding chapter of the book  is entitled “From Landscape to Ecology”.) What are we to make, then, of his seeming  endorsement of Atlanta as a positive example of the North American urban condition?  He quotes Rem Koolhaas’s description: “Atlanta does not have the classical symptoms  of the city: it is not dense; it is a sparse, thin carpet of habitation… Atlanta is not a city;  it is a landscape.” Atlanta is also an unmitigated ecological and public health disaster.  In comparison to Barcelona (a city of approximately the same population and level of wealth per person), Atlanta takes up eleven times  as much land, and produces six times the transport-related carbon emissions per person.1 Atlanta’s automobile commute distances are the longest in the United States.

Waldheim has a particularly strong antipathy toward New Urbanism. However, he takes on the easy (and deserving) target of its nostalgic sentiment and historicist forms without discussing New Urbanism’s well-crafted charter, or the more regional New Urbanism of Peter Calthorpe on the West Coast. Eerily, Waldheim’s complete dismissal of the traditional urban form of streets and squares brings to mind Le Corbusier’s wholesale condemnation of the street, at La Sarrez in 1928—where as one commentator stated, Corb’s open hand became a closed fist.

The problem is hubris—the suggestion that one “ism” or formula is universally appropriate. The verbal and written exchanges between proponents of New Urbanism and Landscape Urbanism often border on juvenile. To dispel this false dichotomy, one only has  to look to Central Park in New York, where Olmstead’s large landscape sits within the traditional city: a hybrid where each is made better by the other. Traditional urbanists have worked jointly with landscape urbanists to produce outstanding work. The Lower Don Lands and the Toronto Waterfront are examples of such collaboration.

Rather than a territorial battle, the emergence of a more significant role for landscape architects should be seen as a refreshing  opportunity for a team-focused, collaborative approach to urbanism.

Too often, architects have treated landscape architecture as exterior decoration, denying it the significant role it deserves. Waldheim’s support of landscape architecture is both timely and welcome. That doesn’t mean that Landscape  Urbanism should—any more than New Urbanism—become a formula for universal application.

1 The New Climate Economy. The Global Commission on the Economy and Climate: The Victoria Transport Policy Institute and LSE Cities, 2015.