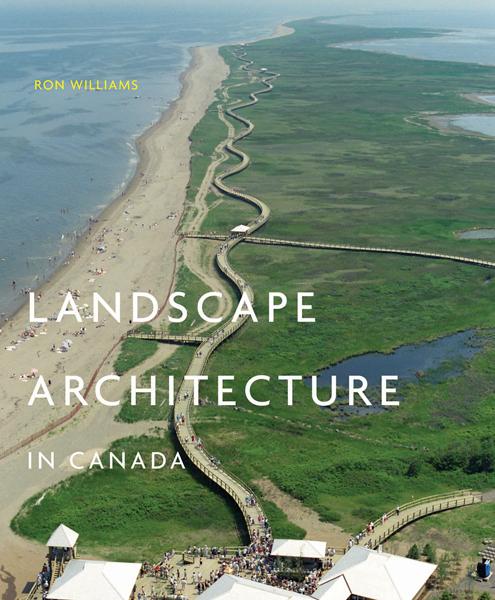 This unique compendium is the outcome of 15 years of patient research undertaken by Montreal landscape architect Ron Williams. The author takes us on an amazing journey from pre-colonial times to the present, through Canada’s rural and urban landscapes from coast to coast to coast.

After a brief introduction to geomorphological considerations, the reader is invited to an informative exploration of the ways of the First Nations, before the arrival of the Europeans. There follows a wide survey of early settlements and subsequent waves of immigration, gradually spreading across the land. Looking to the 19th and early 20th centuries, Williams documents the birth of a new profession. His wide-ranging exploration surveys the Halifax Public Gardens to the public and private gardens of Victoria, British Columbia, and everything in between.

The author explores the history of ideas in landscape—how, for example, cemeteries led to large urban parks and how the City Beautiful movement inspired the designers of legislative and university grounds. Throughout, the emphasis is placed on the outstanding individuals—professionals and decision-makers—who engaged in the creation and protection of the landscapes and city landmarks we still cherish today.

The second half of Williams’ tome deals with the post-WWI era up until today. We are introduced to key people who had a tremendous impact on Canadian cities and landscape, including amateur gardeners such as Elsie Reford and trained professionals such as Frederick Todd and Humphrey Carver. A feminist at heart, Williams also pays tribute to women who were pioneers in the field. Thus, we are reacquainted with Helen M. Kippax, Frances Steinhoff, and Frances McLeod—who, after studying at the Lowthorpe School of Landscape Architecture, one of three American institutions offering women specialized training—returned to Toronto where they each contributed to the emergence of the profession.

After acknowledging contemporaries and younger colleagues such as Claude Cormier, Williams chooses to end his book on a foreboding note. The last chapter, written before the most recent oil crisis, raises larger environmental issues. In his gentlemanly manner, Williams does not hesitate in tackling Alberta’s oil sands industry, which he compares to Nova Scotia’s now defunct coal industry. He asks: “Is the Athabasca region destined to recapitulate the harsh destiny of Cape Breton, where industry demanded a high human and ecological cost that we are still paying, hundreds of years after the first exploitation?”

Much more could be said about this well-written and abundantly illustrated publication, which at times reads almost like a novel. Thanks, Mr. Williams!

Odile Hénault is an architecture critic, curator and professional advisor.