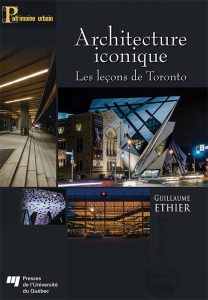 In this book, the term “iconic architecture” (“architecture iconique”) denotes the specific mode of contemporary architectural production that relies on the creation of spectacular buildings for cultural institutions to stimulate economic development and urban transformation. Typically adopting a strategy of rupture from their surrounding urban context, these buildings are analyzed as participating in larger attempts to transform a city’s identity in the eyes of local and global publics.

Taking Toronto as a revealing case, Guillaume Ethier focuses on four major cultural institutions that commissioned signature buildings during the first decade of the 21st century, namely: the Ontario College of Art and Design University; the Royal Ontario Museum; the Art Gallery of Ontario; and the Four Seasons Centre for the Performing Arts.

Written by a sociologist who studies urban form, the book is insightful and free of design-speak jargon. Substantial attention is given to considerations of terminology, sociocultural context and method, laying the groundwork for the ensuing case studies. A discussion of Toronto’s cultural Renaissance and the city’s various identities provides further context. Since the turn of the 20th century, Toronto seems increasingly inclined to define itself as a place in transformation, which owes in part to its new iconic interventions.

A valuable study in contemporary architectural developments in Toronto, this book sheds light on issues that are relevant to other Canadian cities, as well as to urban centres globally.

Aliki Economides is Scholar-in-Residence at McGill University’s Centre for Interdisciplinary Research on Montréal (CIRM) and teaches at the Université de Montréal’s École d’Architecture.

Book Review: Where Are the Women Architects?