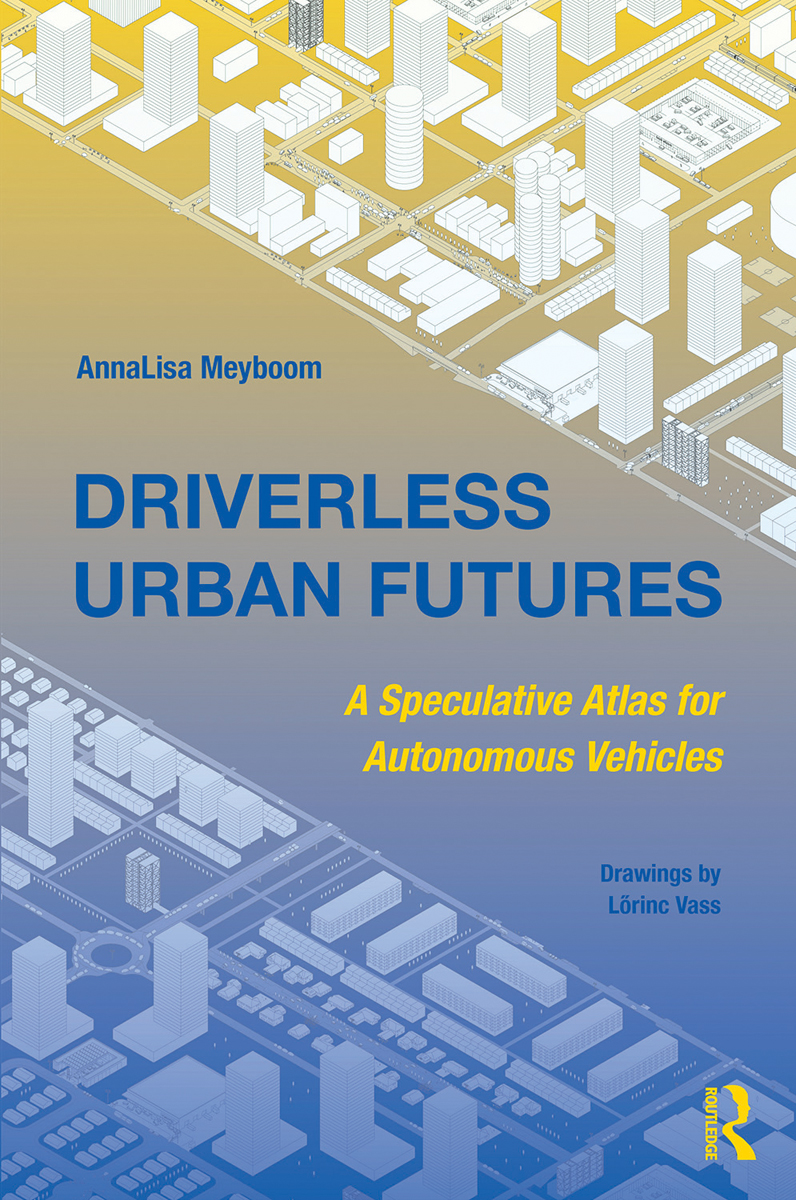 Book by AnnaLisa Meyboom with drawings by Lörinc Vass (Routledge, 2018)

There was a time when “manual driving” denoted the heady thrill of sliding into fifth gear in a standard-transmission sports car. Not only is that definition growing anachronistic, our common concept of the automobile itself is on the way out—or soon will be. The driverless car is coming soon to a roadway near you, and it will eventually transform the very act of being at the wheel to passive from active. As AnnaLisa Meyboom relays in Driverless Urban Futures: A Speculative Atlas for Autonomous Vehicles, this upcoming transformation will change the nature of driving and the design of cars, to be sure, but also the format of our cities. Meyboom, an associate professor at the University of British Columbia’s School of Architecture and Landscape Architecture, has issued one of the most comprehensive texts of this impending development, raising questions and issues that few designers, politicians, planners and voters have even begun to think about.

The book is richly variegated with essays and analyses, technical summaries, historic context and even an insightful essay by Lörinc Vass on the act of drawing. (Vass’s line drawings of the future autonomous vehicle (AV) and street reallocations are an essential complement to Meyboom’s texts.)

Mayboom unpacks the essence of the AV itself—its basic engineering and ergonomics; its industrial design and the temporary need for it to be skeumatic—that is, designed to look like what we expect a car to look like, for our own psychological reassurance and consumer acceptance.

Meyboom helpfully summarizes the general workings of the AV systems and individual vehicles. In case you’re wondering, intersections will be managed not by traffic lights but by computer sensors that engage with each approaching AV. When pedestrians enter the roadway or make movements to do so, the AV automatically stops, often well before the line and usually more cautiously than it needs to. The vehicle can be programmed to drive aggressively or more cautiously—behaviour that is referred to, in a slightly creepy anthropomorphic term, as its “disposition.” Then she offers a series of case studies that compare hypothetical scenarios, comparing for-now imaginary users of conventional automobiles or mass transit with the driverless car, as well as the plethora of potential pedestrian-AV and AV-to-AV interactions.

Implicit in every scenario is just how much of our current thinking on urban design and transportation will be obsolete once the AV becomes widespread. Beyond the advantage of allowing drivers to work or read while commuting, AVs have the additional benefits of taxis and car-sharing services in that they can be summoned to one’s departure point and left at one’s destination. The inevitable future impacts on parking, infrastructure, traffic circulation patterns, mass transit systems, highway design, urban and exurban growth, consumer behaviour and pedestrian reclamation of the roadways could be massive.

Accordingly, Meyboom calls for architects to play a major role in this urban reformatting, given the multifaceted nature of this complex issue. “The disciplinary skills of the architect—the ability to imagine the future in multiple forms and the potential of a design approach which incorporates a broad range of cultural and social concerns—are a powerful tool for designing the future,” she writes. The driverless car, though still a rarity, is about to proliferate across the western world, but it’s far from certain that the world is ready.

Adele Weder is an architectural curator and critic based in British Columbia.