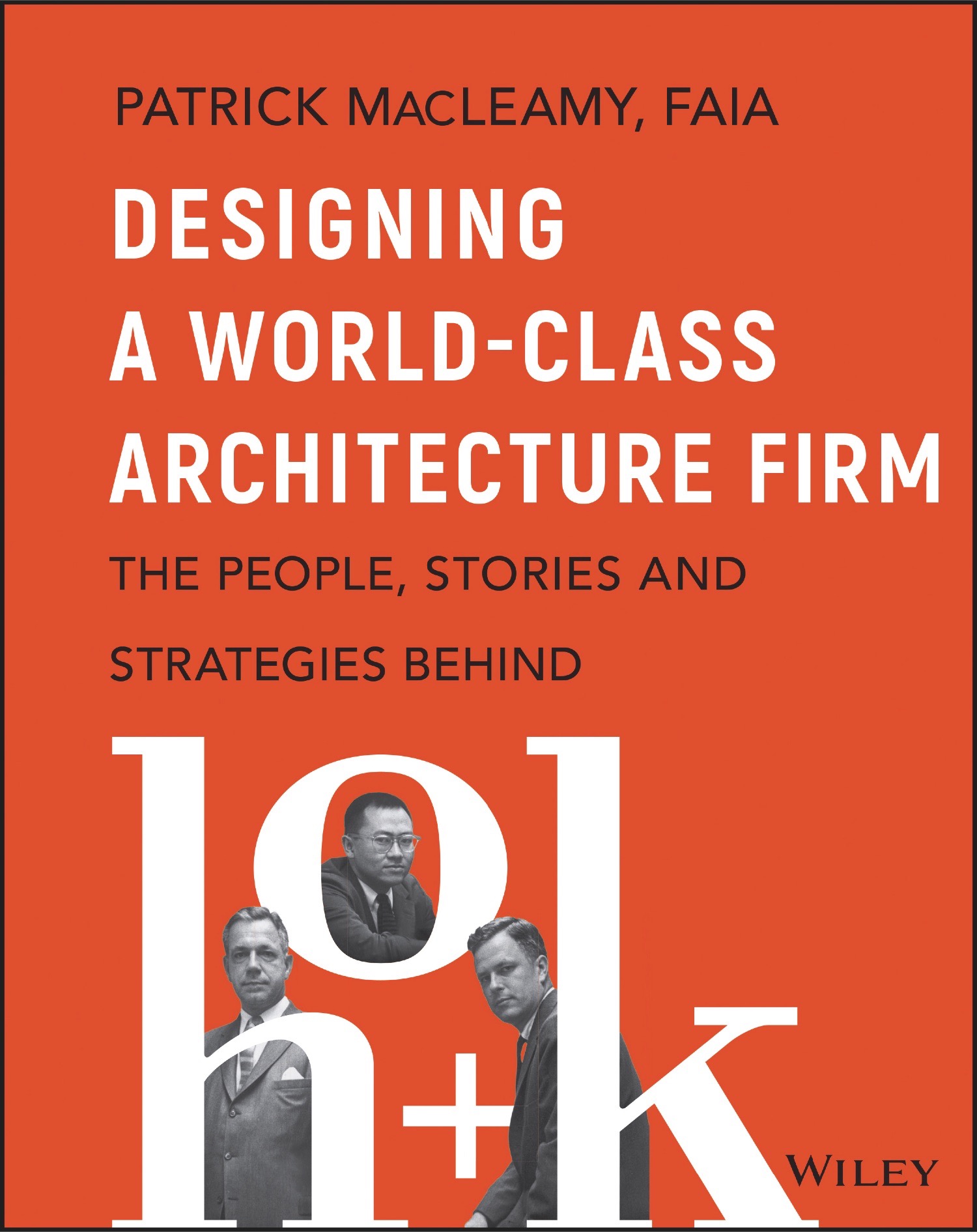 From the title, I initially thought this book was about design. But make no mistake: it is all about marketing, winning projects, corporate strategies, organization, operation, business, growth and the profitability of HOK, which has office in numerous major cities and projects in over 50 countries.  This makes sense when you look at the firm’s leadership. Architect Gyo Obata co-founded and led HOK for 10 years, but all of its other CEOs came from the business and management side of things—up until the present, when a designer, William Hellmuth, is once again at the helm.

William is the nephew of another of the firm’s co-founders, George Hellmuth. The senior Hellmuth grew up watching his own father’s architectural firm go through cycles of boom and bust. They hired staff, trained them for each project, but had to let them go in the absence of the next project in line.  George was determined to change this vicious cycle, through creating a new kind of architectural practice.

This book is about the people, stories, and strategies behind that firm, HOK. The book is organized chronologically in four main periods, as the firm evolved under the leadership of George Hellmuth, Gyo Obata, Jerome Sincoff and Patrick MacLeamy (the latter is the book’s author).

This focus on business sidesteps HOK’s creation of some extraordinary works of architecture. However, the firm’s genius was evident from the beginning, particularly in Obata’s designs for masterpieces such as Lambert Airport of 1956 (concept design by Minoru Yamasaki, completion by Obata), the poetic Priory Chapel of 1962, and the elegant James S. McDonnell Planetarium of 1963.

Innovation in management, marketing and design has been a hallmark of everything that HOK did from the start. Hellmuth set out with a strong marketing plan, but he knew that the firm must have excellent design and production leaders. He invited Obata to lead on design, and George Kassabaum to lead on production; the trio founded the firm as Hellmuth, Obata + Kassabaum in George’s hometown of St. Louis, Missouri. In the book’s telling, Hellmuth brought in work, Obata designed the projects, and Kassabaum saw them through to completion.

Initially, George Hellmuth used his natural charisma to gain clients. Later, there was a shift from “Charm Marketing” to “Knowledge Marketing” as clients interviewed the project team. As the firm built up its portfolio, every project became a marketing ad—MacLeamy refers to them as an unbroken chain of projects, where each project attracted new clients who wanted a building of similar quality and aesthetic appeal.

From his previous partnership with Minoru Yamasaki, Hellmuth learned that a designer’s ego can often get in the way of good business. All three of HOK’s founders were sons of German and Japanese immigrants, and they were determined to work together as a team. “They believed in seeking out the very best ideas, no matter who they come from,” writes MacLeamy. “They wanted people to check their ego at the door and work together as a team, like a family of talented people.”

When HOK began, it had the great advantage of having a healthy backlog of work, from its split with a predecessor firm headed by Yamasaki.  However, Hellmuth also knew that it was relatively easy to get jobs in a good economy, and he wanted to create a recession-proof firm. HOK’s strategy to achieve this included:

Later, under the leadership of Jerry Sincoff, HOK adopted new strategies to keep the firm growing, including seeking work internationally and by acquiring other firms. Succession planning is more common nowadays, but back in 1972, HOK was visionary in implementing a plan to name a successor for each retiring founder—starting with King Graf for Hellmuth and Bill Valentine for Obata. George Kassabaum died in 1982, but his second-in-command, Jerry Sincoff, proved to have the skills and experience to step into his role. The corporate structure was formalized under Obata, with an Office of the Chairman providing umbrella leadership, and individual leaders in each office and market sector.  This structure became known as the HOK Matrix: the specialized offices delivered better projects, contributing to the firm’s reputation and ultimately generating more project opportunities.

Growing pains became apparent as the firm expanded with offices in San Francisco, Washington DC, Houston, Kansas City, New York and later in London, Hong Kong, and other cities. HOK’s leaders wanted to grow, but also to maintain the family-style culture of the firm that was so important to the founders. They set out to address these challenges, and particularly to examine the uneven profitability of the offices. Jerry Sincoff became CEO in 1993, and formed an Executive Committee focused on providing leadership for a changing world. A Board of Directors was composed of leaders from various offices, disciplines, and specialized market sectors. Managing 29 offices eventually proved unwieldy, and HOK consolidated them into 10 major offices—which they called the Big Ten—who could form their own branches. The firm’s motto became “Get Bigger or Get Better.”

The offices became specialized in markets such as aviation, sports, and hospitals; sometimes they ended up competing for the same projects. Sincoff’s goals were “Growth Above All,” “Focus on Client,” and “Firm-Wide Market Practices.” Seeing the offices drifting apart, he set in motion a series of retreat sessions to steer the firm back to a more collaborative culture. This was not easy to achieve until some years later, when changes in the industry provided new digital-era tools that helped ease communications and team work between offices.

HOK has always been forthcoming in adopting computers, and even had two homemade drafting programs long before AutoCAD. The firm was also an early subscriber to sustainability imperatives and green design. But larger changes came in the MacLeamy era, with new capabilities in Building Information Modeling (BIM), internet and cloud base communication. MacLeamy and other HOK leaders embraced the new technologies and moved to create unprecedented capabilities, grounded in creating a large data base of all the firm’s previous projects, accessible to all HOK employees, and advanced Intranet and email servers. There will always be gifted designers, but the book reaffirms how the world has moved from instinct-based design to knowledge-based design.

The book offers a good deal of information for readers interested in office operations, cash flow, finances, acquiring other firms and, to some degree, accounts of winning major projects locally and abroad. Every chapter ends with bullet points recapping the lessons learned. While this book is more useful to larger firms, the wisdom of running a smart architectural firm and the underlying principles at work at HOK may be transferable to smaller firms as well. It is especially welcome since few books exist about the business of architecture. In a way, it’s written like a memoir—not of a person, but of a business. The book naturally reveals no trade secrets, but is candid and filled with stories of high-level corporate decisions and strategies that were instrumental in making HOK one of the most successful architectural firms in the world.

Loghman Azar is an architect and urbanist based in Toronto. He graduated from Harvard University and is recognized for expertise in sustainable design and high-performance buildings. [email protected]