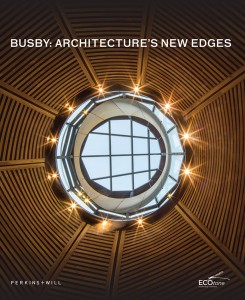 The text oscillates between two modes of writing: one philosophical and autobiographical, the other factual and institutional. In chapter introductions, Busby provides a lessons-learned account of his practice and experience in the field. Other texts, accompanied by photographs and diagrams, describe an impressive array of projects. Both modes are organized around catch phrases that embody a generation of design ideals—corporate responsibility, whole systems thinking, regenerative design, and so on.

While rich in photographs, diagrams and texts, the book is slim on plans and sections, making it difficult to evaluate Busby’s projects on their own merits. This doesn’t prevent the book from being read as testament to an era of architectural innovation. The anthology’s description of how subterranean heat pumps, gasifiers and bioswales The deployment of subterranean heat pumps, gasifiers and bio-swales were deployed in various projects provides evidence that what were once seemingly outlandish and utopian ideas are now commonplace tools that help define current architectural aspirations.

Mark Woytiuk is a Vancouver-based writer and architectural researcher.

Book Review: A View from the Porch