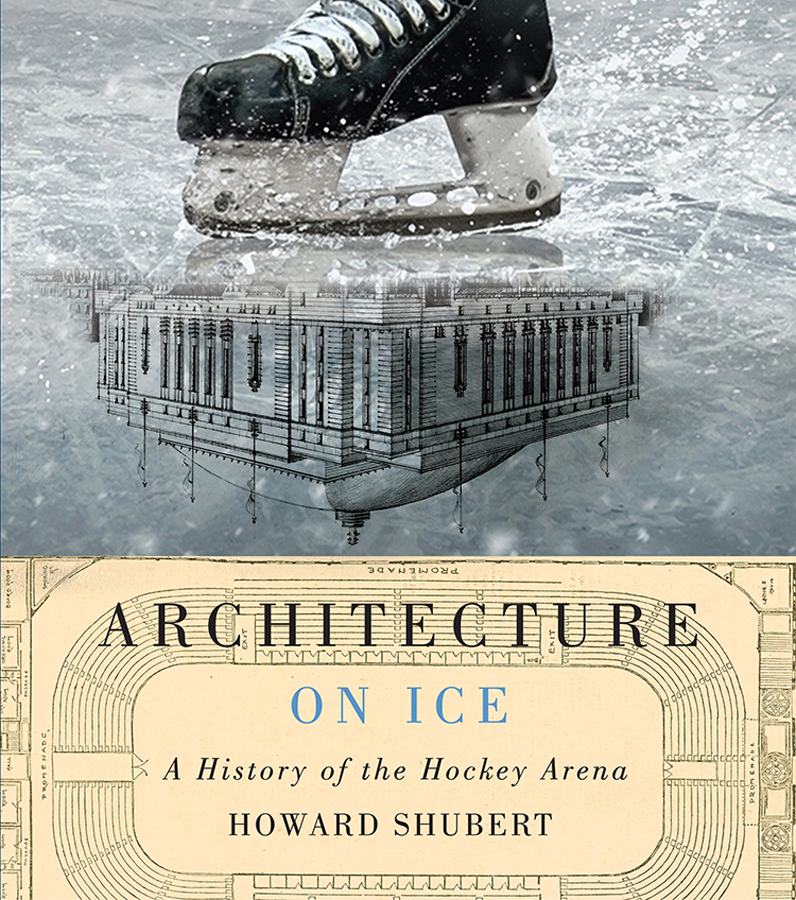 Architecture on Ice: A History of the Hockey Arena

Exceptionally researched and peppered with intriguing photographs and illustrations, Architecture on Ice examines the development of buildings for skating and hockey. Having previously published work on the Montreal Forum, Shubert, former curator of prints and drawings at the Canadian Centre for Architecture, draws on a long-standing fascination with the subject to present a rich history of what may be “North America’s most overlooked cultural buildings.”

For Canadian architecture and sport enthusiasts, Architecture on Ice is a fascinating read, as it delves into the complex dialogue between hockey and architectural histories. While the narrative unfolds around the exploration of specific buildings, Shubert is conscious to frame the significance of these projects within the development of the sport. Given our country’s role in the emergence and popularization of hockey, many of the precedents explored in the book are Canadian.

The book opens with an exploration of 19thcentury buildings for skating and hockey before moving into the interwar development of the sport. This period sees the creation of a number of long-standing shrines to the game. The book provides intriguing background on the development of both the Montreal Forum (1924) and Toronto’s Maple Leaf Gardens (1931). For Shubert, it is only in the post-war suburban context that the hockey arena emerges as a distinct typology, with long-spanning, functionally expressive projects such as the Oakland-Alameda County Coliseum (1966).

Despite the architectural clarity of these arena-type projects, they have not been adopted as primary models for the development of NHL buildings in the late 20th century onward. Instead, explains Shubert, in an age of spectacle and mass consumption, it is projects such as New York’s Madison Square Garden (1968)—focused on expanding functionality—which serve to inform the development of the contemporary corporate-entertainment complexes that have emerged since the 1990s.

Shubert successfully traces ice rinks from their humble origins on naturally occurring surfaces to today’s massive entertainment complexes. With an interdisciplinary approach to the subject, Architecture on Ice is particularly useful in understanding the forces that are driving the contemporary development of these projects. While the opportunities presented by these facilities are often touted, it remains important to highlight the major financial, architectural and urban impacts that can result from their creation.

Andrew Bramm is an architect with Toronto-based MJMA.