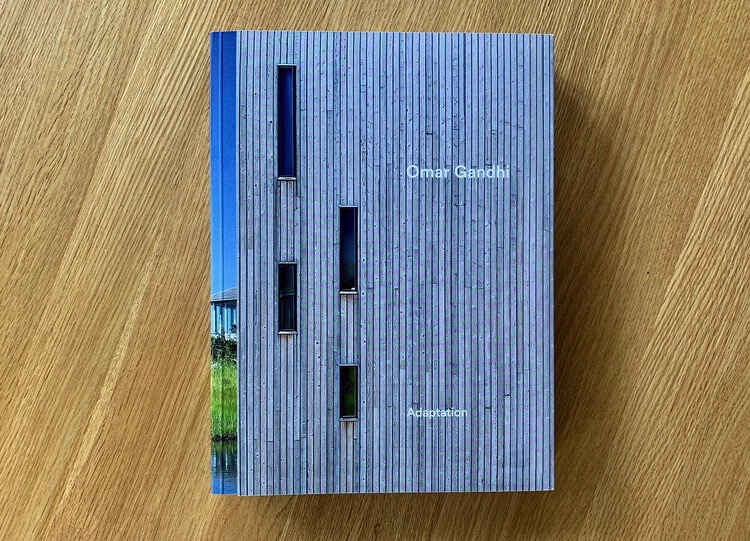 “There is a mythology about the first ten years of young architects in North America,” writes Jimenez Lai in this publication marking the first decade of Omar Gandhi’s Halifax- and Toronto-based firm. This mythology includes a “high-octane, full-speed pursuit of some notion of ‘Project’—filled with teaching, writing […] and various forms of research and experimentation, but not necessarily building buildings.”

In contrast, for Gandhi, “building buildings” defines his practice. John Leroux sees the resulting work as encompassing the “complexities of an uber-Canadian cultural pluralism, where the diversity of his Toronto background dovetails with the traditions and physical vigor of Maritime coastal building traditions.”

When Gandhi found himself out of a job early on in his career, he began to dream about what he wanted to become. Taking on deck and renovation jobs, he eventually arrived at his “beginning,” that pivotal moment when an architect earns the first real client. For Gandhi, it was renovating a home for the new town doctors in Liverpool, Nova Scotia. Then came Shantih, a low-slung cottage in Hunts Point, Nova Scotia. After completing his third project, “running entirely on intuition,” he confesses that “I was able to clearly define what would become my way of working, my process. I called it Adaptation.”

Born in Toronto, Gandhi recounts his parents’ arrival to Canada from India, how he came to study architecture at Dalhousie University, his first real job out of school and his experiences working with KPMB Architects and Brian MacKay-Lyons. There is also the moment when he took on Jeff Shaw, his very first employee. The two of them played Drake’s Take Care album on repeat for a whole year, and eventually produced over a dozen projects together. The acknowledgments and credits at the end of the book show appreciation to those who have helped him along the way: employers and teachers, builders, mentors, classmates and family. Gandhi describes his team as “both the prize and a reflection of a building practice that I would have fantasized about creating when I was just out of school and in my first jobs.” For students and young architects, Adaptation is an inspiration to find and affirm one’s inner architectural calling.