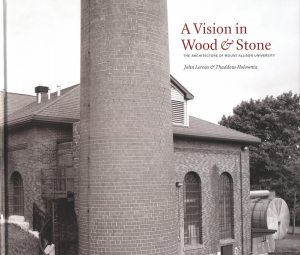 More than anything else, a single colour defines the architecture of Mount Allison University’s picturesque campus in Sackville, New Brunswick. The university’s first building—Samuel Bugbee’s 1843 wood-framed neoclassical home for what was then called the Mount Allison Wesleyan Academy—was built upon a foundation of reddish sandstone. As the university prospered, wood construction gave way to masonry, and Sackville sandstone became the university’s material of choice. A quarry was opened on a nearby farm in 1898, which the university would later purchase in 1930. Over a century later, this colour continues to define the appearance of Mount Allison’s architecture, cladding collegiate gothic, modern and postmodern buildings alike.

Historian John Leroux, MRAIC and photographer Thaddeus Holownia’s A Vision in Wood & Stone offers a meticulous and compelling history of the evolution of the Mount Allison campus. Perhaps its most important contribution is the documentation of Mount Allison’s modernist heyday, when the university acquired its present form during a frenetic postwar building boom. Between 1958 and 1970, nineteen new buildings or major additions were completed on campus. In examining these works, Leroux and Holownia’s tome takes its place along-side recent books such as Robert Mellin’s Newfoundland Modern (2011) and Bernard Flaman’s Architecture of Saskatchewan (2013) in offering a history of Canadian modernism outside the country’s major population and cultural centres.

With its flat roof and Miesian curtain wall, Charles A.E. Fowler’s 1958 Physics and Engineering Building was Mount Allison’s first truly modernist building. A student of Jack Russell at the University of Manitoba, Fowler had returned to join his father’s Halifax-based firm, C.A. Fowler & Co., which had first worked for Mount Allison in the 1920s.

No architect was to have more influence on the Mount Allison cam-pus than the Toronto firm of Brown, Brisley & Brown, beginning with their 1963 campus master plan. If nineteenth-century Mount Allison was defined by its “college row” of buildings facing the town of Sackville from atop a rise, Brown, Brisley & Brown’s master plan turned the campus inside-out by establishing the central quad that now forms its most distinctive landscape. Whereas Fowler’s early modern buildings had used a wide material palette, Brown, Brisley & Brown chose to return to the distinctive red sandstone as a means of harmonizing new and old constructions.

Brown, Brisley & Brown would ultimately design or renovate ten major campus buildings, a substantial contribution from an Ontario firm previously known for its ecclesiastical work. If an inward-facing master plan and use of red sandstone defined the campus’s overall form, its 1965 university chapel provides its jewel. Leroux justly praises it as “not only the most beautiful modern building in New Brunswick, but one of the most architecturally inspirational as well.” Situated in the heart of the newly established central quad, the Greek-cross plan chapel serves as the campus’s spiritual and spatial focal point. Immaculately detailed and materially flawless, the chapel’s most stunning architectonic feature is its vertical strips of stained glass, used as infill between the chapel’s four main concrete columns and its red sandstone exterior walls. Worthy of a place alongside other masterpieces of Canadian campus modernism, the chapel is deserving of far greater renown than it has enjoyed to date.

Unsurprisingly for a university whose reputation for excellence in the arts dates to the nineteenth century, Mount Allison’s great modernist buildings have featured spectacular artworks. Of particular note are Lawren Harris’s five abstract tile mosaics (sadly, only one survives today), Anne Kahane’s wooden relief Sculptural Wall (1961) and two murals by Alex Colville. Until it was moved to the university’s Owens Art Gallery, Colville’s Athletes (1960) greeted students in the lobby of the university athletic centre. A “monumental tour de force of geo-metrical balance and composition,” the triptych adorned a f luted wall designed by the artist.

The highlight of A Vision in Wood & Stone is undoubtedly its spectacular visual portfolio. Historic photographs gathered mainly from the Mount Allison University Archives (the earliest a circa-1843 daguerreotype of Bugbee’s Academy building) are seamlessly juxtaposed with Holownia’s documentation of the campus buildings in their current form. Holownia’s restraint is striking: he evidently laboured to harmonize the visual language of his black-and-white photographs with their antecedents. Each is given an equivalent graphic presentation within the book, creating a sense of historical continuity marked by continuous evolution.

It is this continual evolution that makes Mount Allison a worthy subject for such a meticulous study. As the book notes, every single one of Mount Allison’s current buildings replaced an earlier structure. Often, fire was the driver behind the campus’s architectural development: between 1866 and 1972, Mount Allison lost twelve buildings in conflagrations. In other cases, older buildings were torn down to make way for newer replacements. This was the case for Mount Allison’s most recent building, Zeidler Partnership’s Purdy Crawford Centre for the Arts (see CA, March 2015), which replaced Andrew Cobb’s 1927 Memorial Library and C.A. Fowler’s 1960s Tweedie Annex. While the loss of the former Tudor Gothic work was widely lamented, the latter’s destruction passed largely without mention, despite it being an admirable work of campus modernism. This speaks to a larger malaise in the Maritime Provinces, which seem ill at ease with their modern heritage—perhaps because of the uncertain economic and social fortunes that modernity has brought.

Above all, the public controversy surrounding the Crawford Centre testifies to the importance Allisonians and Sackvillians place upon their built surroundings. From their passion, an impressive campus and many of Canada’s great university buildings have resulted.

Peter Sealy is a PhD candidate at Harvard University, and teaches at the University of Toronto.

Book Review: The Measure of Darkness