Book Review: A View from the Porch 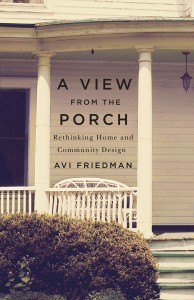 A View from the Porch: Rethinking Home and Community Design

Over several decades, architect, professor and newspaper columnist Avi Friedman has been considering the evolution and future of Canadian residential developments. His latest book is a series of vignette-like essays that look at myriad aspects of the home—from the history of mass-produced housing to the introduction of decking made of recycled plastic.

Friedman’s reflections take us around the globe, with stops including his childhood town in Israel, a single family house in China, the appliance section of the Dallas Home Show, and a bustling bazaar in Istanbul. However, his stories unfailingly return to a singular focus: the North American house.

For many reasons—but principally for its lack of human scale—Friedman is critical of the ubiquitous car-oriented suburb. But instead of an outright condemnation, he explores the source of the problem, diving into the economic and social reasons for the suburb’s emergence in the postwar period and its continued proliferation today.

He also looks at alternatives: from the dense, flexibly configured row houses in his hometown of Montreal, to developments that are innovating on suburban norms. The small community of Senneville, Quebec, for
instance, is implementing design guidelines to preserve its historic character. An entrepreneur in Cornwall, Ontario, is rehabilitating a series of abandoned industrial buildings into apartments. A pair of retired architects is transforming a 100-acre lot near Quebec City into a model sustainable development where trees matter as much as houses.

In each case, Friedman approaches his subject with a warm, personal tone that makes this book an accessible and thoroughly enjoyable read.