David Chipperfield, Bjarke Ingels, Behnisch Architekten, and Renzo Piano are among the six finalists who will present their designs for the Parliament-facing site on Facebook Live. 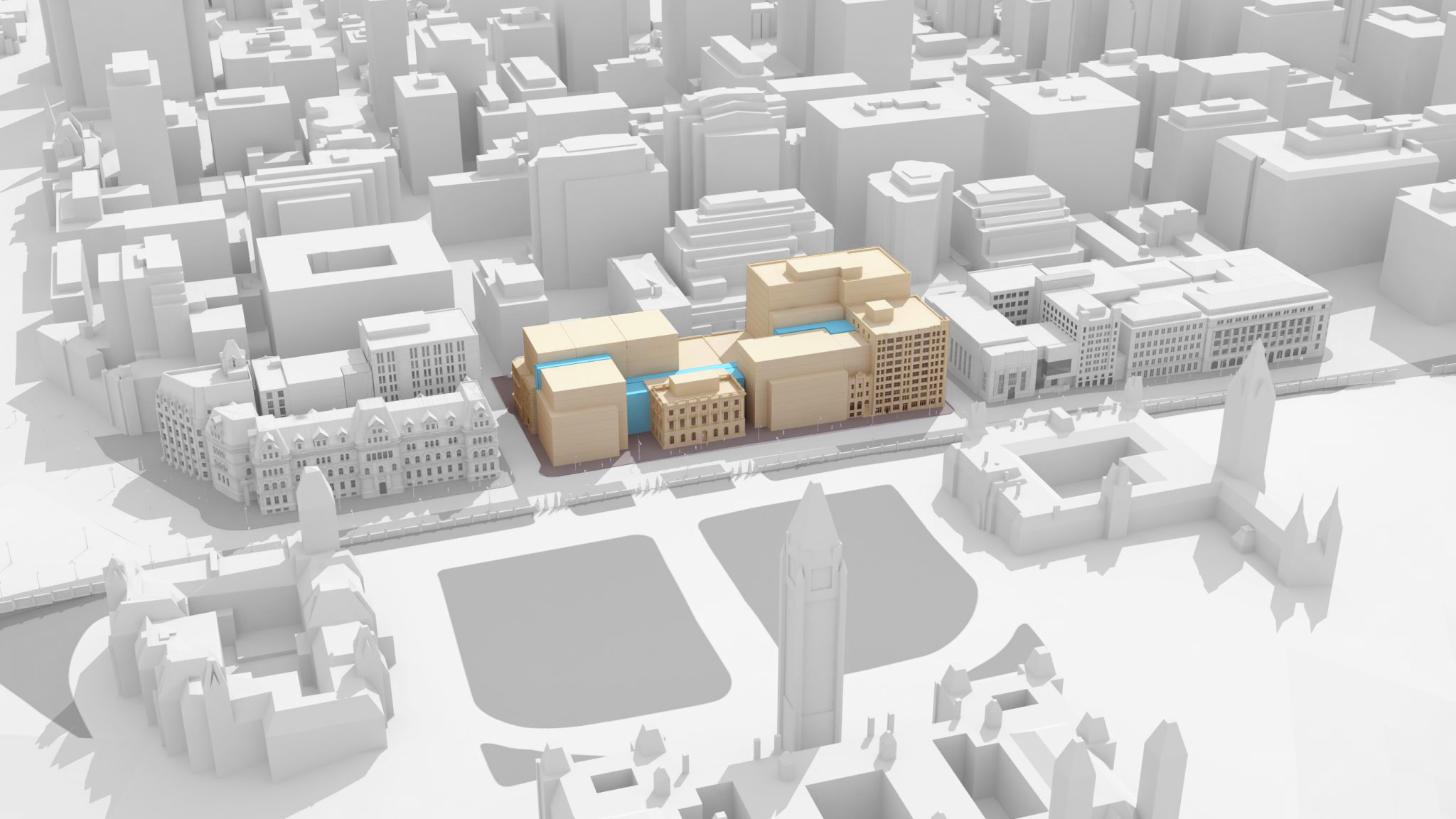 Few sites carry the significance of Block 2, the full city block directly opposite Canada’s Parliament buildings, just south of Parliament Hill. To the north, it faces the Centre Block and its Peace Tower. The renewal of Block 2 is a critical piece of PSPC’s Long Term Vision and Plan for the Parliamentary Precinct. A design competition, launched in spring 2021, ensures that the final design for this city block brings forward new vitality to a significant part of Confederation Boulevard. The goal is to transform this mix of buildings into an innovative complex that will meet the needs of Parliament and the public now and into the future.

On Monday, April 11, from 10 am to 1 pm, the six finalist competitors will speak to their vision for this prominent space in Canada’s capital.

The finalists who will be presenting are:

The video will be live-streamed on Facebook at this link.

Block 2 is the city block immediately south of Parliament Hill in downtown Ottawa, nestled in the heart of Canada’s Parliamentary Precinct. It faces Parliament’s Centre Block and its Peace Tower to the north, and is bounded by Metcalfe, Wellington, O’Connor and Sparks streets.

The redesigned block will provide office space for the Senate and the House of Commons and will allow for the future consolidation of parliamentary accommodations, including space for the Library of Parliament. It will also include renovated retail space in the Sparks Street Mall.

“I’ve always known that at some point we would get around to filling in the biggest missing piece—which was what we now call Block 2, but we could also call the fourth side of Parliament Square, or the closing of Parliament Hill,” says John Ralston Saul, Honorary Jury Chair. “I realize that there is the whole utilitarian aspect to what the building on Block 2 will have to be and do [in containing Parliamentary offices, among other functions]. And we know that the Sparks Street side of the building will be some kind of architectural palimpsest, given the number of protected buildings.”

“But the Wellington side—the Fourth Side of Parliament Square—cannot help but call for drama, inspiration, and frankly, magic. There has to be something astonishing about what is done there, which will fit in with the magic of the other three Parliament buildings. This is an opportunity to do something completely different,” says Saul.

Two of the eleven buildings in Block 2 are dedicated to the development of an Indigenous Peoples’ Space. While these buildings stand independently from the design competition, the aim is to ensure the design and construction for the entire block honours and respects the significance of the space.

“The disjointed block facing Parliament Hill contains multiple heritage buildings of varied quality, and some empty lots. Critically, it is split into two parts by the former American Embassy and the CIBC Banking Hall; both buildings and the space between them have been gifted to Canada’s First Nations, Inuit and Métis as an Indigenous Peoples Space (IPS) at the heart of the Parliamentary Precinct,” writes Jury chair Bruce Haden. “As the discussions about the future form and use of the IPS are ongoing, the competition rules set up this portion of the site as an excluded zone. However, the current Canadian conversations about Reconciliation—and the prominence of the IPS on the site—means that the competitors must grapple with the potent issue of the relationship between Indigenous peoples and the Canadian nation-state.”

The presentations on April 11 will be made available publicly and feedback on the six design schemes is welcomed through e-mail at   [email protected].

The winning project will be selected by a competition jury at the end of April.

To learn more about the Block 2 design competition, visit: https://www.tpsgc-pwgsc.gc.ca/…/conception-design-eng.html