Six finalists presented their designs for the Parliament-facing site in an online forum on Monday.

On Monday, April 11, the six finalist competitors for the design of Block 2, the full city block directly opposite Canada’s Parliament buildings, unveiled their visions for this prominent space in Canada’s capital. Their presentations are available to view here.

Few sites carry the significance of Block 2, facing the Centre Block and its Peace Tower. The renewal of Block 2 is a critical piece of PSPC’s Long Term Vision and Plan for the Parliamentary Precinct. A design competition for the site was launched in spring 2021. The goal is to transform this mix of buildings into an innovative complex that will meet the needs of Parliament and the public now and into the future.

The six finalist entries are:

The proposal weaves together old and new to create a rich tapestry of past, present and future. In the spirit of responsible stewardship, existing structures are given fresh purpose. The value of this built heritage is unlocked by new net-zero buildings and public spaces that represent a bold new architectural expression of Canadian identity. Together, this new complex exemplifies the future of a sustainable and inclusive Canada. Layers of old are married to layers of new. The plurality of form of these polychromatic buildings represents and celebrates a diverse nation. 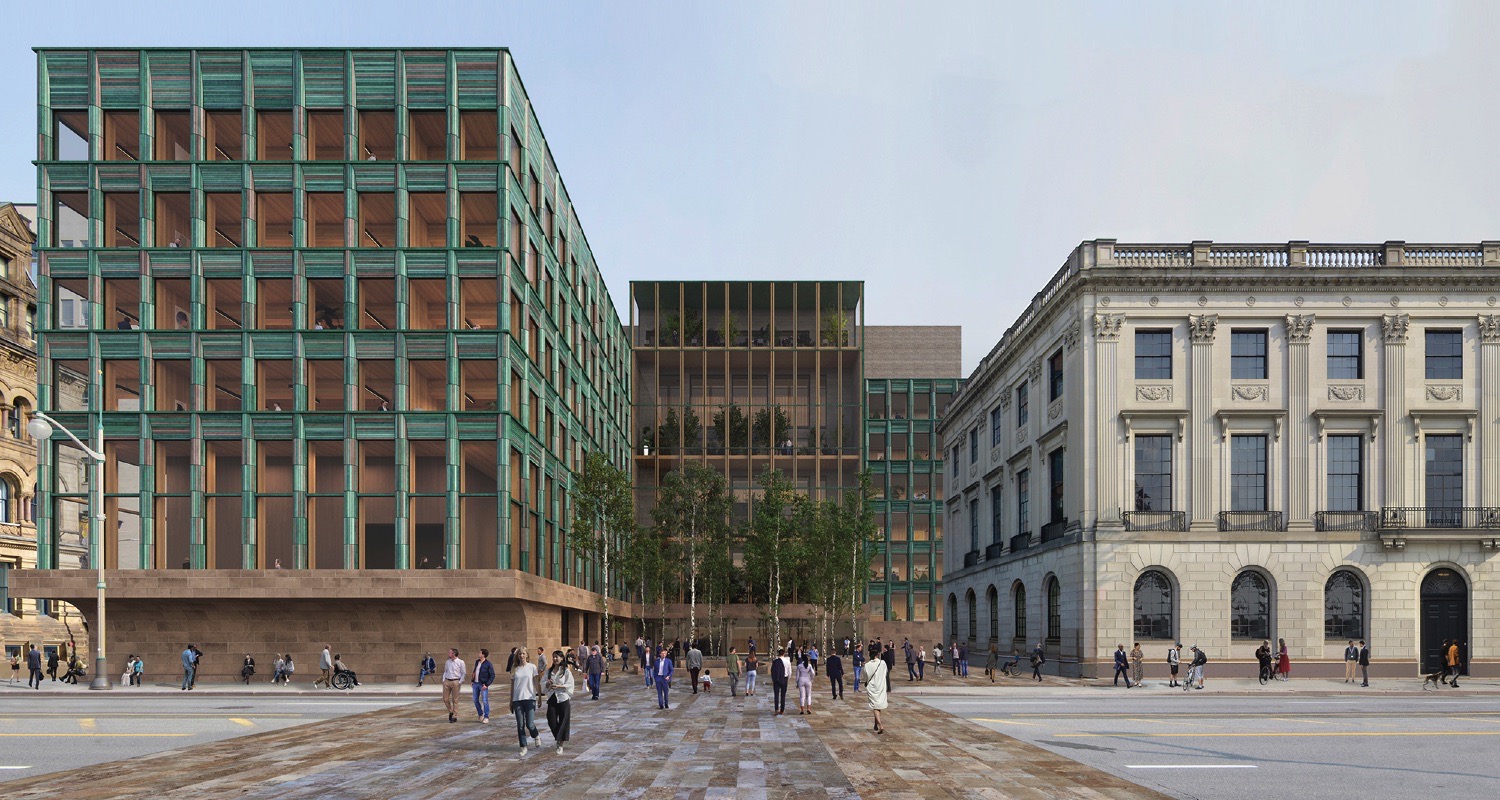 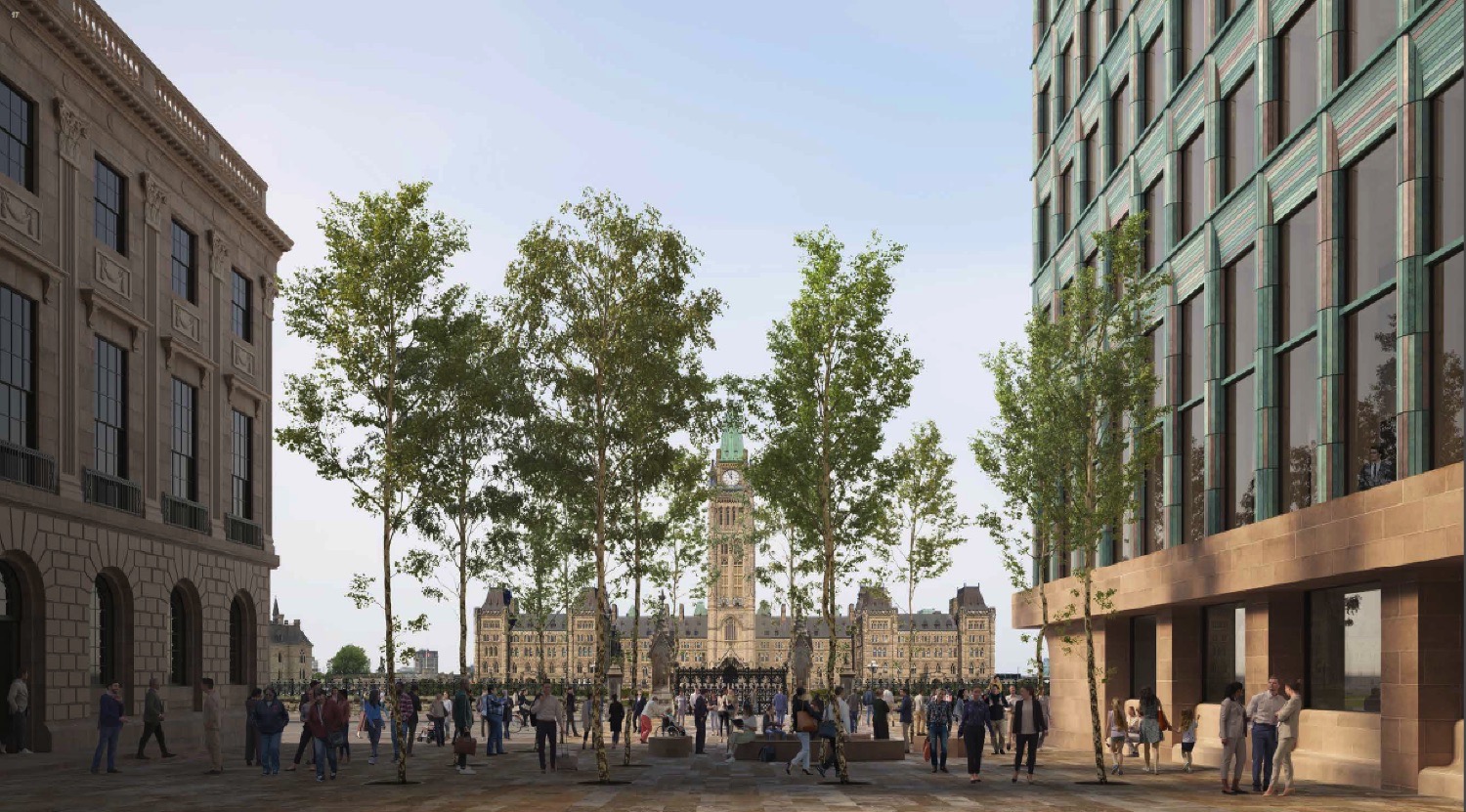 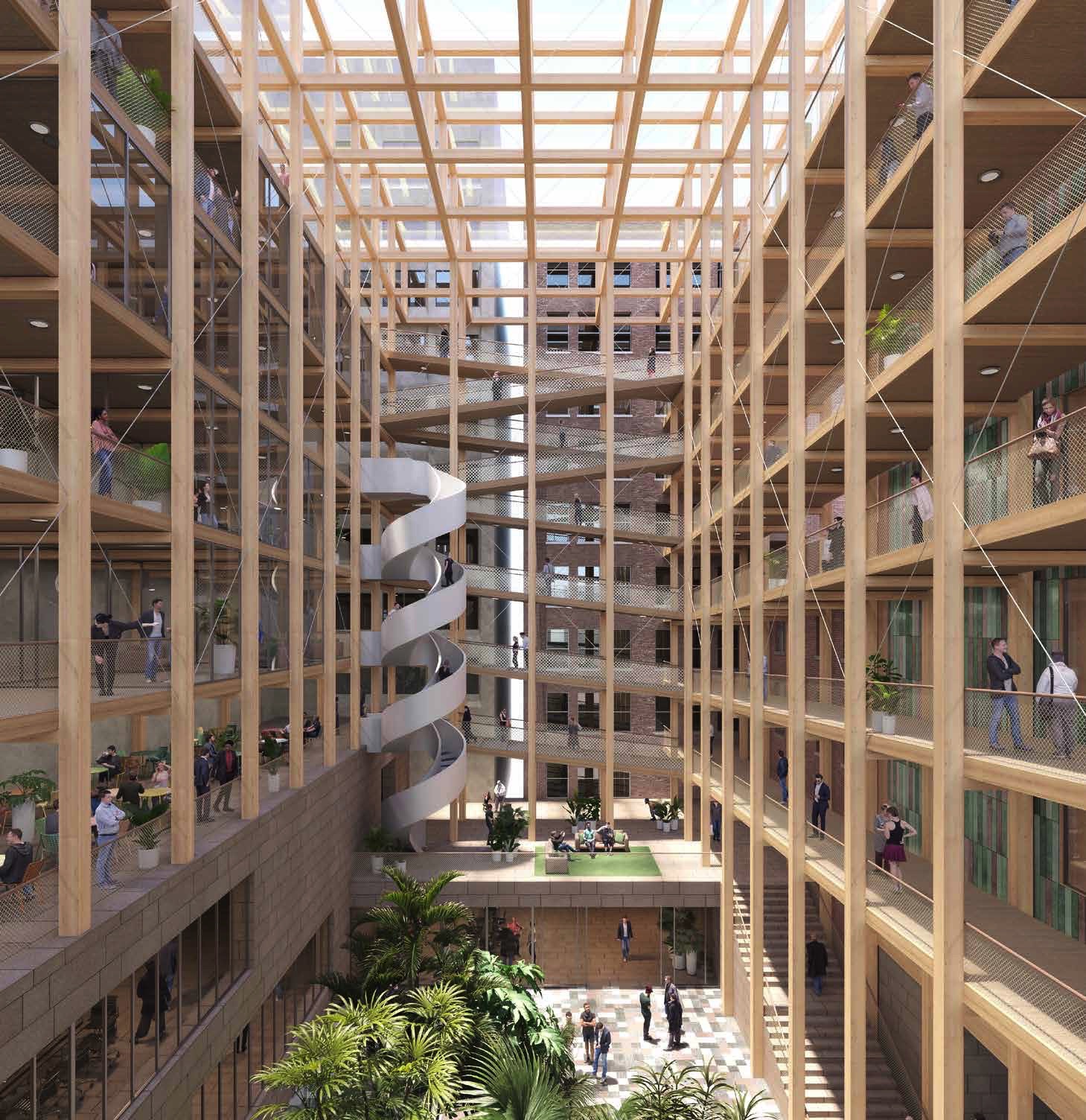 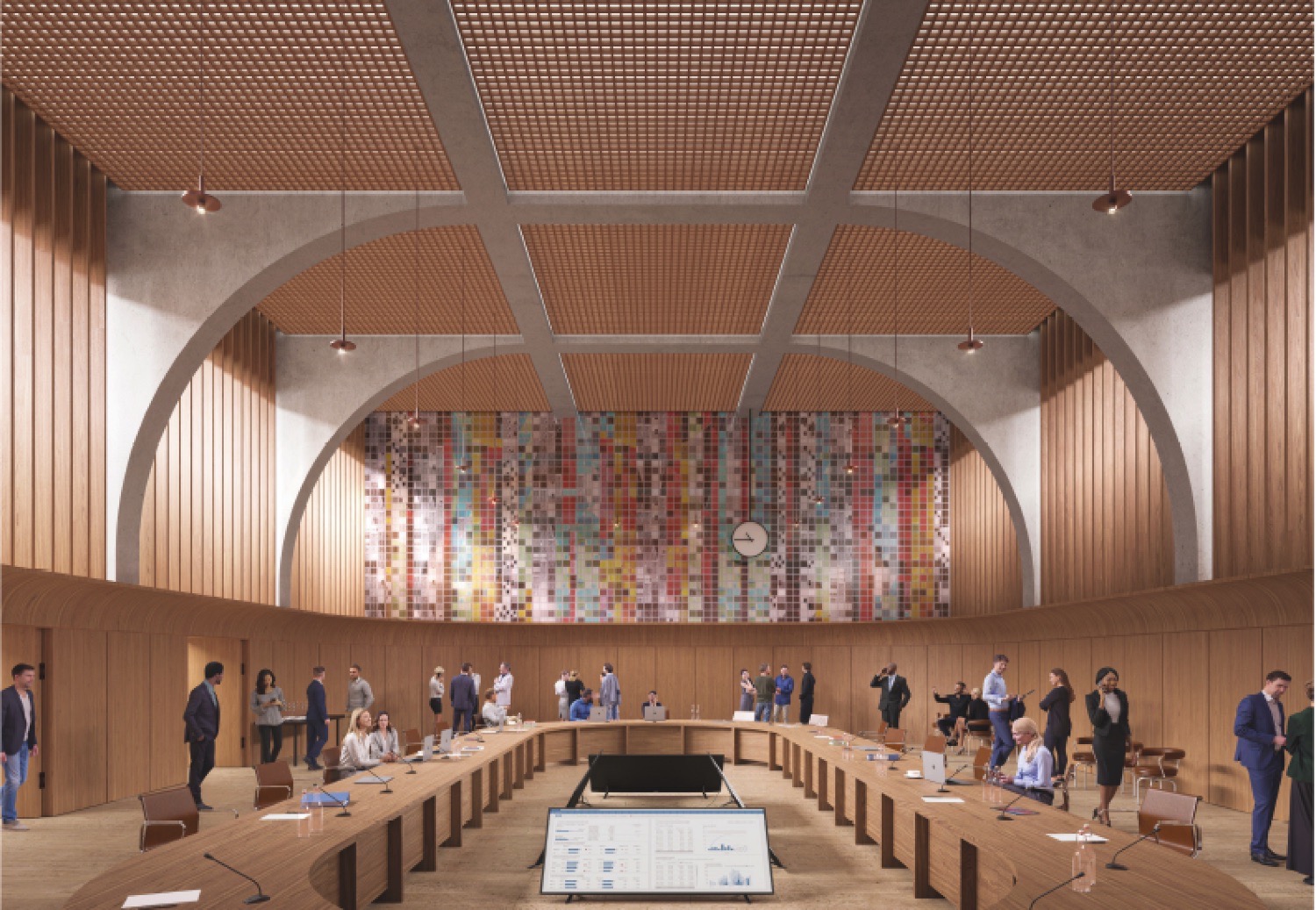 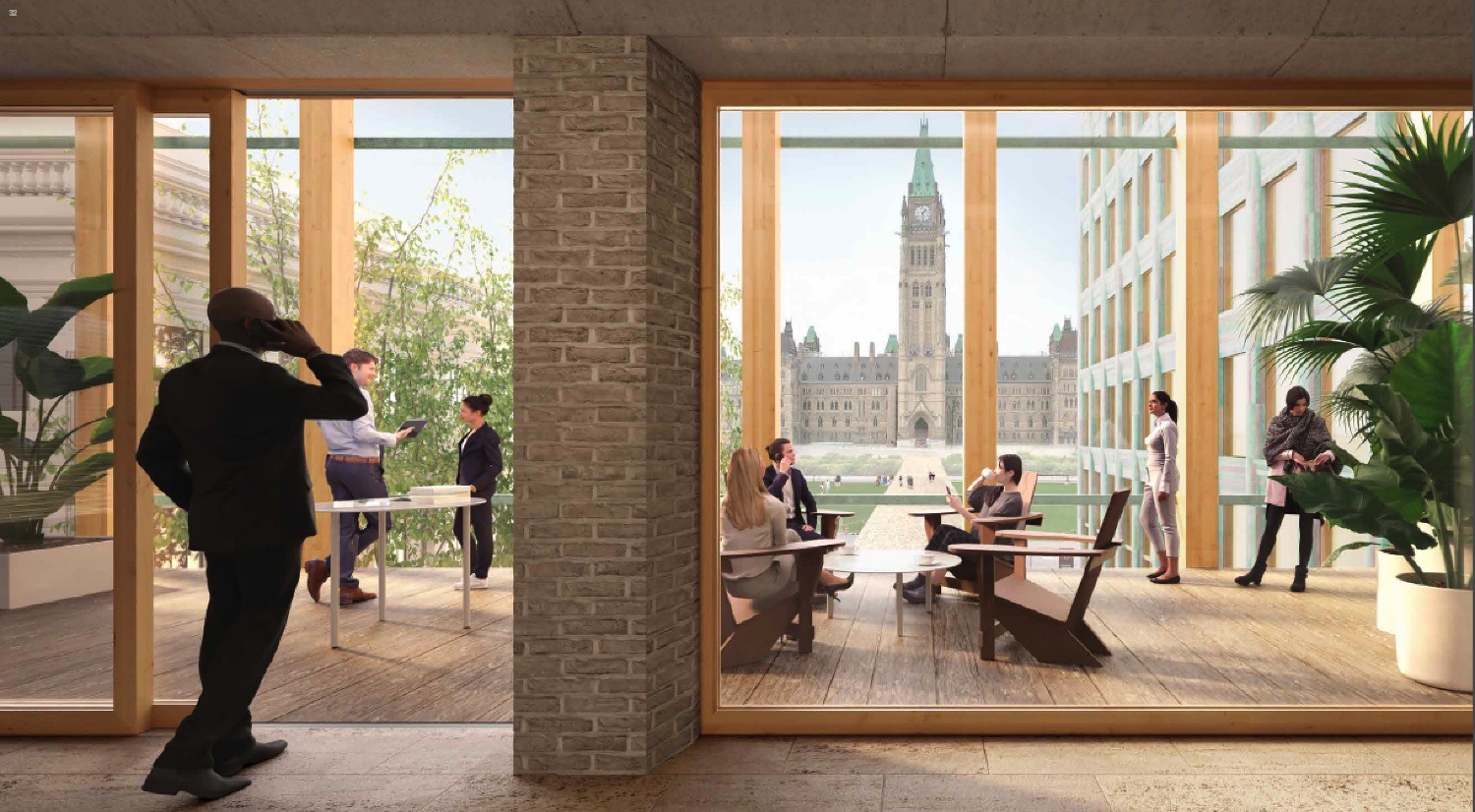 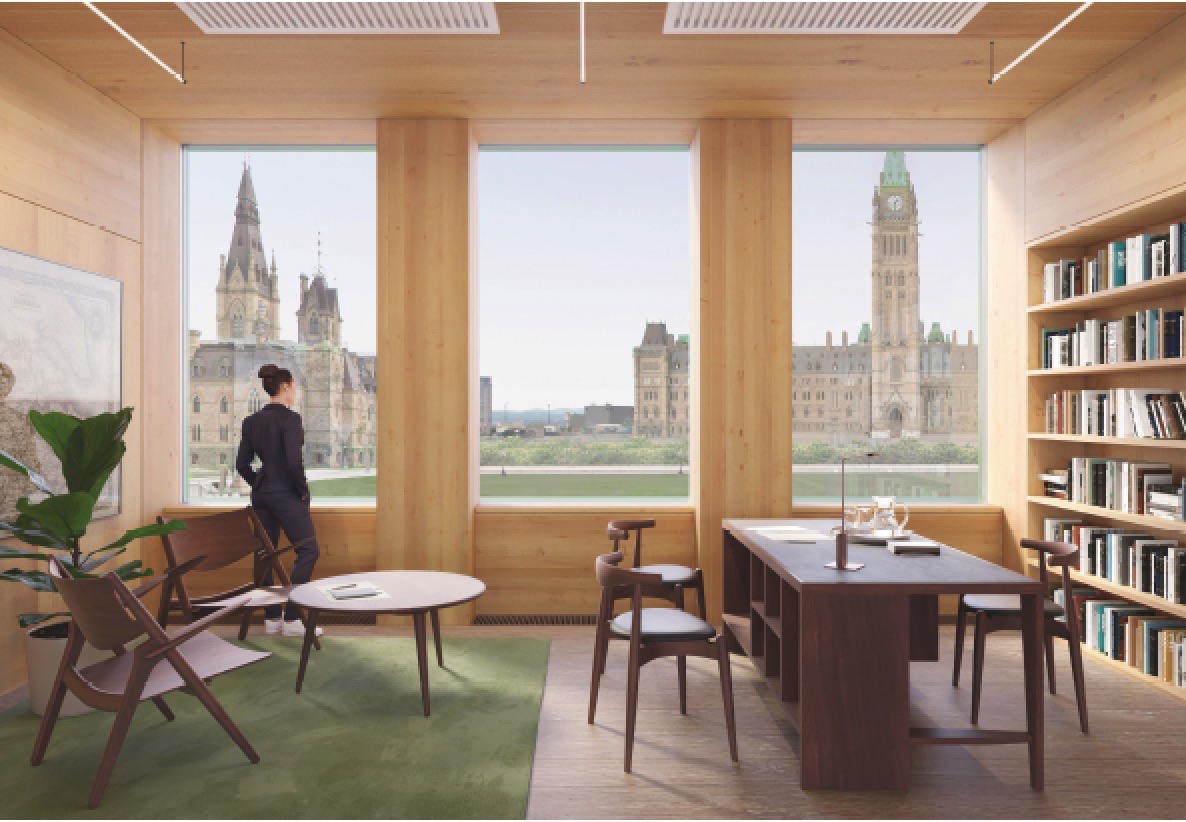 The proposal maintains the gesture of plazas setback and adjacent to the Indigenous People’s Space (IPS), with an approach that calls attention to the IPS without dominating the elevation. The strategy of mansard roofs which picks up the character of government buildings on Block 1 and Centre Block extends to the façade along Wellington. Two new plazas on Wellington gently guide inhabitants to the building entrances, while the massing retains a strong street wall that leans back at the same datum as the adjacent Block 1. 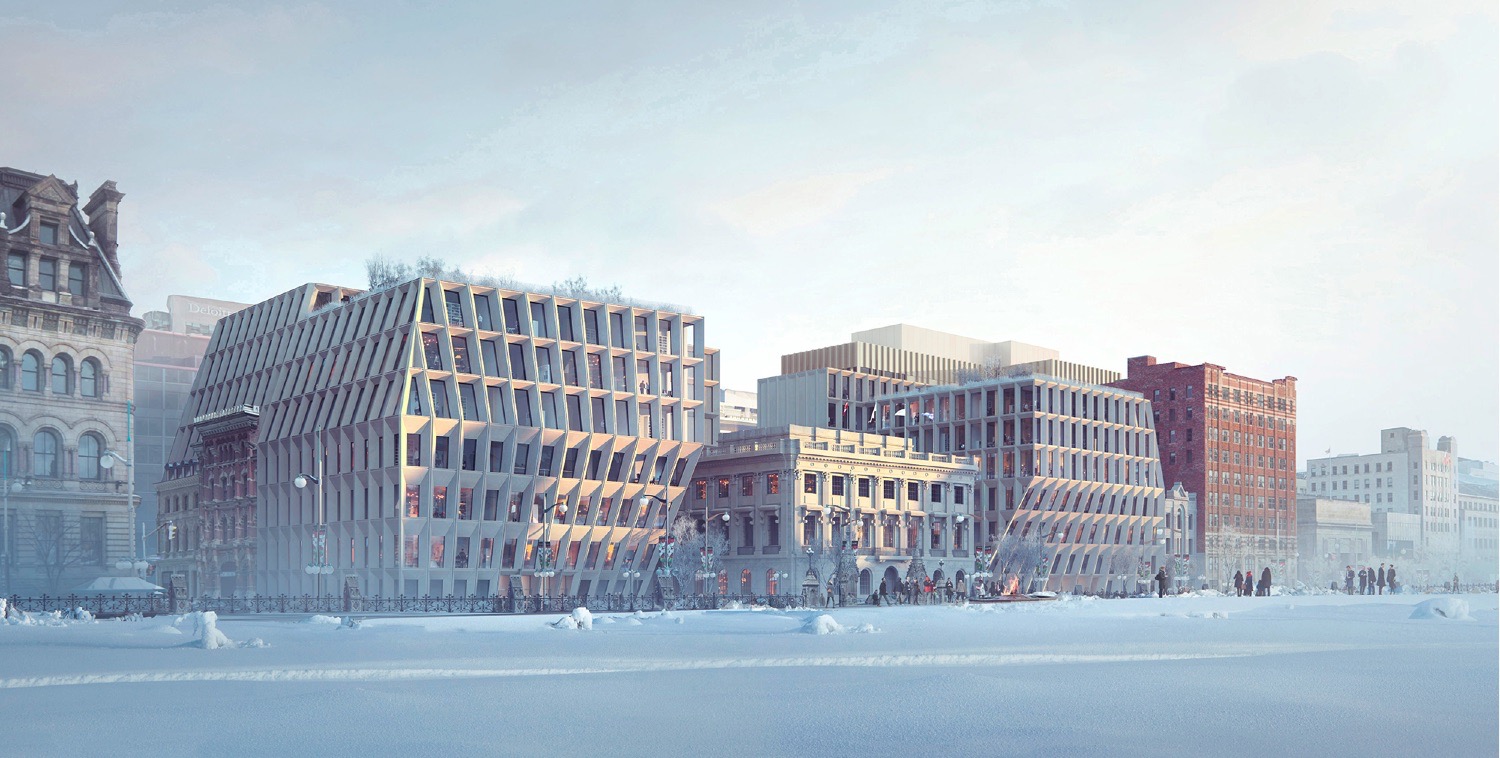 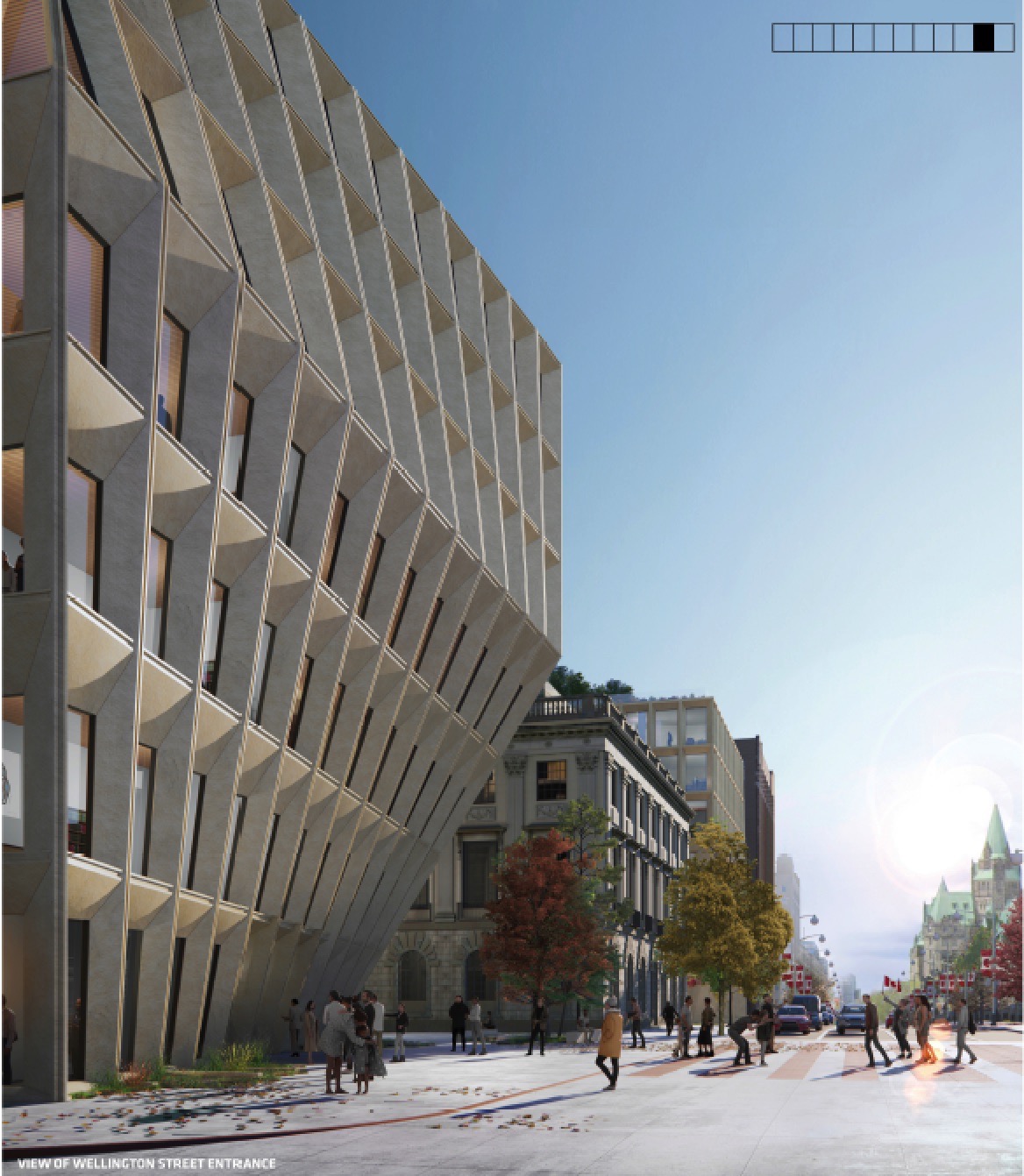 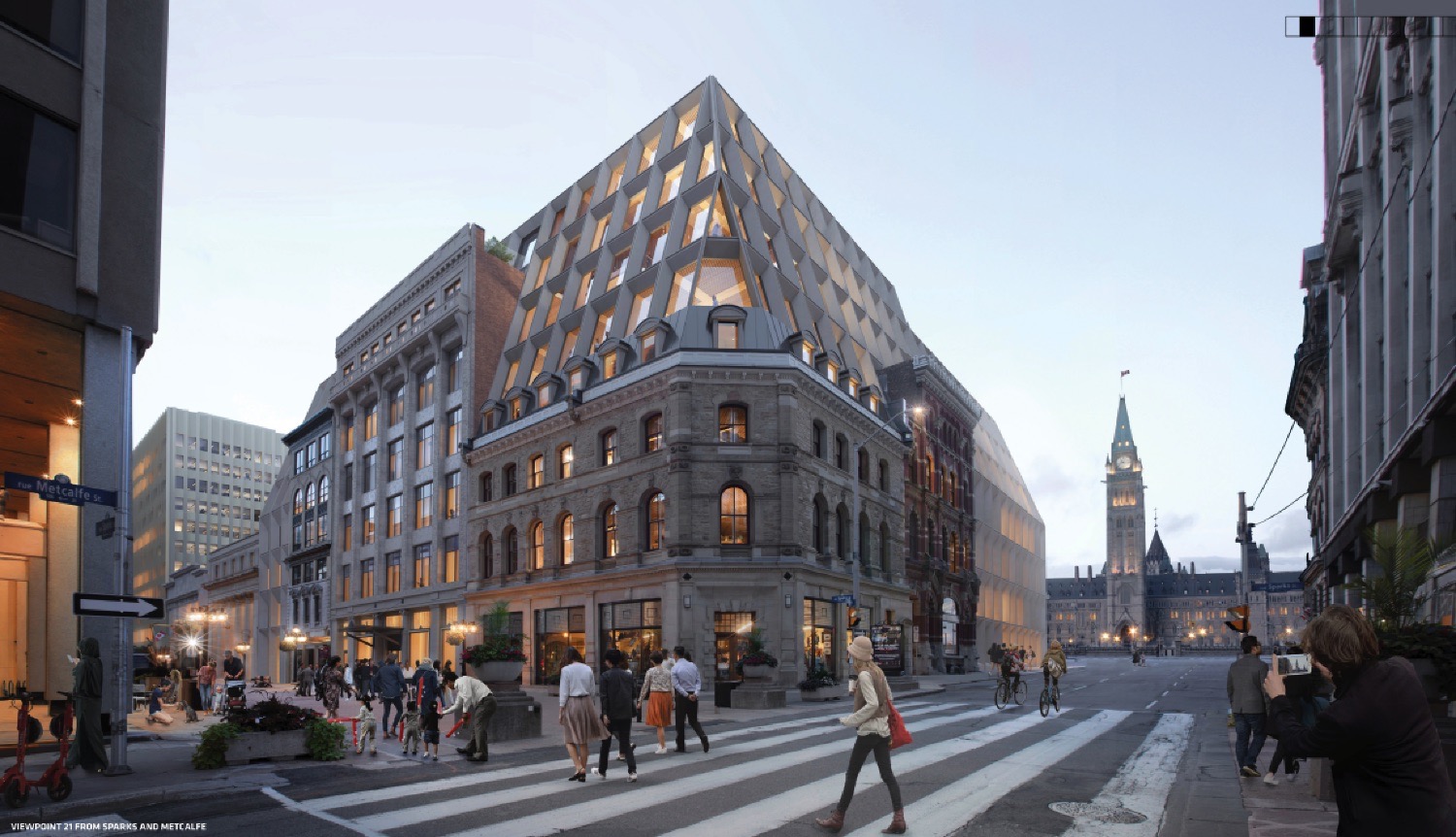 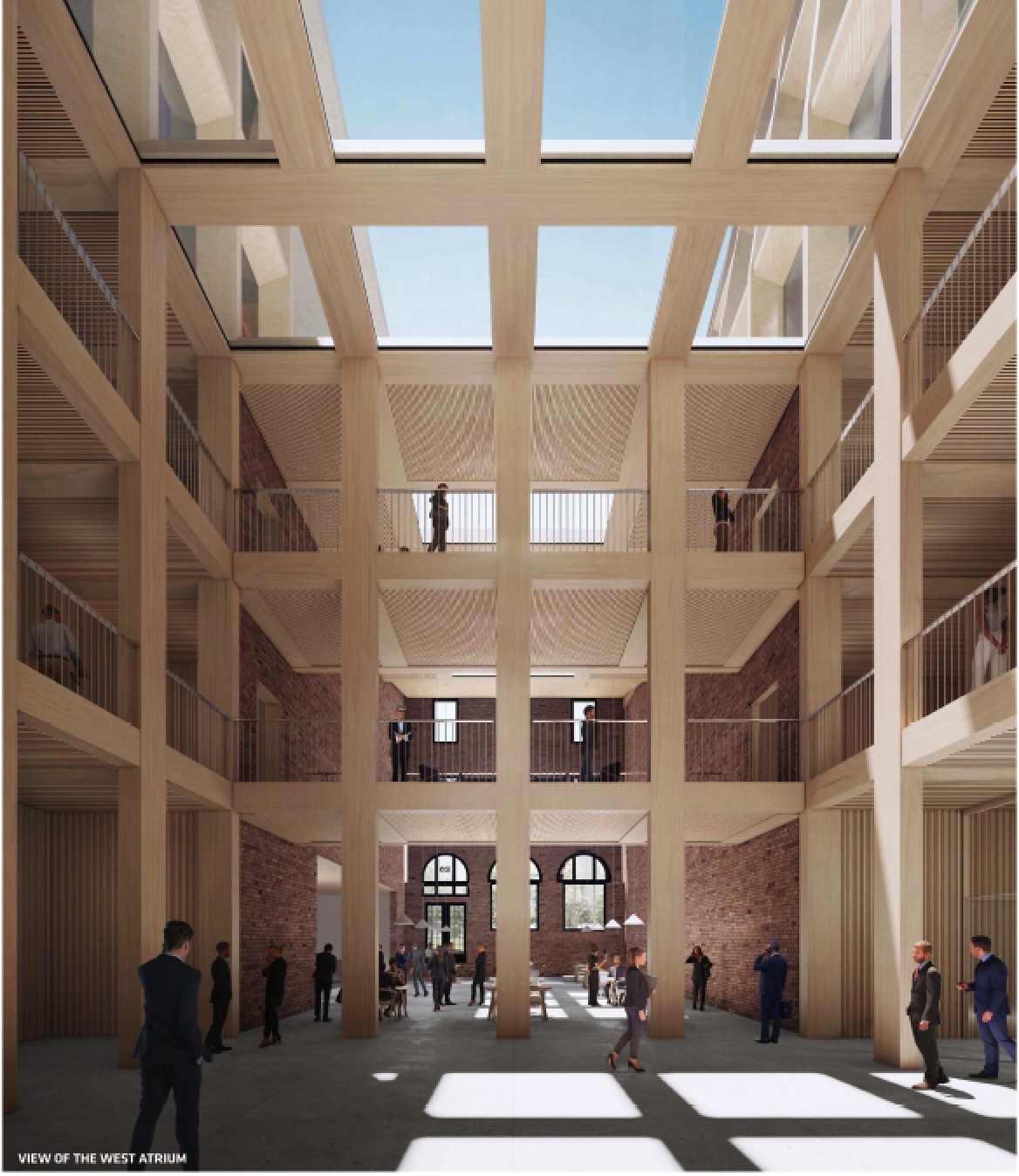 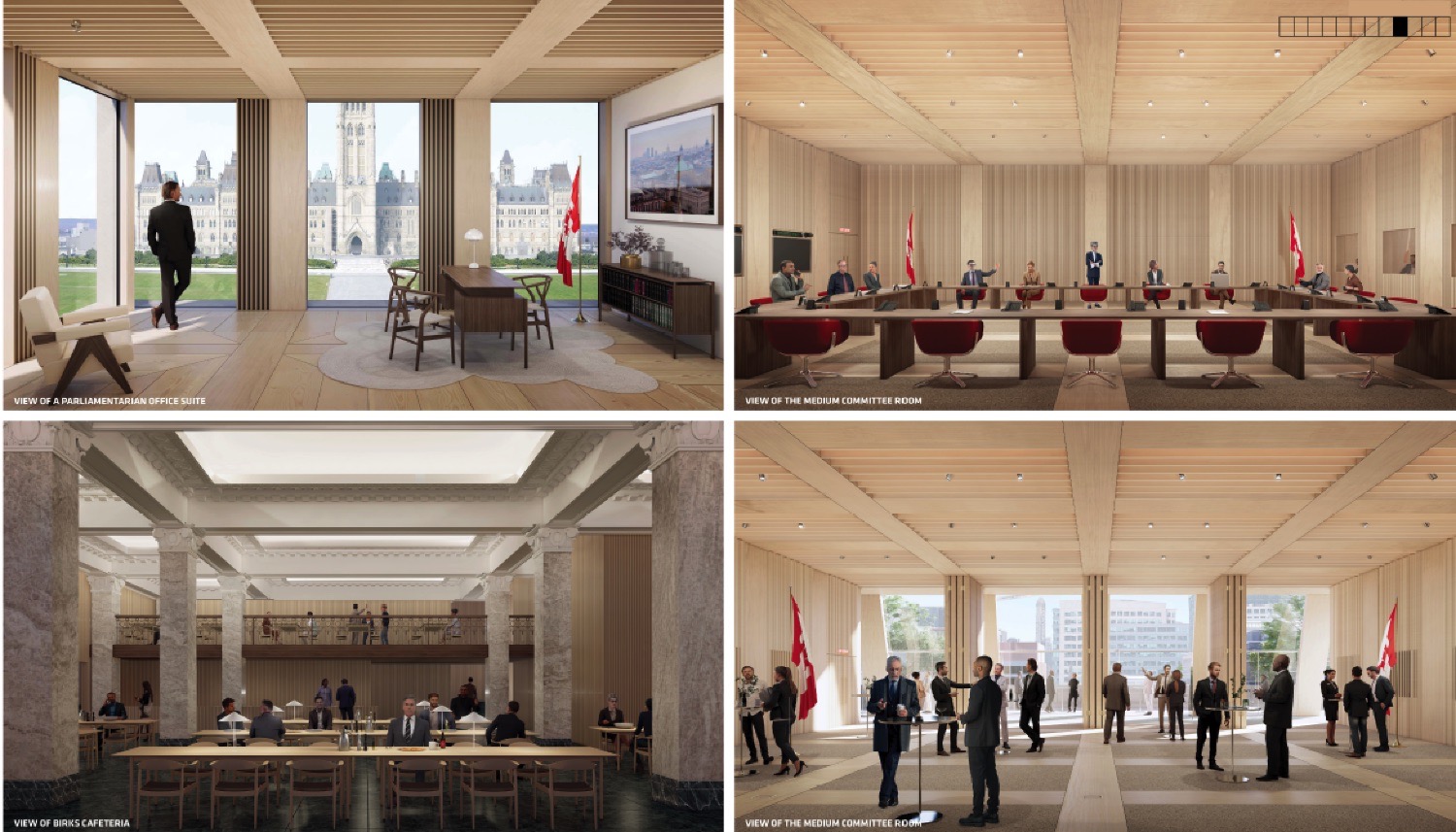 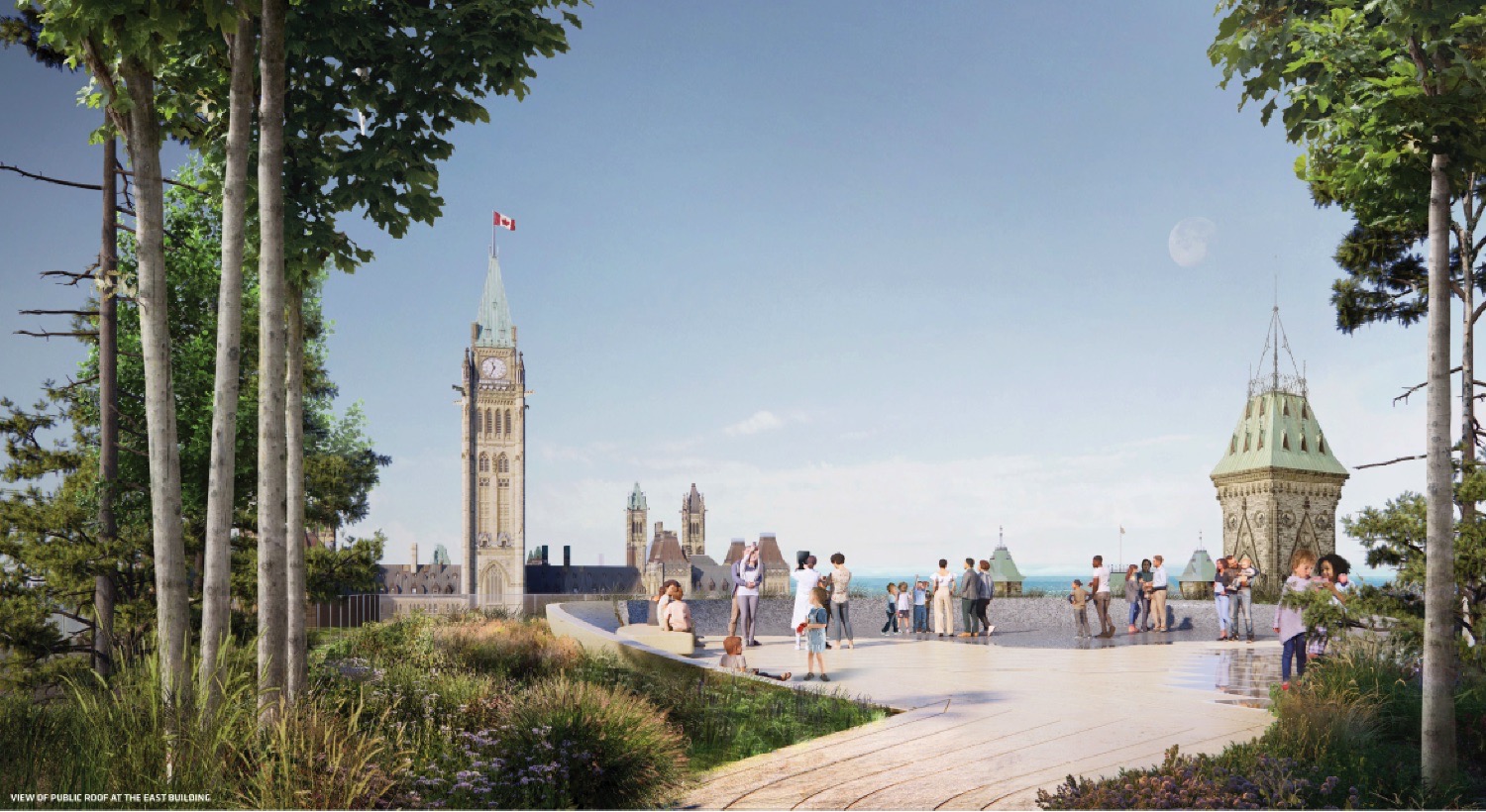 This proposal seeks to authentically Reconcile relationships with Indigenous Peoples and the lands through conveying a sense of place steeped in Indigenous ways of knowing. Through the traditional teachings shared in the circle, the proponents aim to bring people together and encourage everyone to share and bring life to the public spaces and cultural celebrations at the “Gathering Place of Many Nations.” It proposes to Renew the historic relationship between “Town and Crown” by introducing an audacious new national symbol in the form of a vertical, stacked, light-filled agora housing Committee Rooms, entitled the “Truth and Reconciliation Tower”. 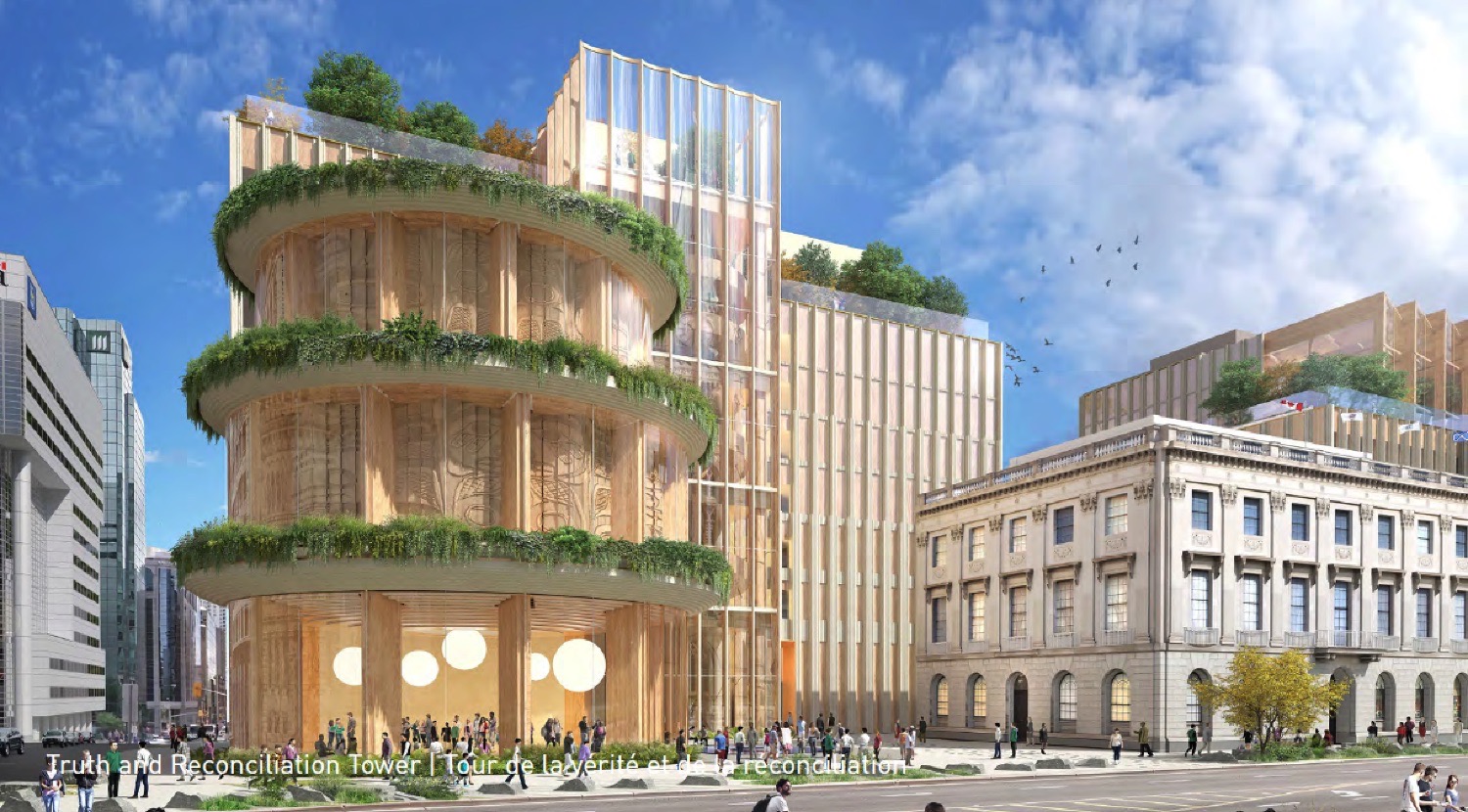 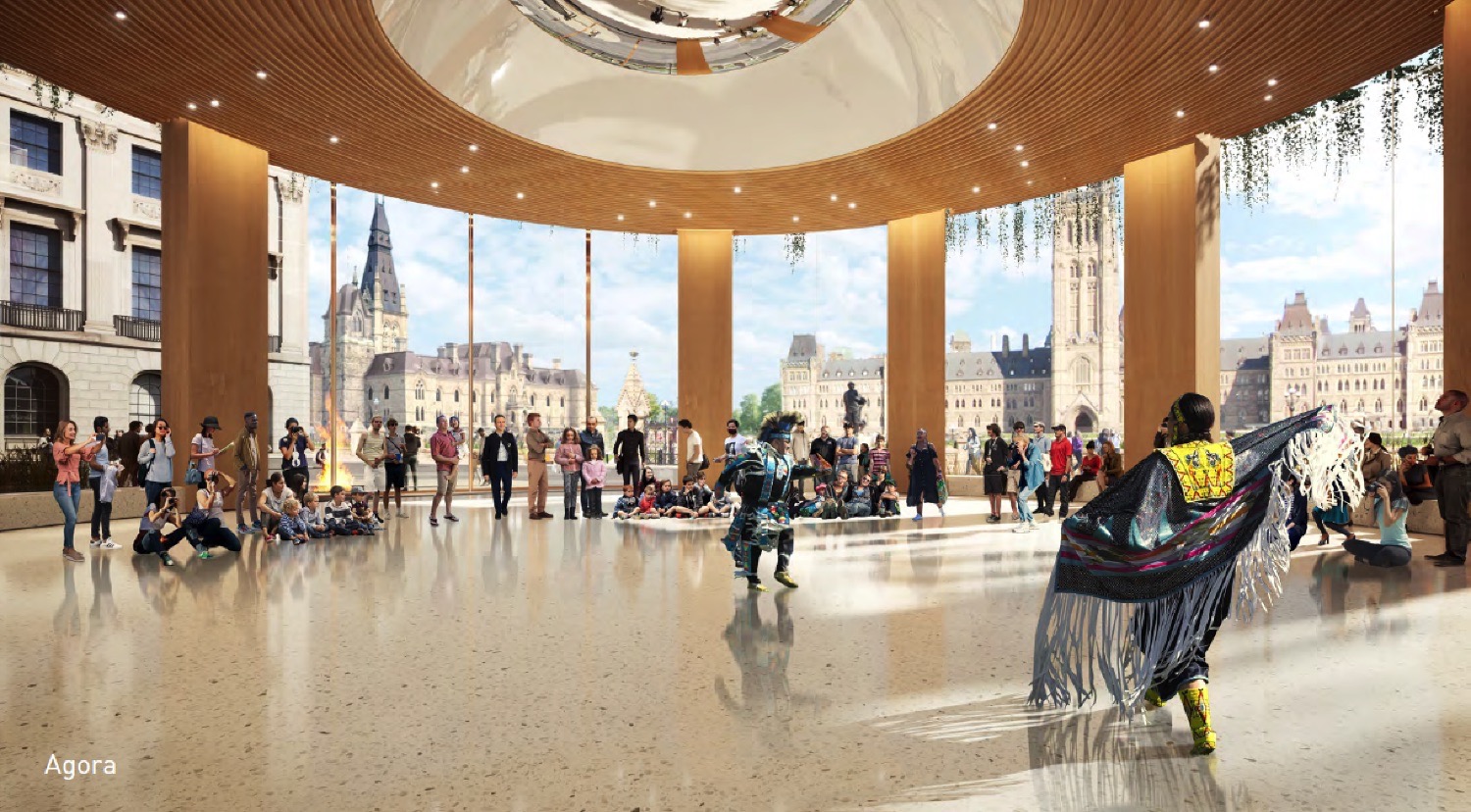 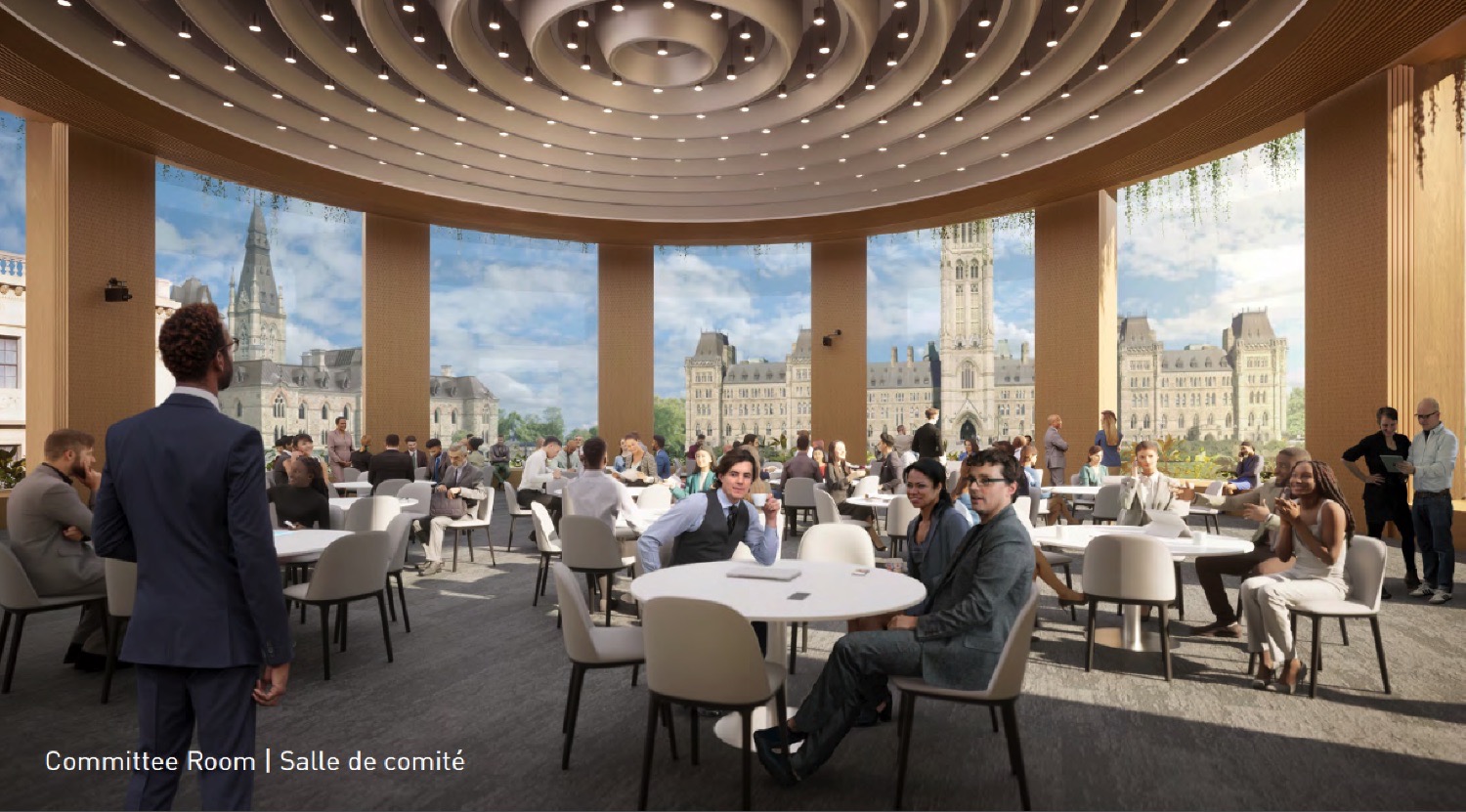 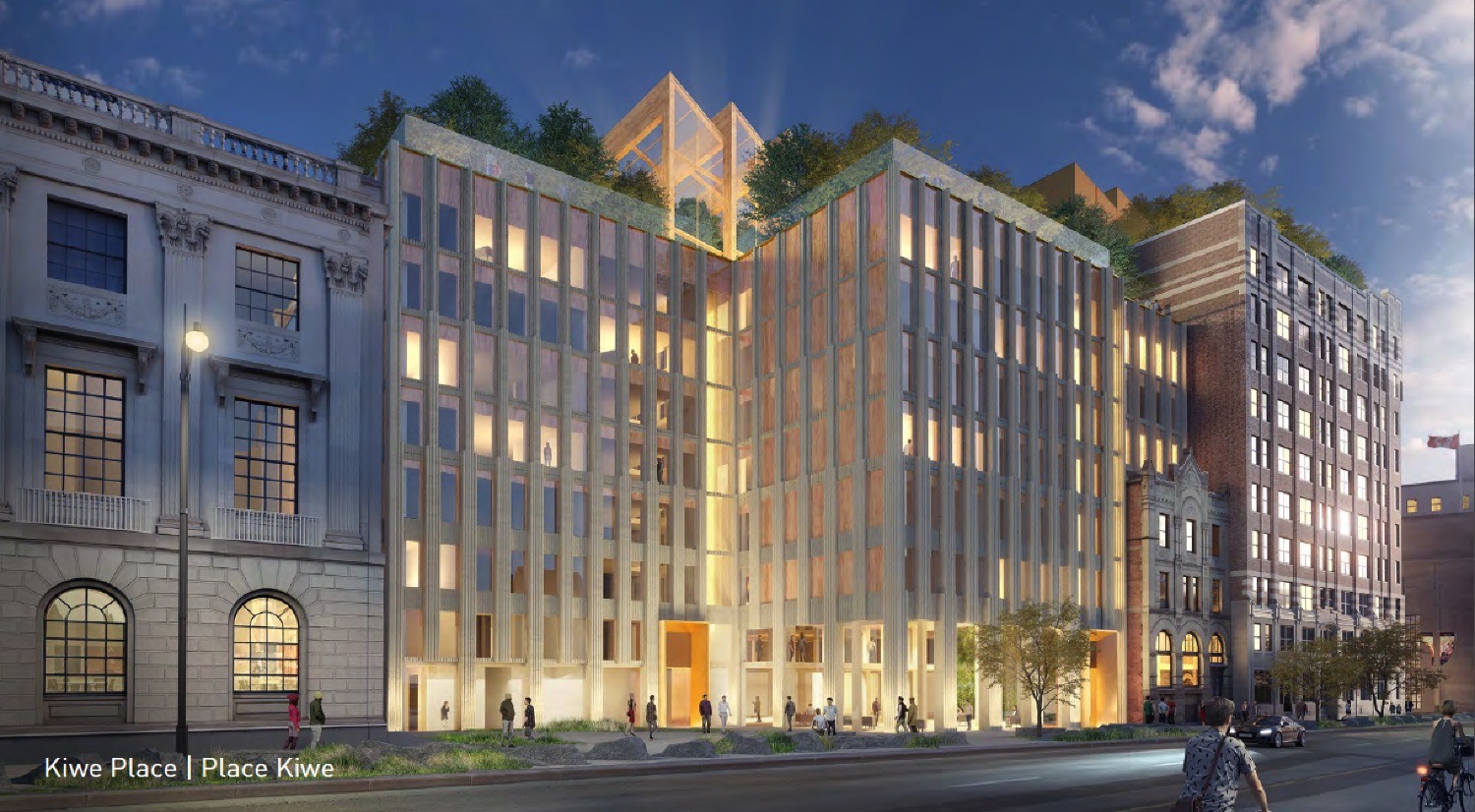 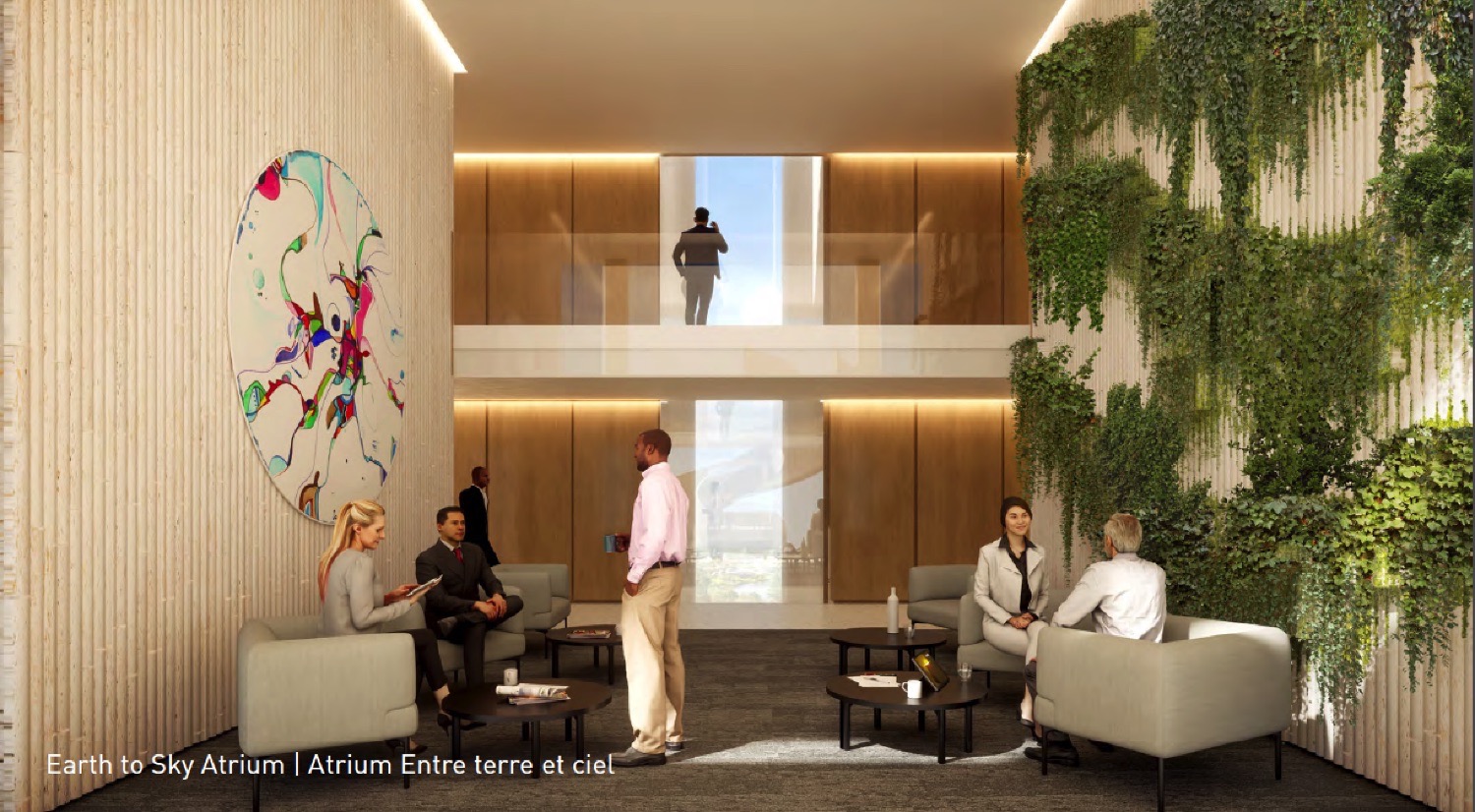 This proposal holds that a building for transparent decision-making should be equally democratic in its organization. The design is not meant to be monumental. Rather, it offers diverse, egalitarian spaces—formal and informal, built and natural, large and small – for congregation, representation and dialogue. A strategy of wintergardens at varying levels provide air, daylight and a feeling of closeness to nature, while infusing the vast office program with places of respite, collaboration, and environmental quality. 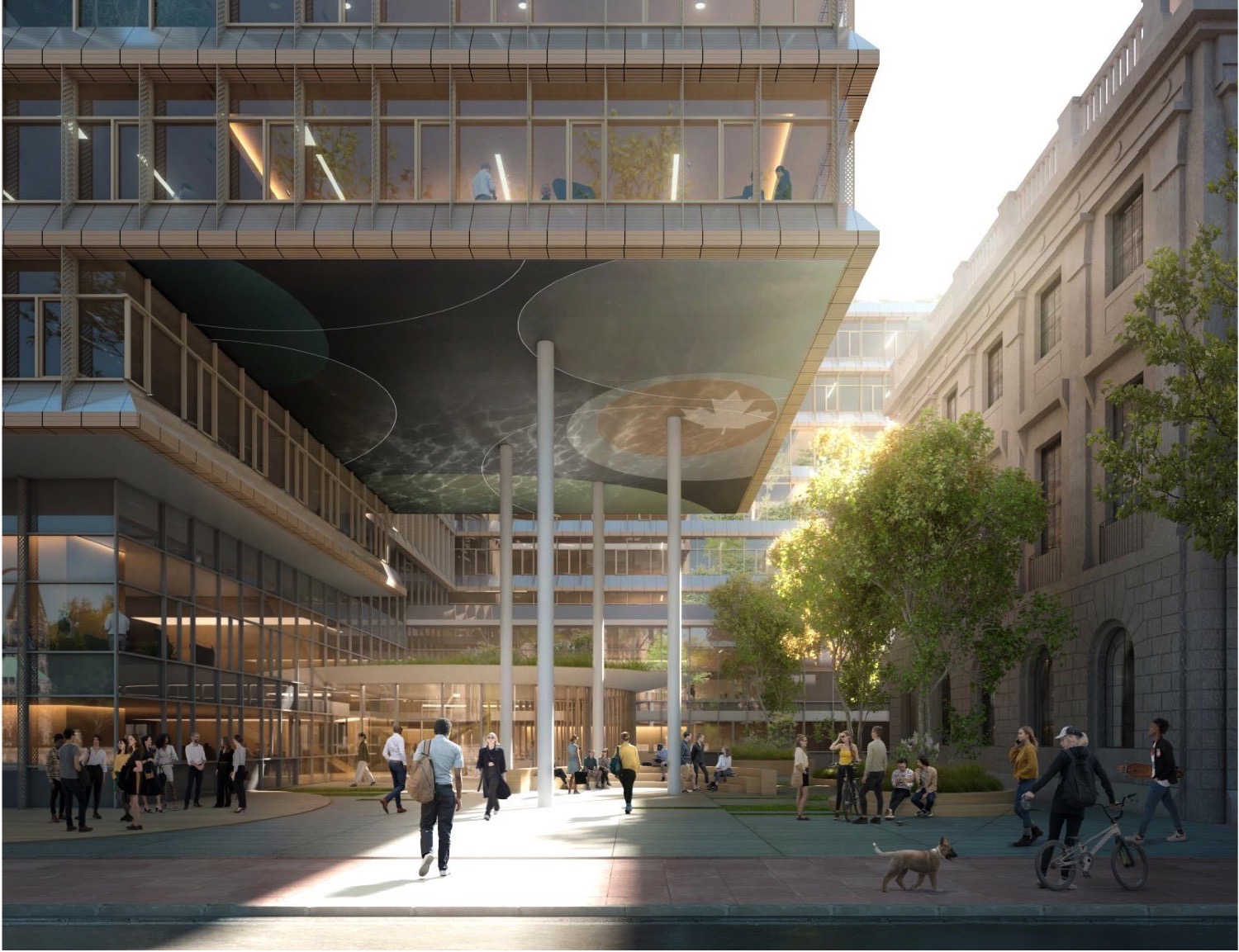 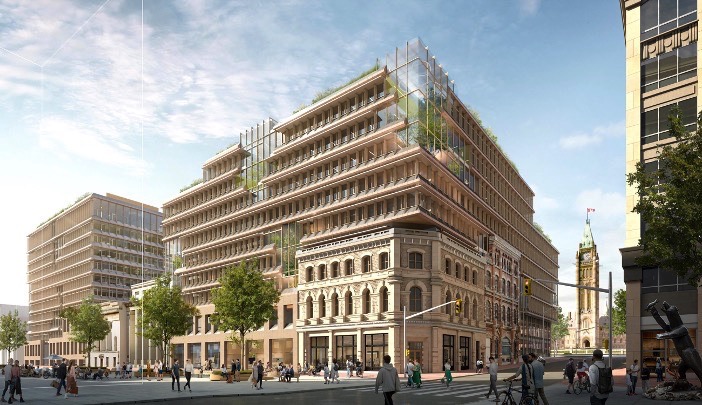 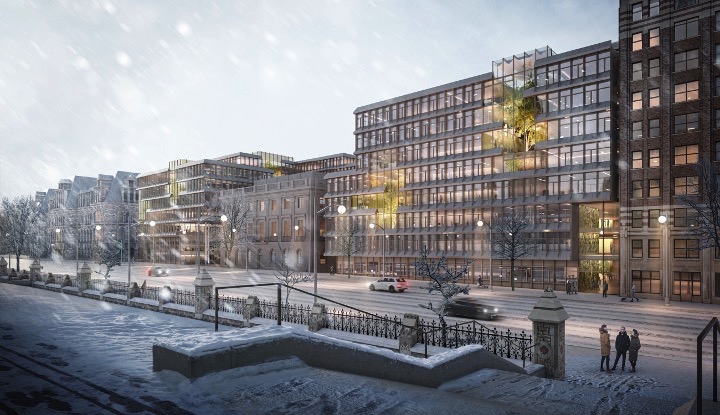 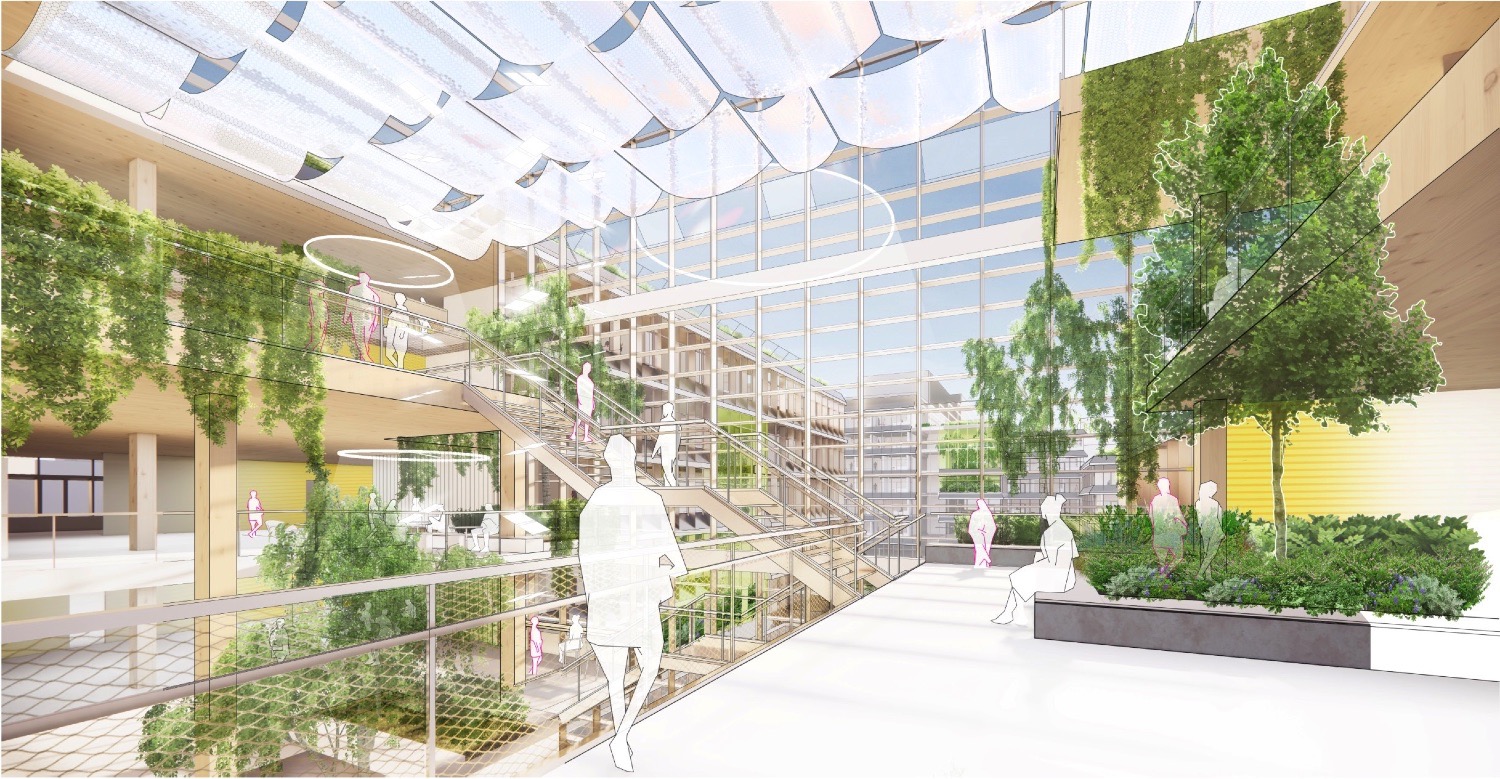 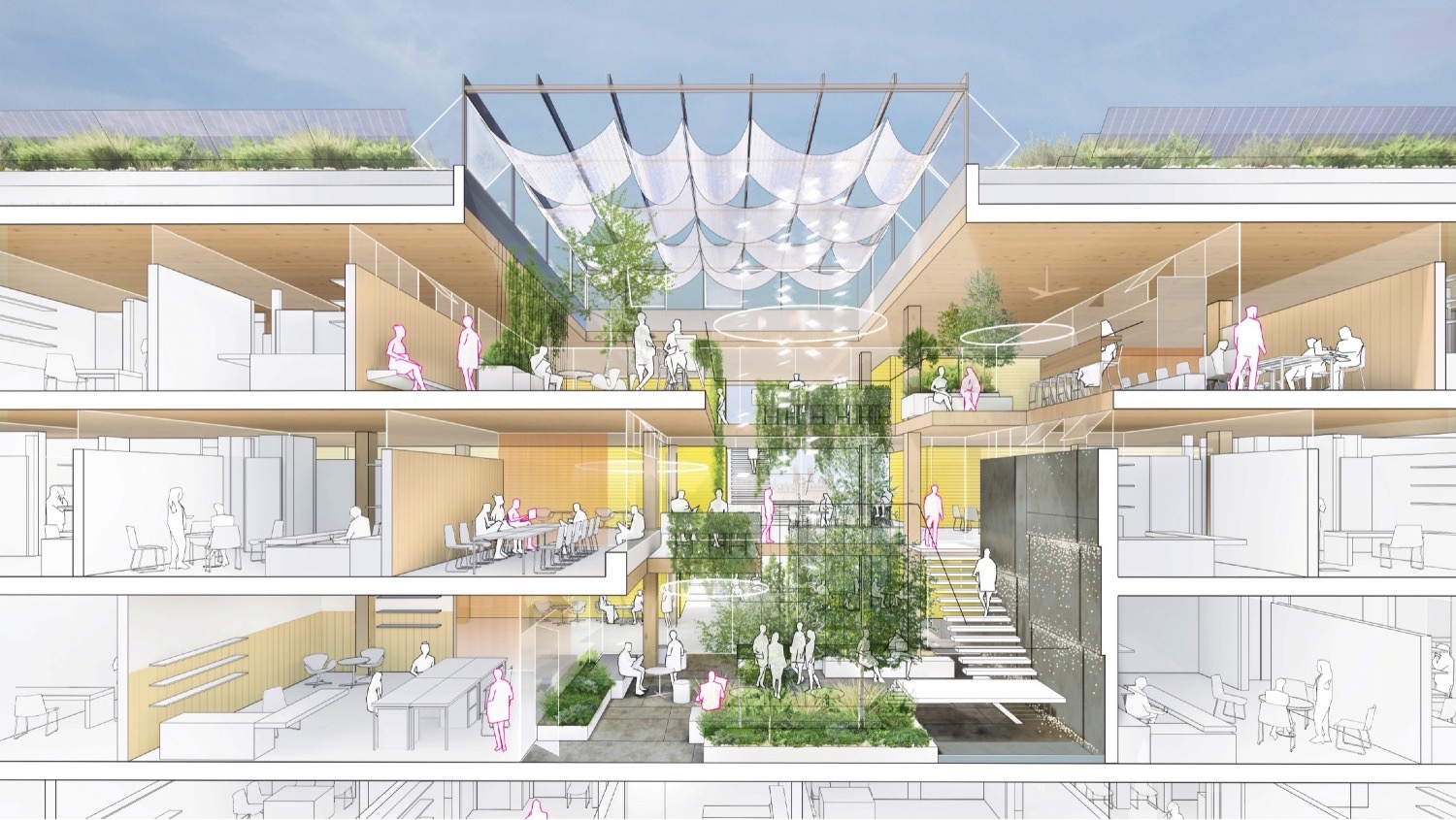 This concept proposes the re-instatement of a tightly defined street frontage repairing the urban fabric. The design presents a new identity embracing all the peoples of Canada through a series of buildings which do not employ the architectural motifs of empire. This new identity reflects the broad diversity of modern day Canadians based on mutual respect, and a shared connection with nature, the seasons, Canada’s distinct regions and its unique landscapes. The scalloped profile creates a crenulated, dynamic silhouette which echoes the ‘spiky’, punctured rooflines of the surrounding Parliament buildings. 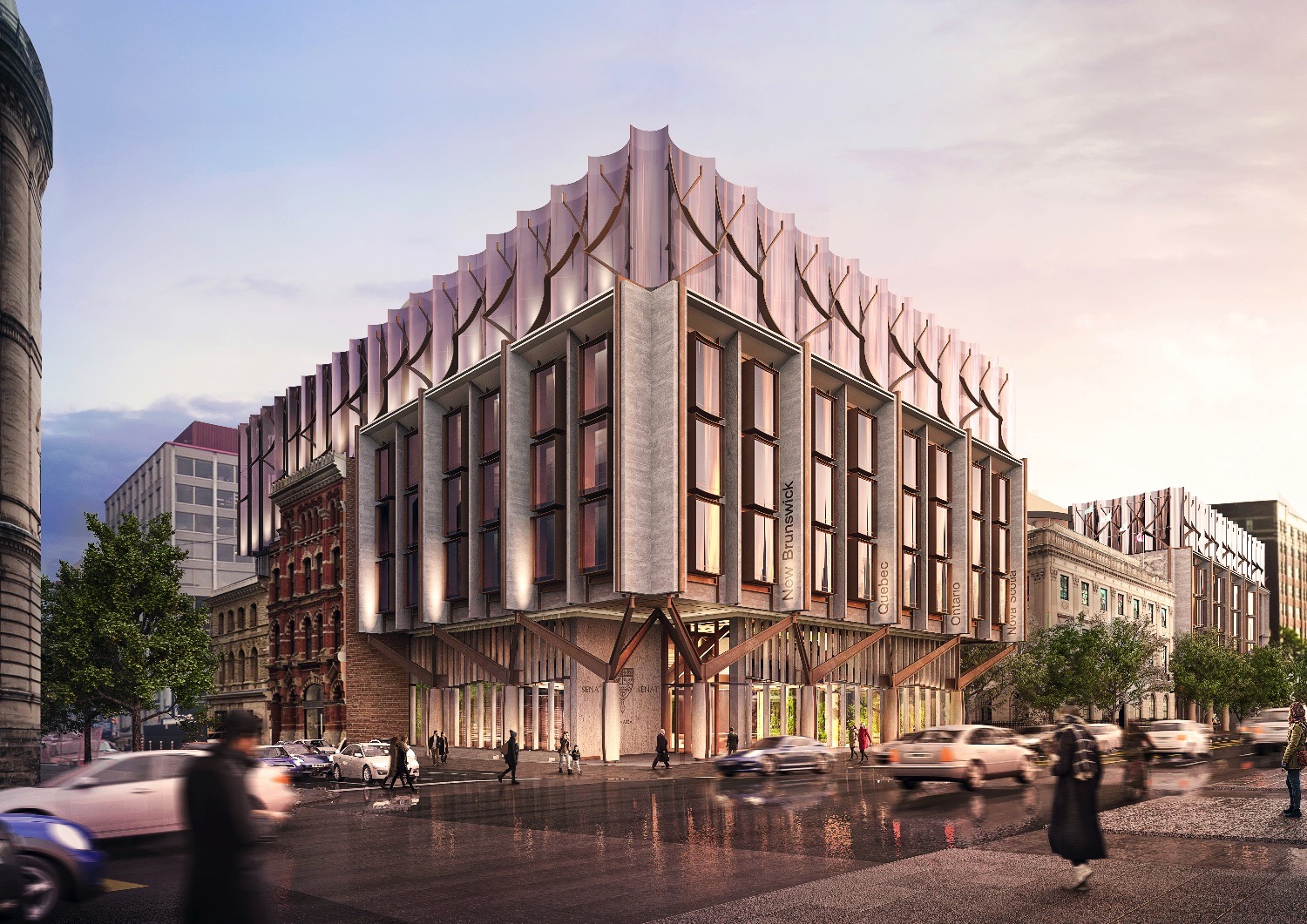 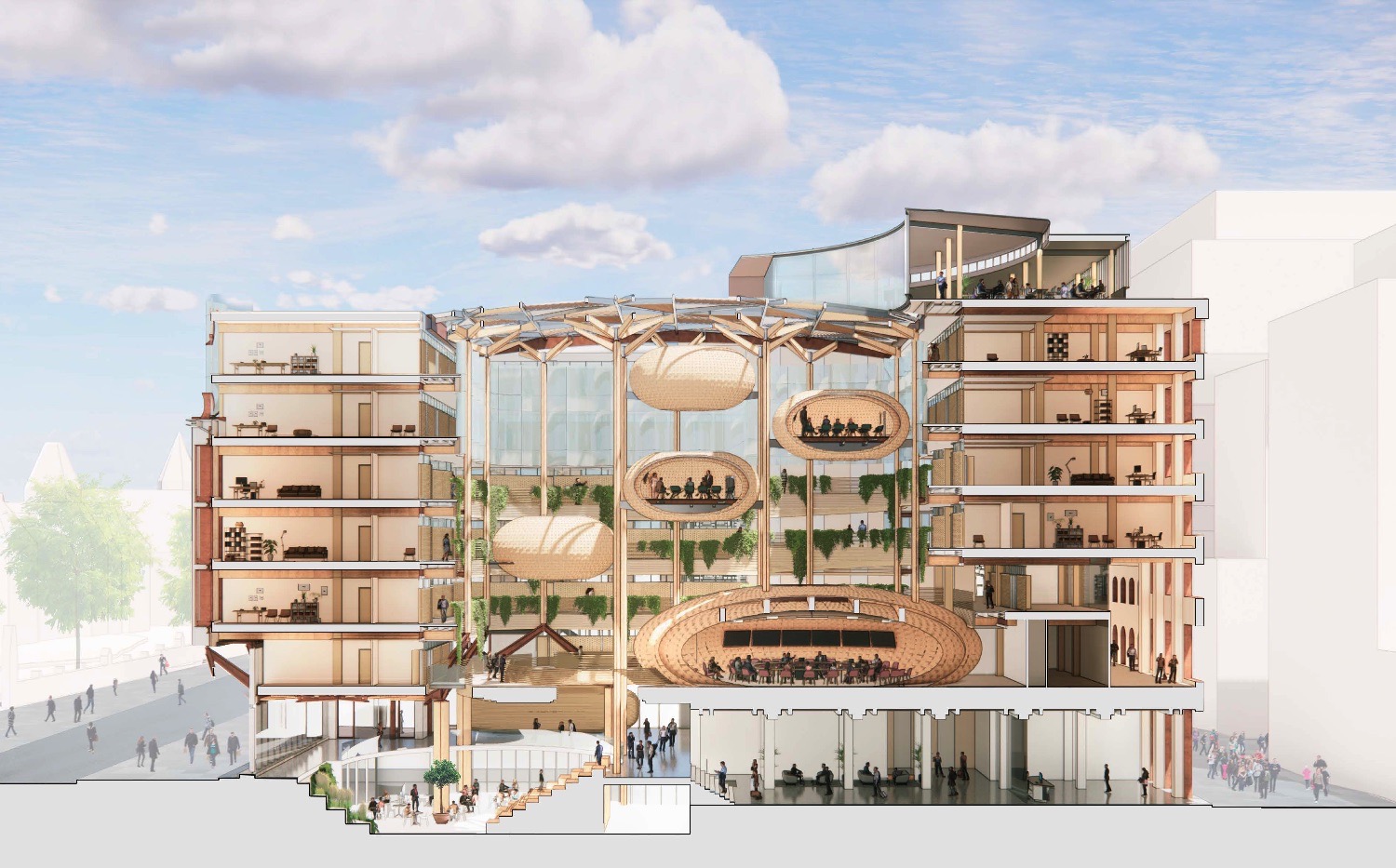 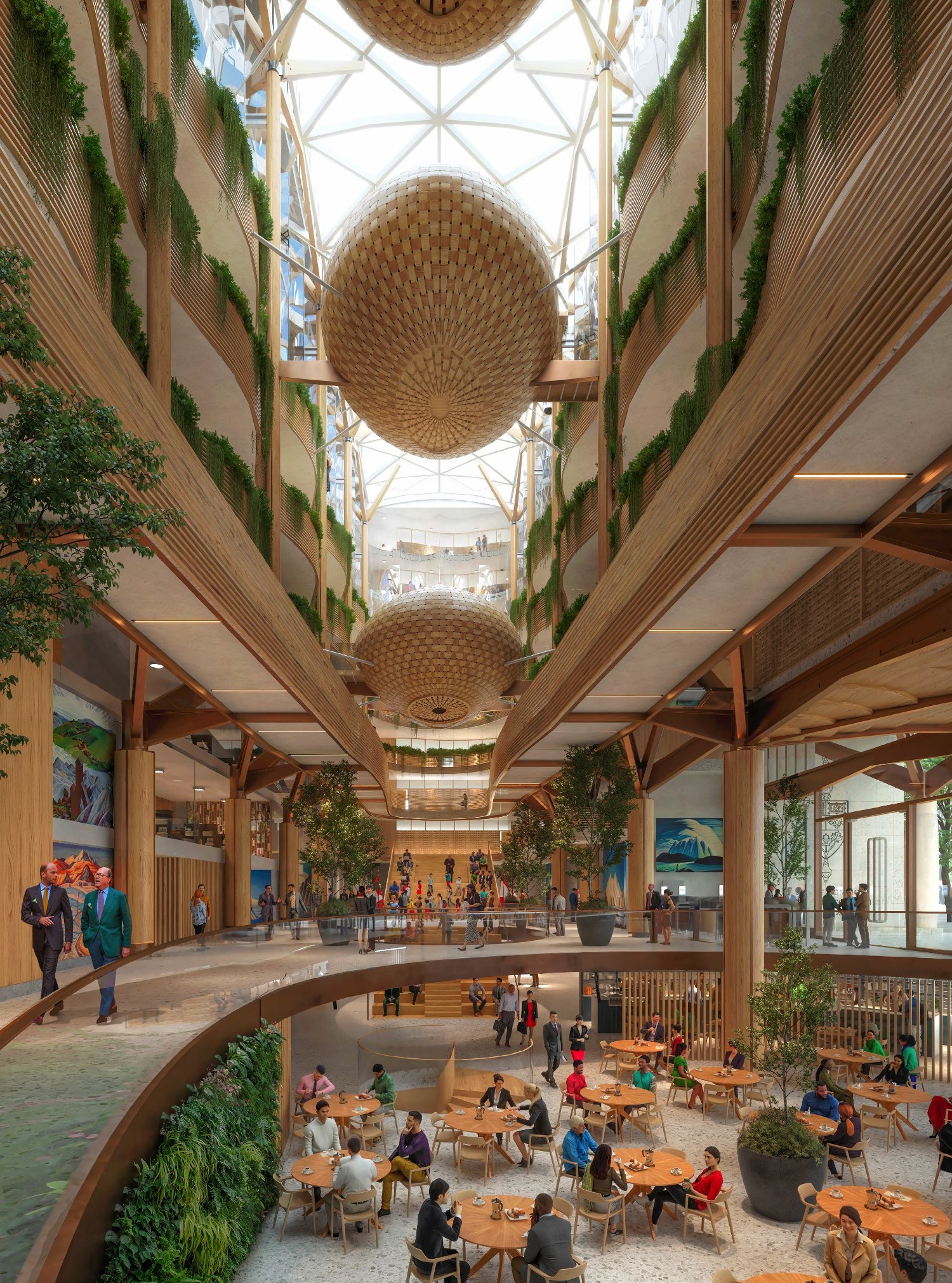 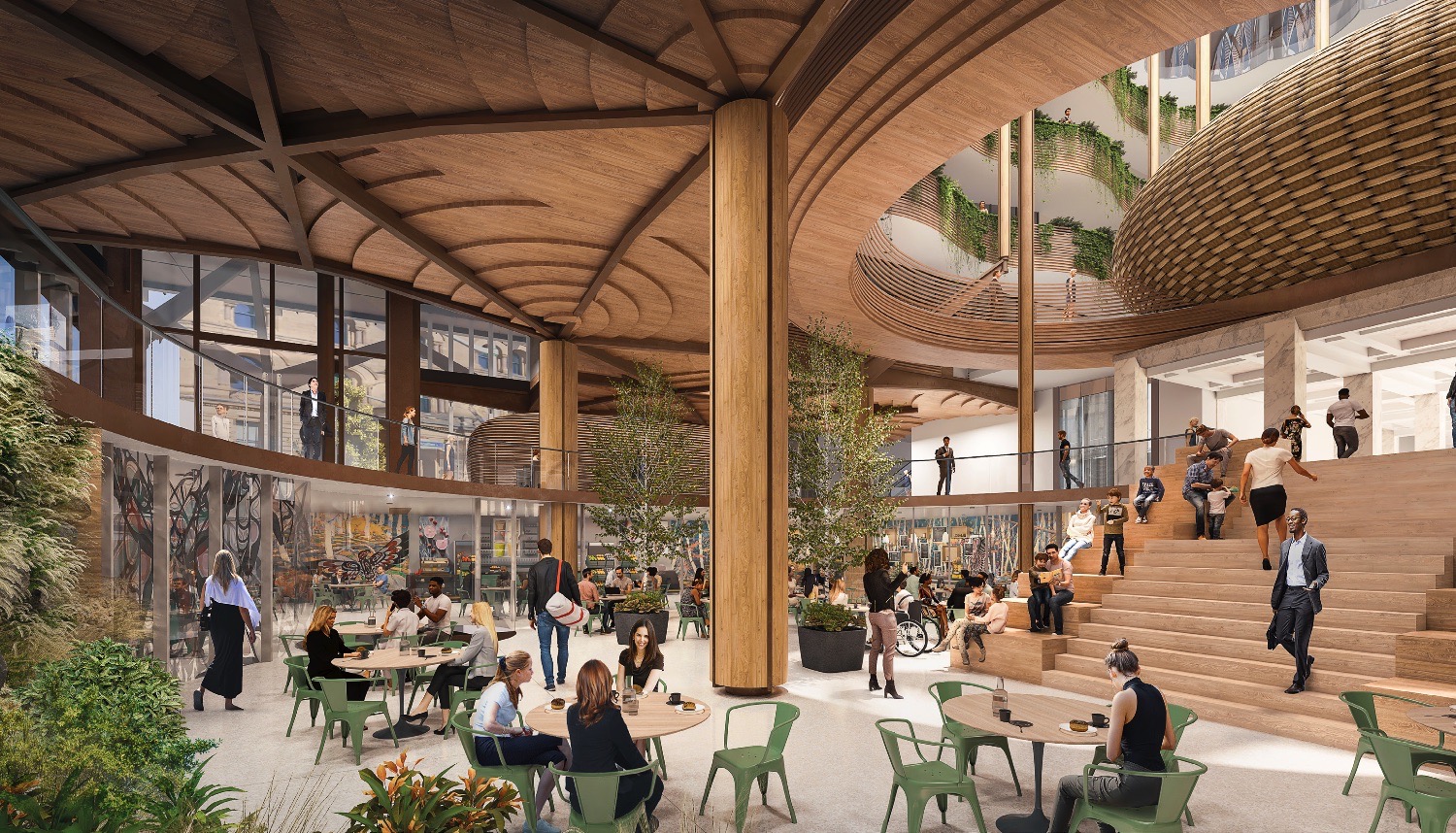 The Indigenous People’s Space (IPS) is the organizing element of the site; its architectural position is retained and strengthened. The driving consideration for this design’s north elevation is ensuring the primacy and dignity of the future IPS. A second issue facing Canada (and indeed, the world) is the climatic emergency and the need to achieve carbon neutrality. This point is manifested visibly and functionally in several ways: The southern volumes of the design are topped in photovoltaic panels, enabling the production of enough energy to cover 15% of the building’s energy requirements. On the north side, the volumes are crowned with a forest landscape as a signal, at the heart of the Parliamentary precinct, for a greener path forward and a reminder of the pre-development wilderness of the site. 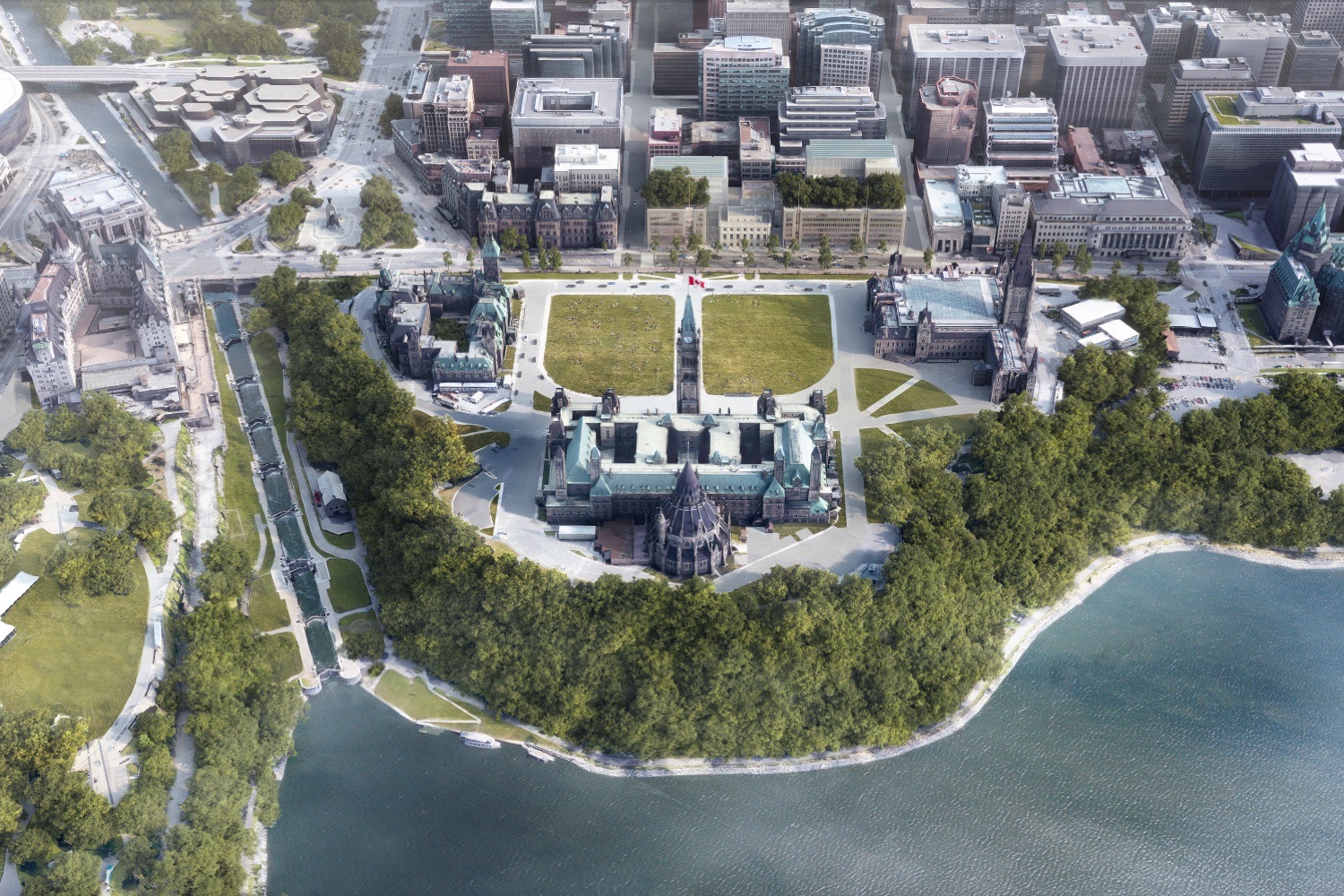 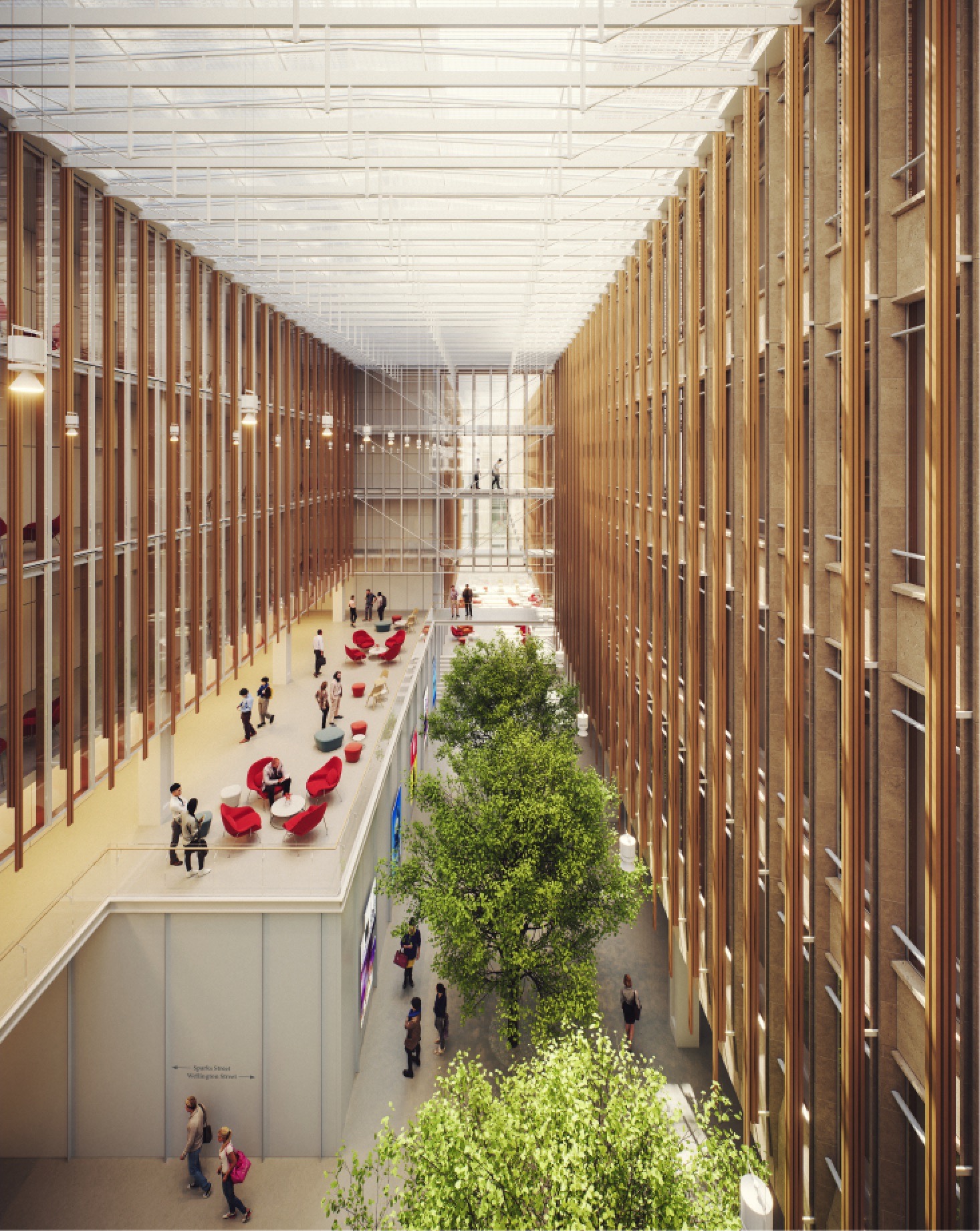 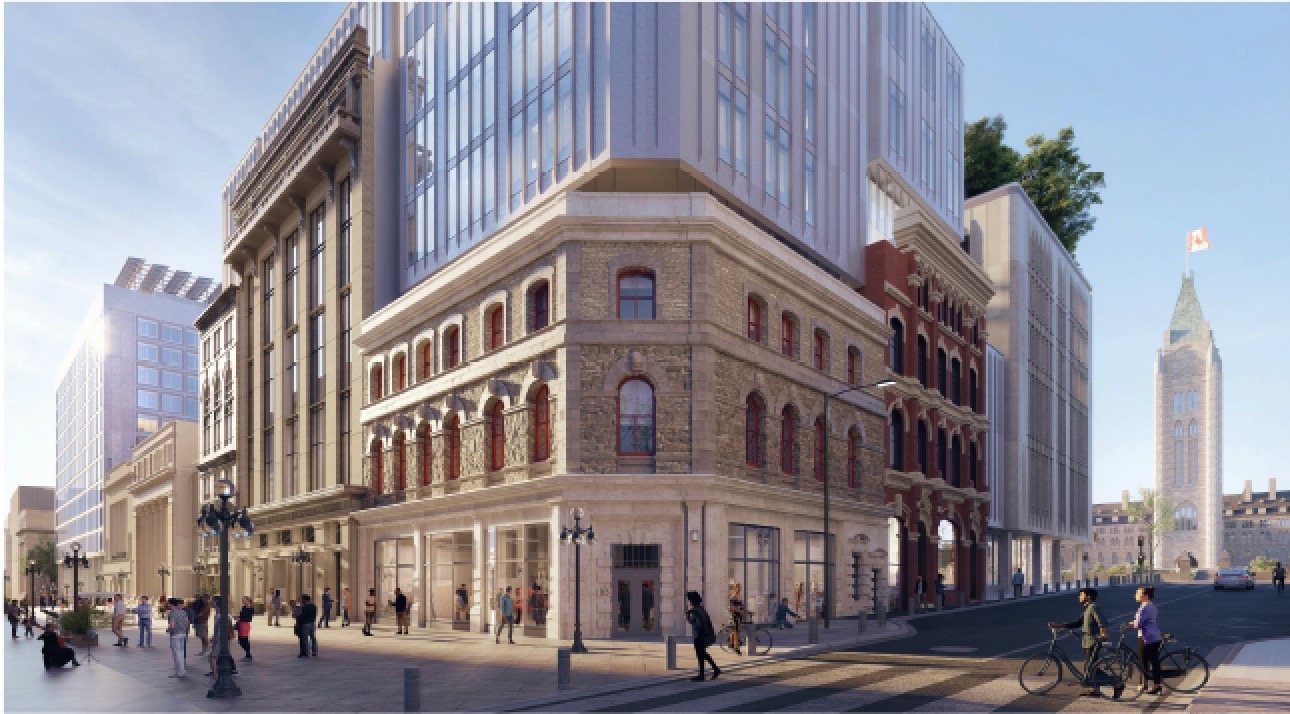 “What is at stake here is not a building on Wellington,” says Honorary Jury Chair John Ralston Saul. “It is the completion of Parliament Square, after 155 years of Confederation, in the context of a far broader understanding of the nature of Canada. It is not a government building or a civil service building. It must be a contemporary expression of the people’s parliament. There can be no fifth side. So these four buildings of Parliament Square will be the completed architectural expression of our democracy,”

“The first three buildings were a remarkable statement of self-confidence by a jumble of half-independent colonies coming together as a nation-state. It was a bigger and more dramatic statement than from any other emerging colony from any empire. Or for that matter, more dramatic than the democratic architecture being expressed in most European nation-states. And now, all these years later, we are about to make another architectural statement about our democracy and our country,” says Saul.

The video of the finalist presentations will be available on PWGCS’s YouTube channel.

Feedback on the six design schemes is welcomed through e-mail until April 19 at  [email protected].

The winning project will be selected by a competition jury at the end of April.

To learn more about the Block 2 design competition, visit: https://www.tpsgc-pwgsc.gc.ca/…/conception-design-eng.html

The full finalist video presentations are available to view here.