WINNER OF A 2022 CANADIAN ARCHITECT AWARD OF EXCELLENCE

“Very good architecture gives more than expected in bringing a solution to a challenge. In this project, the architectural solution takes the envelope of a sewer heat exchange system to a new level. It acts as programmed, enclosing the system, but it also delivers a beautiful and elegant object that improves the public realm and draws the pedestrian into a learning experience.” – Louis Lemay, juror

At the corner of Princess Elizabeth Avenue NW and 109th Street NW in Edmonton, sewage is about to intersect with sculptural form. The Blatchford Redevelopment, which aims to transform decommissioned airport lands into Canada’s first carbon neutral community, will rely on several renewable energy centres to provide more than 90% of the energy for heating, cooling, and domestic hot water to up to 30,000 residents. One part of this District Energy Sharing System (DESS), the Blatchford Sewer Heat Exchange (SHX) commands attention visually and functionally. It will extract thermal energy from the 2,400-mm combined sewer trunk located on the site. The facility’s Sharc 880 packaged units for solids removal and heat exchange, in combination with several heat pumps, will provide an average February heating capacity of 6,600 kW and an average August cooling capacity of 6,600 kW. 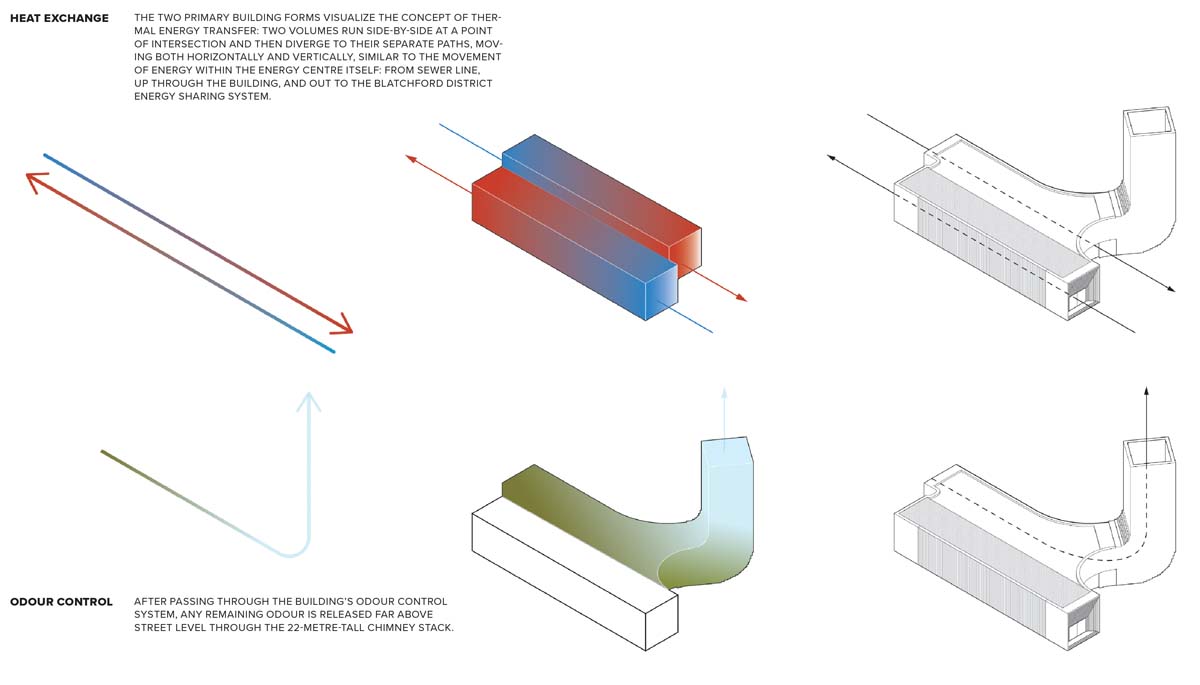 Typically, sewage processing facilities are buried or concealed in tucked-away, utilitarian buildings. The Blatchford SHX, however, will be a community icon. Like an elegantly stylized elephant trunk, its odour-dissipating chimney rises up out of park-like public realm space. The building’s striking form and the views it opens up to its inner functions celebrate urban infrastructure’s civic potential, while highlighting the impact of human daily living on the urban environment.

The above-ground form of adjacent, offset parallel bars, with one angling off and curving up to form the chimney, expresses the concept of thermal energy heat transfer: the two volumes run side by side at a point of intersection and then go their separate ways, moving both horizontally and vertically. This is similar to the movement of energy within the Blatchford SHX itself, rising from the sewer line up through the building and then out into the DESS. 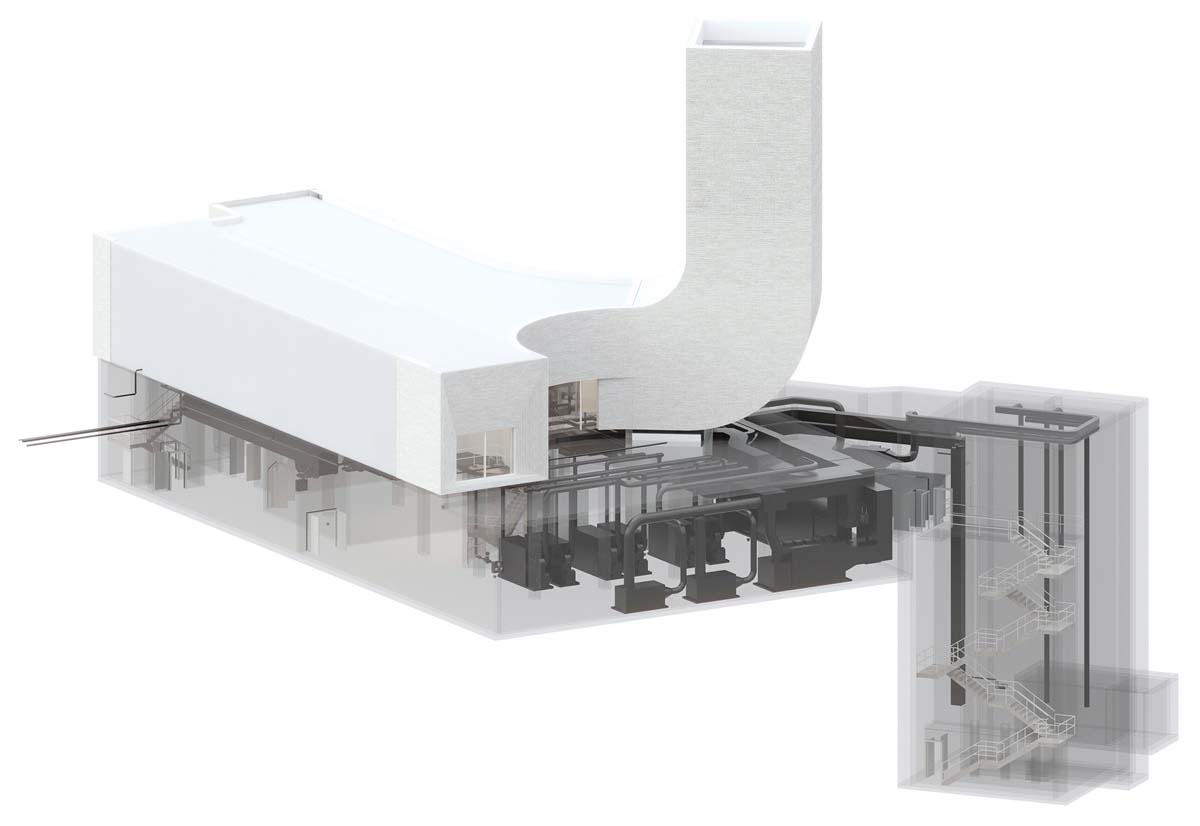 Below ground, sewage is extracted from the sewage line and passes through grinding and filtering processes as it is pumped up and into the SHX basement. Screened wastewater then passes through heat exchangers that transfer thermal energy between the wastewater and the DESS. The same heat exchangers can provide both heating and cooling.
After additional processes, the warmed or cooled wastewater is returned to the sewer main. The odour control mechanisms include a bi-polar ionizer installed in the air handling unit and the expelling of exhaust air through an activated carbon system. Any remaining odour is released well above street level, through the 22-metre-tall chimney stack. 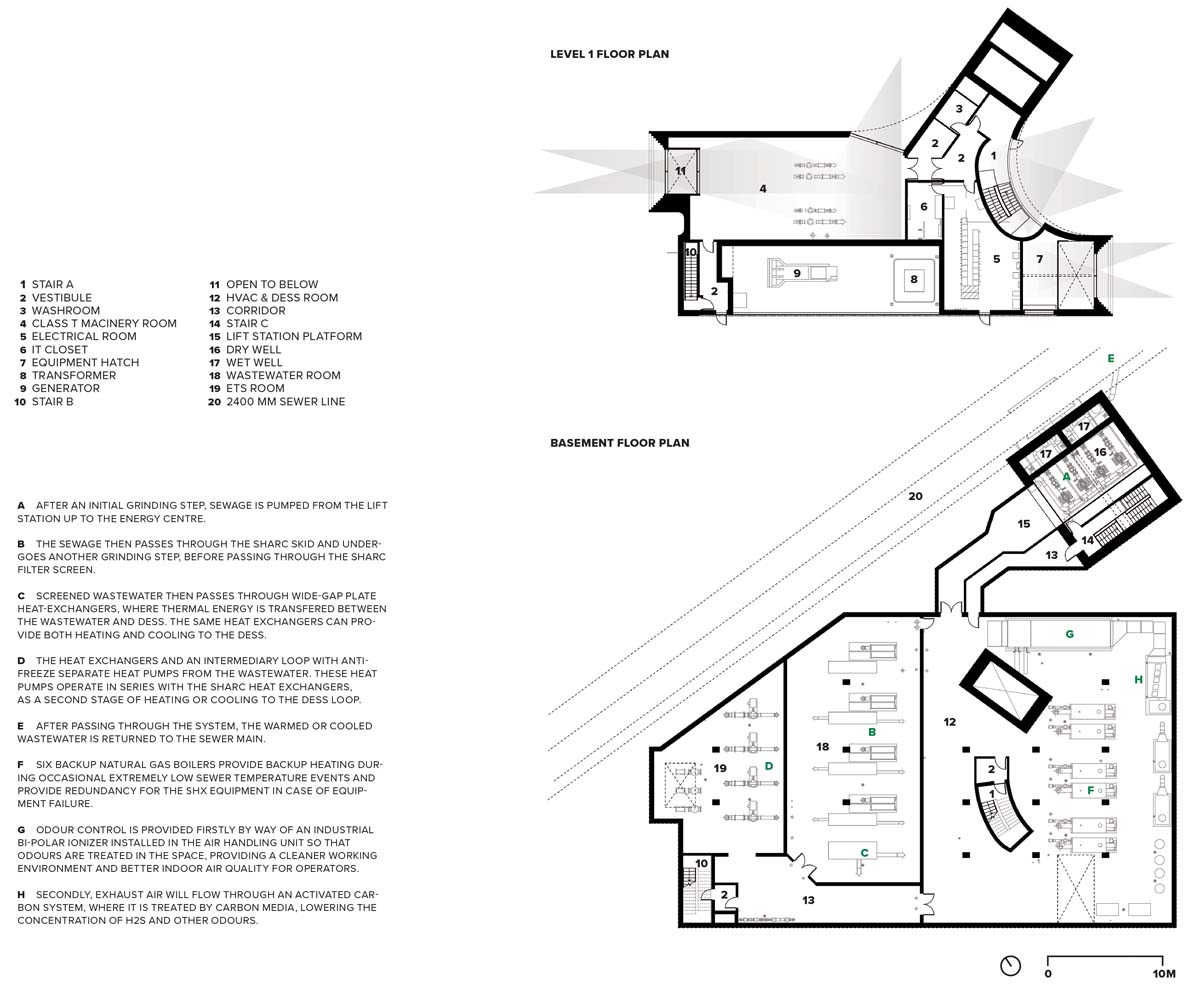 The Blatchford SHX is clad in thin white brick with a dark grout—materials chosen for streamlining and horizontal emphasis. The masonry is manipulated to frame views into a subterranean machinery hall and other parts of the building: the northwest end of one bar of the building and the southeast end of the other terminate in large, deep corbelled soffits that that draw the eye inward. On the chimney, offsets in alternating rows of brick create a gradient textured effect; the increased degree of offset as the chimney rises subtly conveys dematerialization, which is entirely fitting for its function.