Canadian artists Daniel Young and Christian Giroux have long focused on both the architecture of the banal, and the banality of architecture. They’ve produced sculpture from IKEA flatpacks, HVAC components and department store racks, referencing ironically and a little sadly the utopianism and the commercialism of modernist architecture, from Bucky Fuller’s geodesic domes to office-building curtainwall. Like arte povera and Marcel Duchamps’s “readymades” before them, their work targets the privileging of visual perception and the alienation created by modern production systems. Practising architects are only too aware of our involuntary complicity as we engage in mastering those standardized codes and regulations, while struggling to create places with value and meaning for human life. The risk is that the spaces we produce become little more than images that mask an impoverished reality. 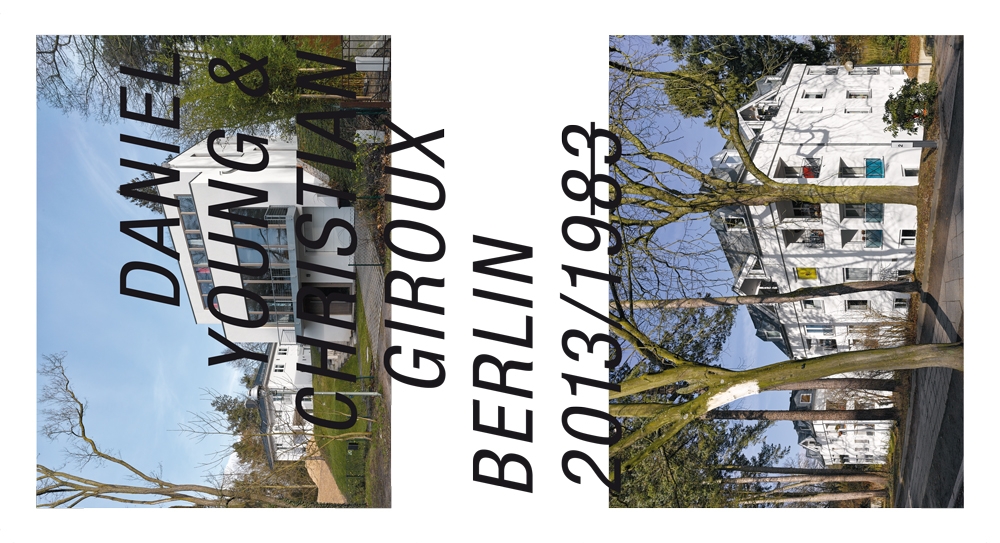 Young and Giroux have documented that entanglement with technocratic reality in video-based works like Every Building, or Site, that a Building Permit Has Been Issued for a New Building in Toronto in 2006, and Infrastructure Canada (2012). Now they have turned their eyes to Berlin. The product of a recent arts residency, the original goal was to document structures built in 2013 along with nearby buildings from three decades earlier. Planning and permit regimes, along with strict privacy laws and poor municipal record-keeping, offered distinct challenges for the artists. To track down the East Berlin construction projects, for example, they had to compare aerial photography from different years. The resulting uncertainty is the reason for the digital strike-through of the titular 1983.

In gallery installations, buildings from different decades appear in side-by-side film loops. In the book, the buildings are presented in adjacent pages: a 2013 building beside a nearby structure from, well, 1983.

The artists anticipated a marked difference between 2013 and 1983: besides three decades of design evolution, there was the 1989 fall of the Iron Curtain and German reunification. But rarely do the images make a clear distinction between eras. The accompanying essays unpack some of the reasons. For one, Berlin’s landscape-preservation regulations discourage tabula rasa construction, and so most new buildings are set in visibly older landscapes, blurring the line between past and present. But the artists consciously contributed to this absence of distinction. All the images were taken in the span of a few months by Young, Giroux and two others, from roughly the same across-the-road vantage point, projecting not just similarity but also alienation. In this depiction of a grey, undifferentiated urban tissue, the project challenges our assumptions about urban form and its ability to mark distinctions. If the passage of time and the shift from one regime to its ideological opposite is barely inscribed on the city, what does that say about architecture’s ability to respond to the evolution of ideas, technique, social change, even cataclysmic events?

Young and Giroux often target the privileging of image through image itself. The short moving image or stop-motion photographic image—amounting to barely more than a moving postcard—are tropes dating to the early history of film. They have re-emerged today (as GIF-based memes, for example), and they do so in this work. Installed in a gallery, such images can challenge and play with our experience of space through duration, but even the form of the book manages to do so. It is something like a dysfunctioning flip-book that refuses to turn the recurring images into a smooth transformation flow. Sequential images, but from a comic book that has been dismembered, recomposed, and emptied of characters.

The artists’ strategy of harvesting images is also interesting. Their system of survey completely ignores the conventional structure of the city. The four photographers worked from the northwest to southeast corners of the city in a sequence of tracking lines: left-to-right, down, right-to-left, down, repeat that ensures complete coverage of the land. The critic Kenneth Hayes draws an analogy between their path and boustrophedonic texts—that is, early forms of script which move back and forth across the page, like an ox ploughing the land. The motion of the plough was fundamental to the earliest human settlements, attested famously in Joseph Rykwert’s writing on the foundation of Rome. But the artists’ back-and-forth trajectory also evokes the actions of more contemporary tools: the motion of the head of a dot-matrix printer, the tracking of a cursor, a progressive scan or the rolling shutter of a digital camera. The scan of Berlin’s urban form by Young and Giroux harnesses a timeless, and timely, visual machine that prompts us to reconsider whether contemporary architecture matters to the city.

In no other city has the production of the image been more important than in Berlin. From the infrastructure of the Wall itself, to the arts both official and informal—IBAs (Internationale Bauaustellung) to graffiti (which reacted to it), to the post-unification pile-up of monuments, governmental compounds and corporate flagships with their goal of a new global and national order, the city and its image is tasked with first separating and then integrating two worlds. Recent opposition to Google’s proposed new Kreutzberg campus reminds us that Berliners are skeptical of agendas at the confluence of urban space and media. But these are projects in which architecture has invested heavily and played a key role. Young and Giroux are provocative, even merciless, in undermining that role. If our art means something in this context, in their eyes it signifies something much different from what we usually want to imagine.

Lawrence Bird, MRAIC is a visual artist, planner and architect at pico ARCHITECTURE in Winnipeg.