Toronto lies in ruins, reclaimed by the inexorable forces of nature. Nathan Phillips Square is flooded, Viljo Revell’s curved concrete walls are crumbling. Shanties occupy the surrounding roofs, sheltered by circular tarps; rigging and pulleys cantilever off the sides of skyscrapers. To the south, where the Sheraton Centre’s courtyard atrium once stood, a young forest is taking root. 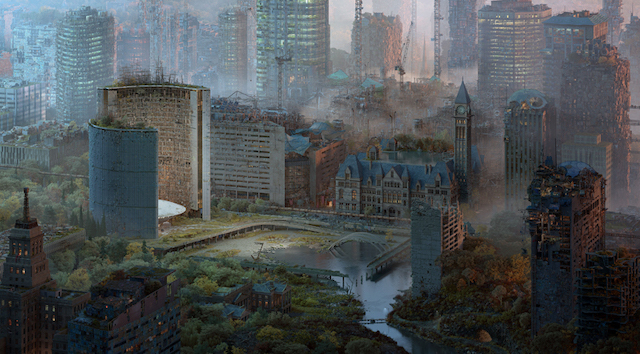 It’s a scene from the dystopian virtual reality experience Biidaaban: First Light, which is travelling across the country and made its Canadian debut in Toronto last fall. In September, viewing stations for the short film were set up in Nathan Phillips Square. When I donned the Oculus Rift goggles and turned towards the real-life City Hall, I saw Biidaaban’s futuristic version in its place: a nighttime scene, where a young First Nations girl tended a campfire, set on the decaying paving at the foot of the curved towers.

It’s a strangely compelling vision: a city with few inhabitants and many trees, filled with the sound of crickets rather than sirens. At night, you see the stars rather than the city lights. There’s a feeling of stillness, of peacefulness. In a sense, it takes to a logical extreme the romantic notions of recent plant-centred architecture. Tree-covered skyscrapers are popping up in Sydney, Milan, and even Toronto. New York City’s Highline reimagines a disused railway as a garden. Urban farms are being planted on vacant lots in Detroit’s distressed residential neighbourhoods. What if entire cities were given back to nature?

Anishnaabe director Lisa Jackson teamed with 3D artist Mathew Borrett to create the piece, which was crafted using to-scale digital models of downtown Toronto. Indigenous languages are at the heart of much of Jackson’s recent work, and the audio score of Biidaaban is centred on First Nations voices speaking in their native tongues. Transcripts of their poems and prayers appear across the images, with words in Wendat, Anishinaabemowin (Ojibway) and Kanyen’keha (Mohawk), as well as in English translation.

“Indigenous North American languages are radically different from European languages and embody sets of relationships to the land, to each other, and to time itself,” Jackson told Filmmaker Magazine. “I understand why elders always say, ‘Our culture is in our language.’”

Case in point: the title of the piece. Biidaaban is an Anishinaabe word that refers to the moment of first light before dawn—and the notion of the past and the future collapsing in on the present. Jackson resists her work being labelled “post-apocalyptic” in part because Indigenous concepts of time are circular, rather than linear. “If you take a different perspective,” says Jackson, “the apocalypse has already happened.”

How can we design for greater community resiliency?