With its idyllic setting facing the Saint John River opposite the Provincial Legislature, the Beaverbrook Art Gallery has been a distinguished presence in Fredericton from the moment its doors opened in 1959. The building’s clean, symmetrical form and simple lines presented a midcentury masterpiece in a city better known for Loyalist and Victorian structures. 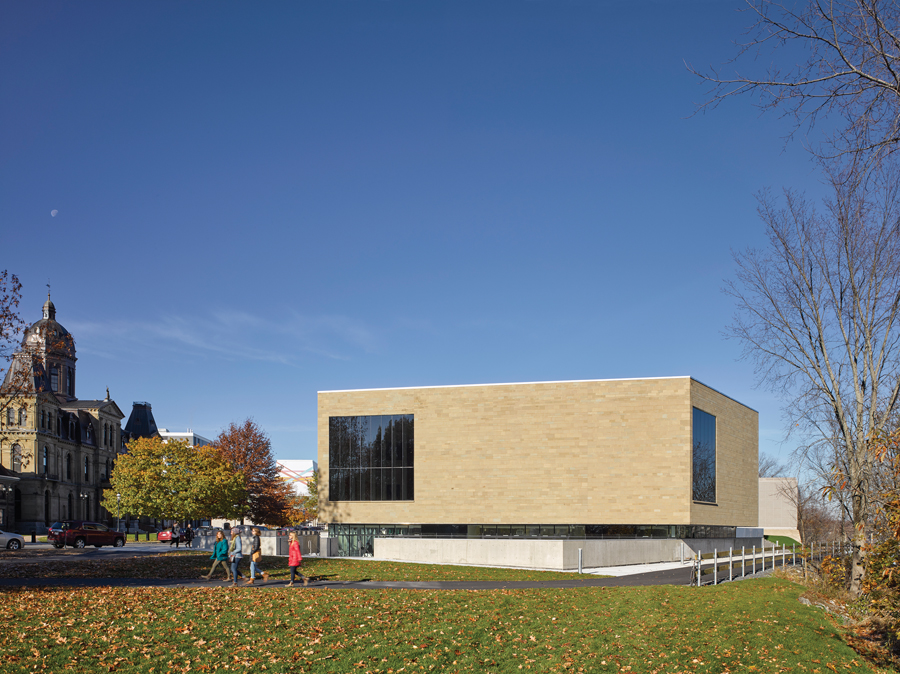 Since that inauguration, the gallery has episodically transformed itself by responding to expanding audiences, growing collections, and benefactors. Three additions between 1983 and 2010 have more than doubled the area of the original public spaces. But its newly completed expansion is its boldest and most ambitious transformation yet. As a longtime resident of Fredericton and an adjunct curator at the Beaverbrook since 2008, I have seen many of these changes first hand, and I have long admired how such an institution can contribute to the city through its architecture. That said, the gallery has over most of its life presented a somewhat formal and opaque presence, which has hampered its connection to pedestrians and to the waterfront—until now.

Led by Halifax-based Mackay-Lyons Sweetapple Architects, the expansion propelled the institution into the 21st century. New features include lofty new galleries, a bright café, visiting-artist studio, learning centre and lecture hall, additional art storage space, outdoor sculpture court, improved wheelchair access and other accessibility improvements. But most significantly, its new three-storey, 14,000-sq.-ft. pavilion has created a new openness and visual connectivity between the inside and outside. The result is distinctively contemporary yet sensitive expansion of Lord Beaverbrook’s original building design. 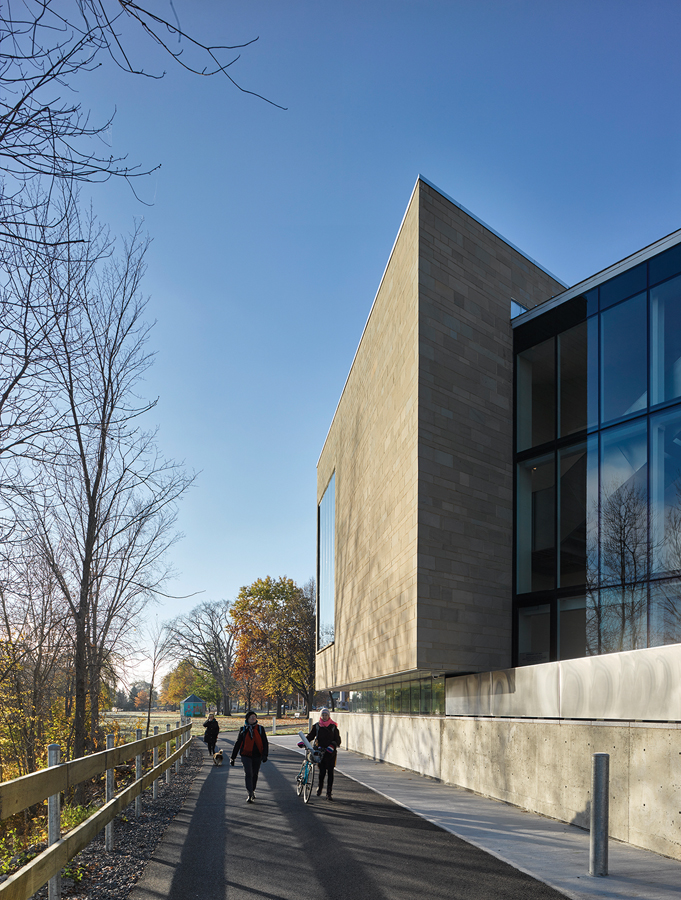 Talbot Sweetapple, the partner-in-charge of the project, respected the art gallery’s unique siting at the converging point of the river, the riverside park, and the city centre. “The expansion is an opportunity to connect to these landmarks, realizing the Gallery’s full potential through a stronger relationship to the urban context and the public,” says  Sweetapple. He felt that to truly engage the public, “the Beaverbrook Art Gallery must extend outwards beyond its walls into the open air and the civic realm.” The way to do this, he calculated, was to first create strategic views from the gallery interior to the outside, and vice versa; and then to create vibrant new outdoor spaces.

A sweeping new sandstone-clad loggia-like pavilion wraps around the east end, opening to the Saint John River and Fredericton’s cherished riverside park, known as the Green. Two giant picture windows open from the main floor galleries to the exterior landscape, sharing art with the city and enticing passers-by with discreet views of the art within. And visitors inside the gallery now can behold the panoramic landscape vistas through which Fredericton has defined itself.

It is said that while Lord Beaverbrook loved the art that hung on the gallery walls, his favourite painting was the great north-facing window that offered a broad vista of the River and the landscape beyond. The window was filled in decades ago during a later addition, but it originally constituted the rear facade of the central High Gallery, right next to Salvador Dali’s enormous painting Santiago el Grande. MLSA’s huge new windows and continuous ribbon of glass at the ground level are bold and effective gestures that rekindle that rapport. These large expanses of glass feature protective coatings, ceramic fritting and louvres, shielding the artworks from sunlight while maximizing views to the outside. 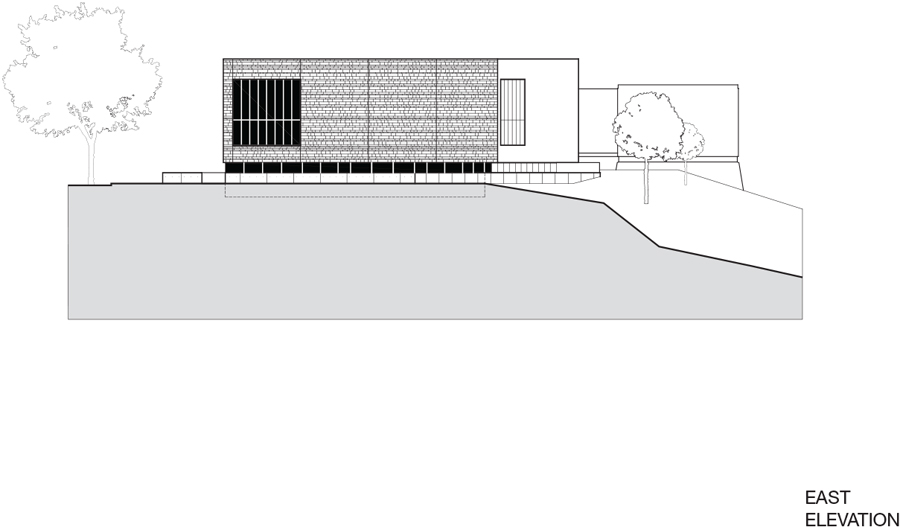 The two levels of the addition provide much-needed public amenities and versatile contemporary galleries for the Beaverbrook’s permanent collection as well as touring exhibitions. Floor-to-ceiling glass on the lower level brings in natural light and establishes its public presence through the sunken sculpture garden and a secondary entrance. The café and learning centre face the street and the Green, and their activities will spill out onto the sculpture garden terrace during the warmer months.

The marquee spaces of the sweeping east wing are the three large galleries that fill the main level: the Elizabeth A. Currie Gallery on the Green, the Jean Irving River Gallery and the Dali Gallery. Two smaller gallery spaces feature drawings as well as paintings by emerging artists. At the end of this procession sits the shrine-like Salvador Dali Gallery, a space carefully tailored in ceiling height and overall proportion to fit Dali’s masterpiece Santiago El Grande and the Beaverbrook’s three other Dali portraits. The renovations also included refinements to some of the original gallery spaces, such as the Harriet Irving Gallery and the Orientation Gallery, both adjacent to a refitted entry lobby.

At the lower entry level of the new wing, the hard-surface landscaped sculpture courtyard will provide an important place for public art and outdoor performances. An articulated concrete wall serves as a boundary as well as a place to sit. It also helps protect the lower level from the city’s periodic spring floods. 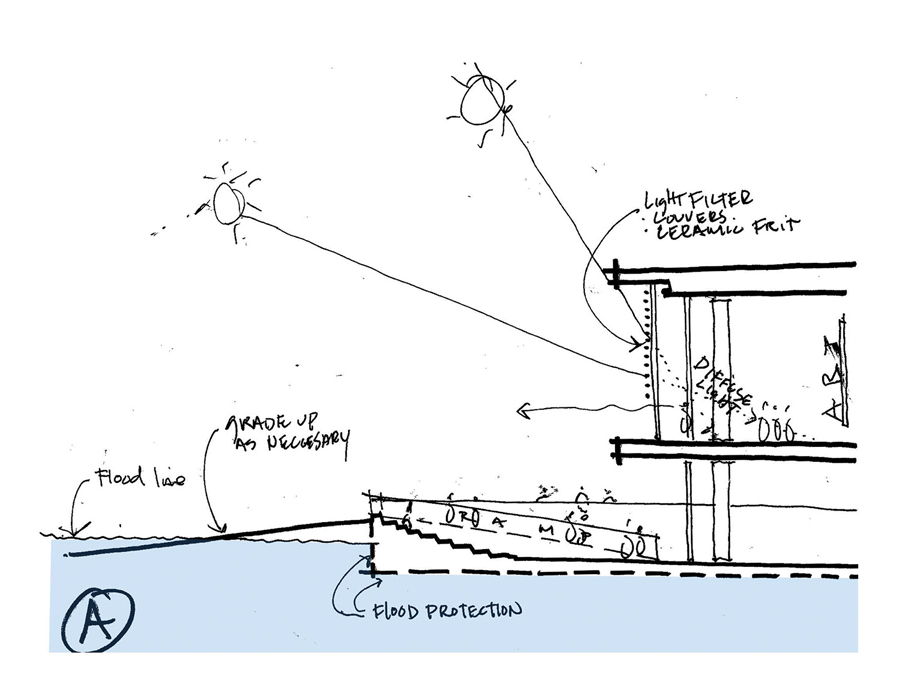 The architectural language of MLSA’s Beaverbrook addition is consistent with the firm’s rigorous approach of fusing form and function in a Maritime context. The design team has created a volume and spatial layout that is spare but refined, and this contextual respect is perfectly aligned with the spirit of the original building. Both the original gallery and the new pavilion convey a spartan sensibility, with quality materials and a textural play of light and shadow on clean walls. Beyond the formal distinctiveness, the new facility fuses architectural goals with social and cultural purpose, anticipating enhanced public programs and new audiences. It is a superb fulfillment of its role as the provincial flagship art gallery.

Housing for Women by Women in Vancouver