When the Laurentian University McEwen School of Architecture officially opened on January 19 of this year, we celebrated the long-awaited event in keeping with the season and the community. Outside, LED-illuminated wigwam structures and laser-cut geometric assemblies built by students filled the snowy courtyards, while bonfires burned throughout the evening. Inside, students, faculty, staff, and community members packed into the home of Canada’s first new school of architecture in 40 years, and as the local Black Bull Moose Singers belted out songs to the beat of their thunderous drums, it confirmed for me that this was not going to be like any other school of architecture. It couldn’t be.

When I first arrived in Sudbury in 2012 as a faculty candidate, I saw the city and region as a unique context for the study of architecture. The school would be situated not in a bustling urban centre or capital city, but a somewhat remote mid-size community known more for nickel mining and the Stompin’ Tom Connors song “Sudbury Saturday night” than for its potential as a northern design hub. And while not very “northern” by latitude, the prominence of the Canadian Shield and multiple lakes scattered throughout Sudbury’s suburban and rural population—including several First Nations communities in close proximity—lucidly evokes “the north” in terms of a lived experience.

Laurentian University’s triple mandate of embracing Anglophone, Francophone, and Indigenous cultures struck me as extraordinary in terms of framing a design curriculum. Having been raised in northern Saskatchewan and proud of my Métis heritage, I beheld the school’s northern emphasis and the opportunity to work alongside Indigenous elders and colleagues as a truly unique opportunity. Now in preparation for my upcoming term as Director, I see more clearly than ever the importance of this mandate, not only for the community and the university, but also for design education in Canada. 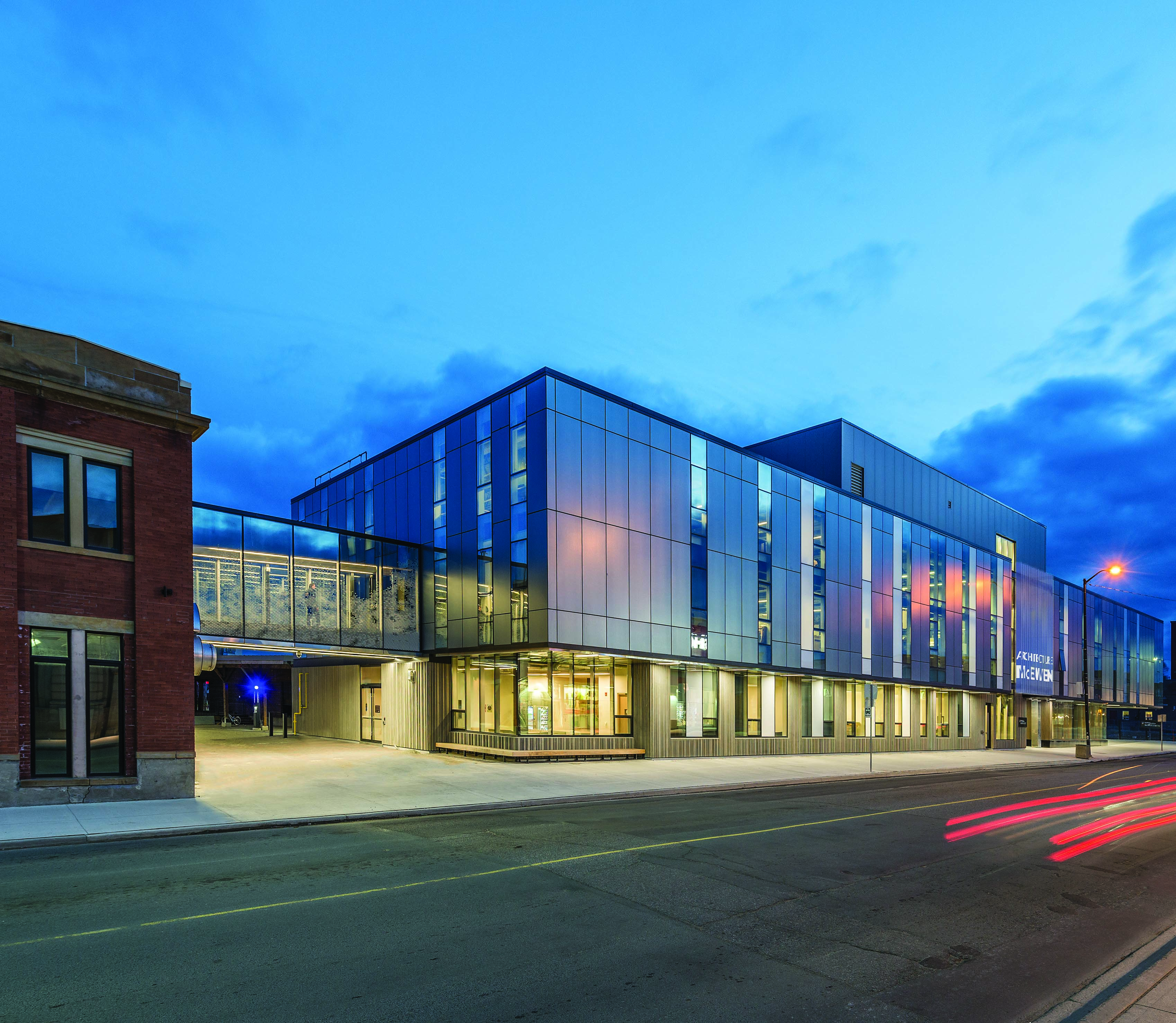 The school, which our founding director Terrance Galvin has described as Canada’s “northern Bauhaus,” opened in 2013 after a passionate community-led quest. Northern Ontario required a design school that could server as both economic revitalizer and vibrant think-tank, in the heart of downtown Sudbury. Northern-related topics such as the appropriate housing, Indigenous cultures; traditional and evolving northern lifestyles, wood construction, availability of resources, local ecologies and climate-change impact have all guided the program formation from its early community visioning exercises through the final curriculum development. It is the only school of architecture outside of Quebec to offer French-language studio courses, and the first to include offices for Indigenous Elders who play a central role in the school.

Designed by LGA Architectural Partners, the McEwen School of Architecture is thus the first Canadian architecture school of “the north.” The initial design challenge was to define what this meant, balancing the goals set forth by the community while providing a state-of-the-art facility for the 21st century. “As Canadians, we chose to celebrate the cultures co-existing in the Sudbury community—Indigenous, Anglophone and Francophone—to create a building and precinct that would simultaneously allow each cultural group to feel at home in the design or spatial aspects of the new school,” says design principal Janna Levitt. “The design is also universal, in that most places in the world are addressing the forces of climate change and grappling with how to create a compelling curriculum for a post-colonial society.”

The design team first created a small downtown campus by repurposing the site’s two existing structures, one of them a two-storey brick building (the former CPR Ticket and Telegraph Building, built in 1914), transformed into faculty offices and a boardroom in Phase One; and the other a single-storey former rail shed turned indoor market, which first became the studio before transforming in Phase Two into what is now affectionately known as the Fabrication Laboratory, or FabLab.

The site constraints, most notably the angled railway to the west, informs the overall arrangement of the buildings. While the CPR-Telegraph building holds the eastern urban edge, the new buildings embrace a courtyard protected from prevailing winds but exposed to southern sun for year-round use. In the day-to-day activities of the school, the courtyard acts as a pivot, visible from all buildings and left mostly vacant for flexibility and outdoor programming. The landscape plan includes outdoor fabrication and assembly space next to the shop, as well as a circle marked in the pavers for future ceremonial fires.

To optimize the building’s long-term performance, the design team factored in the region’s abruptly changing seasons, harnessing both passive and active systems in their approach, which aimed to transcend standard metrics. “We worked collaboratively with our project partners to develop what we named ‘The LAL Sustainability Manifesto,’ a new framework with principles specifically designed for northern buildings,” says Levitt. “The parameters focus on conservation, passive survivability, and optimal flexibility to avoid future redundancies.” South-facing elevations of both the primary studio space and the library wing embrace the sunlight while north facing walls have reduced openings. Digital screens will allow students to evaluate the building’s energy performance, and a green roof creates space for future study and analysis. Meanwhile, the raised floor throughout the CLT library wing provides a modular infrastructure that can adapt to future service requirements.

The exposure of structural, mechanical, and electrical systems facilitates the school’s didactic role: students can learn about construction methods by walking through the buildings with a sketchbook. Lessons on heritage value and building techniques are also implicit in the CPR-Telegraph Building, built of load-bearing walls with a brick exterior and punched windows. The former shed and market-turned-shop has heavy timber post-and-beam construction, with a century-old patina conveying its multiple past uses. The new studio wing is composed almost entirely of steel and concrete, while the library wing showcases CLT construction and the sustainable development of northern Ontario’s forestry industry. These spatial and material conditions allow for an appreciation of architectural qualities on a simple journey from one’s office or studio desk to the library or shop.

Smaller details further amplify the building’s didactic role. The insulated metal panel walls provide multiple scattered surfaces where drawings can be “pinned up” with magnets. The “Crit Pit,” with its wooden bleachers, can be divided by moving the storage units with pinup boards on either side, but can also function as a large-scale performance or review space. Curious pedestrians often pause here to peek into the sunken room, deepening the school‘s relationship with the community.

The design’s regional emphasis most clearly defines this project. On any winter afternoon, a wood fire crackles in the hearth of the CLT-framed atrium, whose exposed details are oddly consistent with those of a traditional log cabin. As the train rattles by, students hover around their laptops to discuss community-led projects in places like Chapleau, Powassan, Sault Ste. Marie, or Wahnapitae First Nation. In the next building, student groups are weaving together birch-bark canoes and planning ice skating huts, or working on northern saunas, both with hand tools and digital fabrication. Occasionally, Elders lead small ceremonies to offer a prayer and smudge to our students, faculty, and community members, in hopes of positive progress.

While the full identity of the McEwen School of Architecture will unfold over many decades as we expand and mature, I sense that the infrastructure for this “northern” school, both pedagogically and architecturally, has met its initial challenge. This is already a school of architecture like no other, and it’s just getting started.

David Fortin, MRAIC is Assistant Professor at the Laurentian McEwen School of Architecture and will become Director of the school in January 2018.