Bank On It: Sir John A. Macdonald Building, Ottawa, Ontario

Imagine, for a moment, that this is your first week on the job. You’re a rookie MP, fresh and eager after your October 19th election win, heading to Ottawa for the compulsory weeklong orientation session. One key meeting is booked at the newly opened Sir John A. Macdonald Building. You make your way to 144 Wellington Street, directly across from West Block, chatting with your fellow members of parliament, perhaps remark­ing on the noble façade of the former Bank of Montreal building or noticing for the first time the contemporary glass-fronted addition, situated in a former parking lot. As you and your colleagues enter the main hall, there’s an abrupt hush as everyone pauses to take in the moment—the grandeur of the gallery, sun streaming through soaring windows, lighting up the intricate tiled floor and bouncing off the exquisite suspended art-deco lights. Your heady confidence in the wake of the election takes a backseat as you survey your surroundings and draw a deep steadying breath.

Susan Kulba would have it no other way. “This building speaks to the dignity of Parliament. It speaks about tradition and Parliament and democracy—when our MPs enter it, it reminds them of their role,” says the senior director of the House of Commons’ Architecture & Long Term Vision and Plan Program Management Directorate.

Indeed, for close to a century this building has exemplified grandeur and dignity. It has also represented optimism. The Bank of Montreal launched the competition to build its headquarters in 1929, just as the Great Depression commenced, using the three-year construction project to provide jobs for hundreds of workers and signal its confidence in the Canadian economy. In 2012, the renovation of the dilapidated former bank and the building of the adjacent Annex took the same amount of time as that initial construction project. It was similarly bold, with the federal government freeing up $99.5 million to finance the monumental task of creating a state-of-the-art replacement for the West Block’s former Confederation Room, designed to host significant parliamentary events—think state dinners, galas, large diplomatic receptions, and the occasional federal-provincial conference. 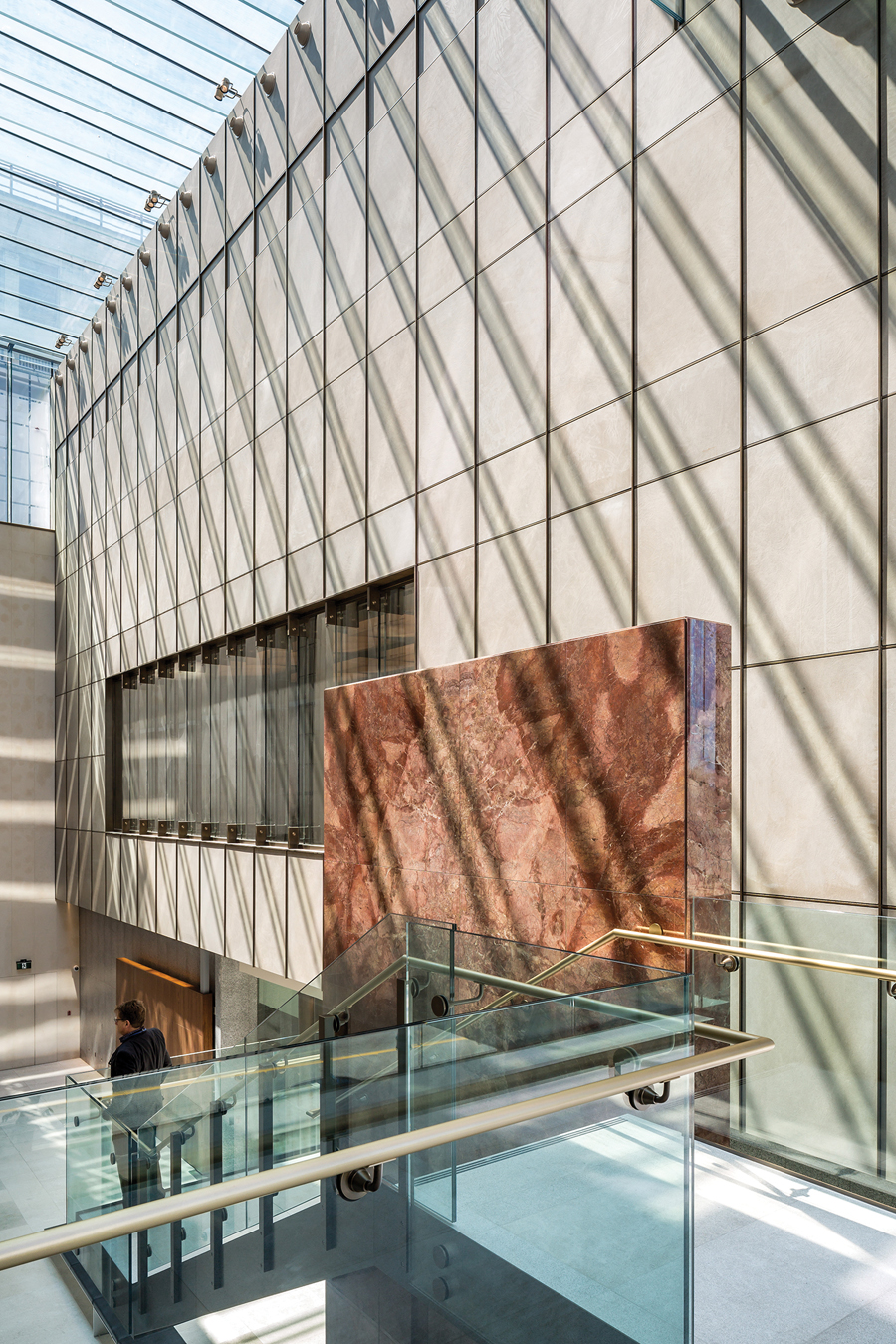 David Clusiau, FRAIC, senior principal at NORR, joined with conservation architect Mark Brandt, MRAIC, to lead the teams responsible for preserving and updating the heritage exteriors and interiors of the original building, while adding 3,100 square feet of meeting and auxiliary space in a new addition. To retrofit the space for the 21st century, the brief included integrating modern security, multimedia and food service requirements into the plans. In other words, add sparkle and spaciousness—but never forget that the new Confederation Room and its surrounding spaces must be exceptionally functional.

It’s interesting to note that in 1932 The Royal Architectural Institute of Canada awarded architect Ernest Barott a gold medal for his design of the bank, remarking that the building “has been designed to harmonize with its impressive setting and simplicity has been the keynote.” For customers of the bank, the understated elegance of the exterior, in concert with the well-appointed interior, provided a daily reminder of the significance of the bank and its mission. Eighty-three years later, the addition of a modern Annex to the restored main building garnered an Award of Excellence from the City of Ottawa at its annual Urban Design Awards. In 2016, noble architecture once again acts as a cue to the building’s inhabitants, subtly prompting parliamentarians to recall the importance of their calling.

The Annex was envisioned by Clusiau as a sympathetic contemporary addition that defers to the heritage landmark by preserving the temple-view of its west façade. “The Annex is not meant to be a landmark in its own right. It’s designed to set up visitors to better appreciate the existing building,” explains Clusiau. With that recognition as a starting point, the contemporary addition both completes the Confederation Boulevard street edge while seeming to almost hover above the sidewalk. The main entrance for most visitors is through the Annex, and the first order of business is to pass through post-9/11 security. The key, says Clusiau, was to incorporate the necessary safety features with dignity, minimizing their role. He accomplished this by designing a “visual spiral,” with floor-to-ceiling Eramosa limestone, cut in striated and fleuri patterns, drawing the visitor’s eye upwards as they enter the Annex. The richly veined stone guides visitors through the security apparatus, then back toward a showpiece staircase that spirals around signature slabs of rich red Cape Breton marble. Here,
a striking glazed roof floods the area with natural light as visitors ascend to the second-floor meeting room, all the while enjoying unobstructed views of Parliament Hill.

Upstairs, a spacious mezzanine presents particularly lovely vistas of the West Block’s gothic Mackenzie Tower. The attached meeting room, suitable for up to 200, is a graceful melding of the traditional and the contemporary, with fine wood panels providing gravitas, and a coffered ceiling and canted light cubes creating visual interest while also complementing the traditional coffered ceiling in the main banking hall. This is a space that is of its time, even as it pays homage to the architecture of the past—a room that exhorts parliamentarians to look to the future as they contemplate the traditions of their constituents.

The understated style of the Annex sets the requisite tone for consultations and small conferences, while recognizing that the real emphasis rightly belongs with the rehabilitated Bank of Montreal building—and, in particular, with the former banking hall.

On entering the main hall, the visitor’s attention is drawn first to the magnificent coffered ceiling. For nine months, scaffolding took workers to within five feet of the coffered panels as they worked on cleaning, touchups and repairs. “Picture what 80 years of nicotine floating up through the air had done to that ceiling,” says Brandt. “We marked every spot that needed work with a colour-coded ribbon and it looked like a party zone up there.” A poultice of seaweed and rice paper developed in Japan was used to clean the ceiling, which was then meticulously repaired and repainted. New acoustic coffer panels, set within the rehabilitated ceiling, conceal fire sprinklers and ventilation infrastructure.

From the glory of the ceiling, the visitor’s gaze travels down to three splendid chandeliers, evenly spaced along the grand expanse of the main hall. Over three metres tall, they were completely restored and, in the process, re-lamped with energy-saving LEDs. During the rehabilitation, new uplights were also added to highlight the delicate filigree of wall patterning. Secondary spaces—the south hall entrance and a former staff cafeteria on the second floor, now turned small meeting room—are ornamented with smaller versions of the chandeliers.

If the visitor can tear her eyes away from the upper half of the room, she will be struck by the rehabilitated marble floor that flows through the centre of the hall, matched with new terrazzo along the sides. Once again, a careful restoration is paired with modern technology—underneath the yesteryear glamour, radiant heating and cooling keeps the room comfortable. One of the key challenges for the architects was integrating heating, cooling, and ventilation systems that would preserve the heritage building, given that upwards of 500 people will congregate for the largest galas. Among their creative solutions are
the unobtrusive speaker benches, which fulfill multiple functions, cleverly concealing air supply components, a fire alarm system, a speaker system and voting lights.

The entire scene is bathed in a cathedral-like radiance, courtesy of lofty double-paned windows that run the length of the hall. The inner pane has a yellow tint, which creates a golden glow on sunny days. Experts matched the colour of broken panes, yielding light uniform in hue. Outside, intricate ornamental grilles, parts of which had become severely oxidized over time, have been brilliantly restored. (It’s a pity that seen from the inside, acoustic curtains often obscure the windows, drawn when meetings take place and projector screens and other audio-visual aids are in use.) The façade of the Annex picks up on these materials, expressing the grid of the main building throughout and interpreting it in new ways—bronze insets play off the makeup of the metal grilles, while glass blades in between the window panels emphasize the vertical nature of each panel.

When asked to sum up their experience working on such a historically significant project, Clusiau and Brandt are humble yet proud. “It’s spectacular how it all turned out,” says Clusiau. “We kept pulling rabbits out of hats to solve the many problems that come up with a heritage building like this, but everyone worked together to get it done.” Adds Brandt: “Any modern interventions had to be in harmony with the existing building. There was real integration between our firms in the design process. The whole project has a quiet dignity.”

That dignity is steeped in the old, but with an eye to the future; respecting Canada’s past, but not nostalgic in tone. The new cohort of MPs, and the veterans who will guide them, cannot help but be invigorated by such a vibrant meeting and ceremonial space, one explicitly designed to encourage interactivity, big-picture thinking, and, above all, optimism.

Sarah Brown is an independent writer and editor based in Ottawa. She specializes in writing about design.

Green to the Max: Mosaic Centre for Conscious Community and Commerce, Edmonton, Alberta