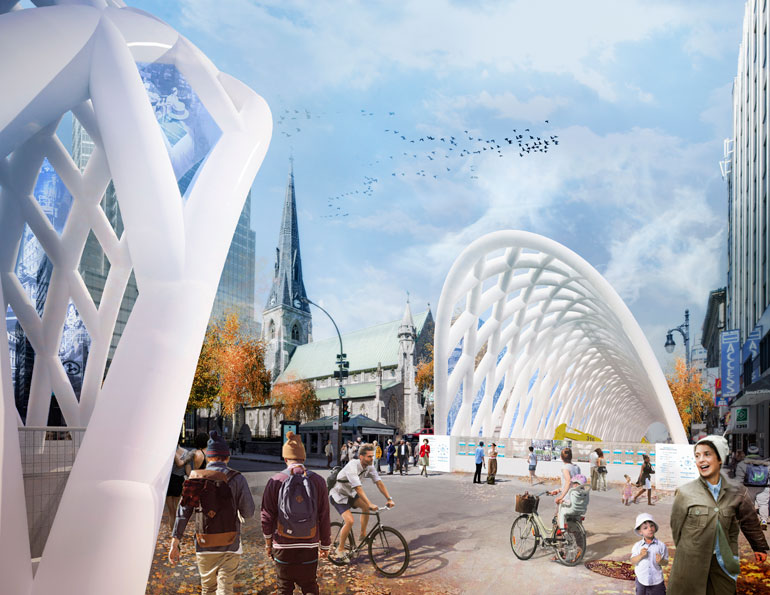 Several blocks of St. Catherine Street, a main commercial artery in downtown Montreal, are undergoing a four-year infrastructure improvement plan. During this renewal, segments of the street will be closed to vehicular traffic, but businesses will remain open. Imago won a City of Montreal competition as a creative means of minimizing the construction process’s negative impacts. The competition sought design solutions for an “innovative urban experience” that would direct the flow of people, reduce construction-related disruptions, and disseminate information about the work and its progress.

An imago is the adult stage of a winged insect. This project features modular, inflatable catenary arches with latticed intermediary members that, like a butterfly’s wing, combine lightness, strength and flexibility. Hinged at the top and anchored to concrete construction fence sections at the bottom, the connectable arch components are width-adjustable. Widened, they enclose construction work on the central roadway. When work shifts to the sidewalks along the perimeter, narrowed arches form a sheltering, vaulted pedestrian corridor that can double as a temporary event space.

The inflatable structures are composed from a recyclable high-resistance polymer, and their structural efficiency makes them easy to move and erect. Some of the diamond-shaped voids in the modules are left open for natural ventilation, while others are filled with translucent historical images that narrate the evolution of St. Catherine Street.

Manon Asselin :: It’s great that the city recognizes the need for these kinds of interventions and is investing in a temporary structure. This one is particularly intelligent because it uses air, and presumably, you can dismantle it and move it somewhere else in the future. It’s a great intervention.
Patricia Patkau :: While we have seen inflatable archways before, the innovation here is in using an inflatable form as an urban repair tool—a band-aid for the city while things around it are under construction. It’s essentially a kind of alleviating device and a mechanism that works to everyone’s benefit. It’s a very interesting and innovative attempt to deal with a temporary and specific condition in the city of Montreal, yet it is generalizable to any city with similar disruptive situations.
David Sisam :: Sections of our large cities are being dismantled because of aging infrastructure. Given this constant state of repair and restoration, it’s encouraging to see that someone has provided funding to instill a sense of joy in the process. In some respects this light, portable and reusable inflatable structure celebrates the city’s renewal.