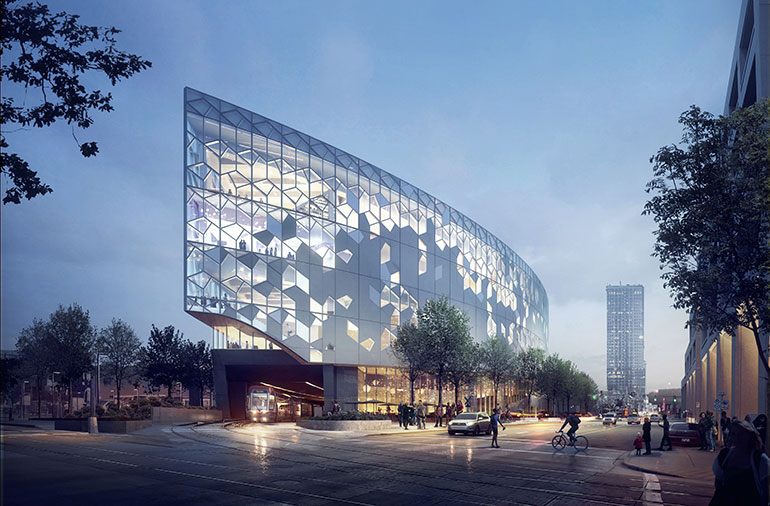 Following a two-year process of community engagement, the design for Calgary’s new civic and cultural centre realizes the city’s vision for a technologically advanced downtown public space for innovation and research.

The landscape and architectural design embraces the city’s diverse urban culture and unique climate. The site, where downtown Calgary intersects with the East Village, is transformed into a terraced topography inspired by the nearby foothills; it is made to rise up and over the exiting Light Rail Transit (LRT) line that runs through it.

Like mini-amphitheatres, the resulting terraced seating areas will be used by the city and the library for informal events and as outdoor classrooms, while also providing the community with generous spaces for outdoor reading and pop-up performances. Plantings that reference the native landscape—including elms and aspens lining the plaza’s surrounding streets—draw Calgary’s mountains and plains into the cityscape.

Upon entering the library, visitors encounter a lobby awash with natural light. The eye is drawn up through the skylit atrium, where the library’s public program and circulation along the atrium’s perimeter are clearly visible. The latter acts as an intuitive wayfinding strategy from the main entrance and on each floor.

The library’s program is organized on a spectrum of “fun to serious” as visitors climb the building, starting with active public programs on the ground floor, and spiraling up to quieter, focused study areas on the third and fourth floors. This strategy accommodates the extra activity created by the LRT’s passage underneath the building.

The building and its plaza serve as a mixing zone that reconnects the East Village and downtown, and restores the flow of downtown’s main pedestrian spine. The site where these two neighbourhoods meet is bifurcated by the path of the LRT line as it transitions from above- to below-grade. The lifted library, with an open entry at the heart of the site, allows for a visual and pedestrian connection between the two neighbourhoods. Framed by wood-clad arches that reference the Chinook arch cloud formations common to Alberta, the entry will
open up a new outdoor civic space within the city. By re-imagining the streetscape as part of an aggregated public realm surrounding the library, this area will become an accessible, walkable and important civic space in the heart of Calgary.

One of the project’s most challenging technical considerations is the bridging of the LRT. A concrete structure approximately 160 metres in length encapsulates the LRT tracks where they exit the existing tunnel portal. The library building above spans across the 12.1-metre track width so that column loads are supported vertically, rather than resting on the encapsulation structure’s roof.

MF: This project offers nice urban connections between the streets. The shape is driven by the curve of the rail line, which gives rationale to the plan and overall organization.
PH: From the inside, the reading of the structure against the façade creates visual interest. We had some concerns about whether the building could be more specific in its identity as belonging to Calgary.
JH: The interior atrium is an inviting, generous civic space, at a natural centre point within the eye-shaped volume. The strategy of concentrating interior and exterior circulation routes at this point is clear and completely appropriate in this context.