A bold blue addition transforms a suburban bungalow into a series of unconventional spaces for family living.

As you travel down Third Street in Lakeview, Mississauga—a neighbourhood just west of Toronto—a monolithic volume on a corner lot stands out for being unlike anything else in the suburban residential area. Neighbours have nicknamed it “the blue house,” and from certain angles, the blue-faced block looks like an entirely new construction, rather than an addition to an existing home. It has no windows and minimal details. An inset cedar door and an exaggerated scupper are the only hints of the spaces on the other side of the punchy metal siding.

Architect and homeowner Joey Giaimo admits the design doesn’t fit within a familiar mold: “It confuses people a bit.” The rectangular form is nonetheless proportioned to mediate between the bungalows next door and two three-storey residential buildings across the street; the latter help fill a noticeable gap in multi-family housing. Beyond the blue, you can catch glimpses of a volume tucked behind, suggesting there is more than immediately meets the eye. 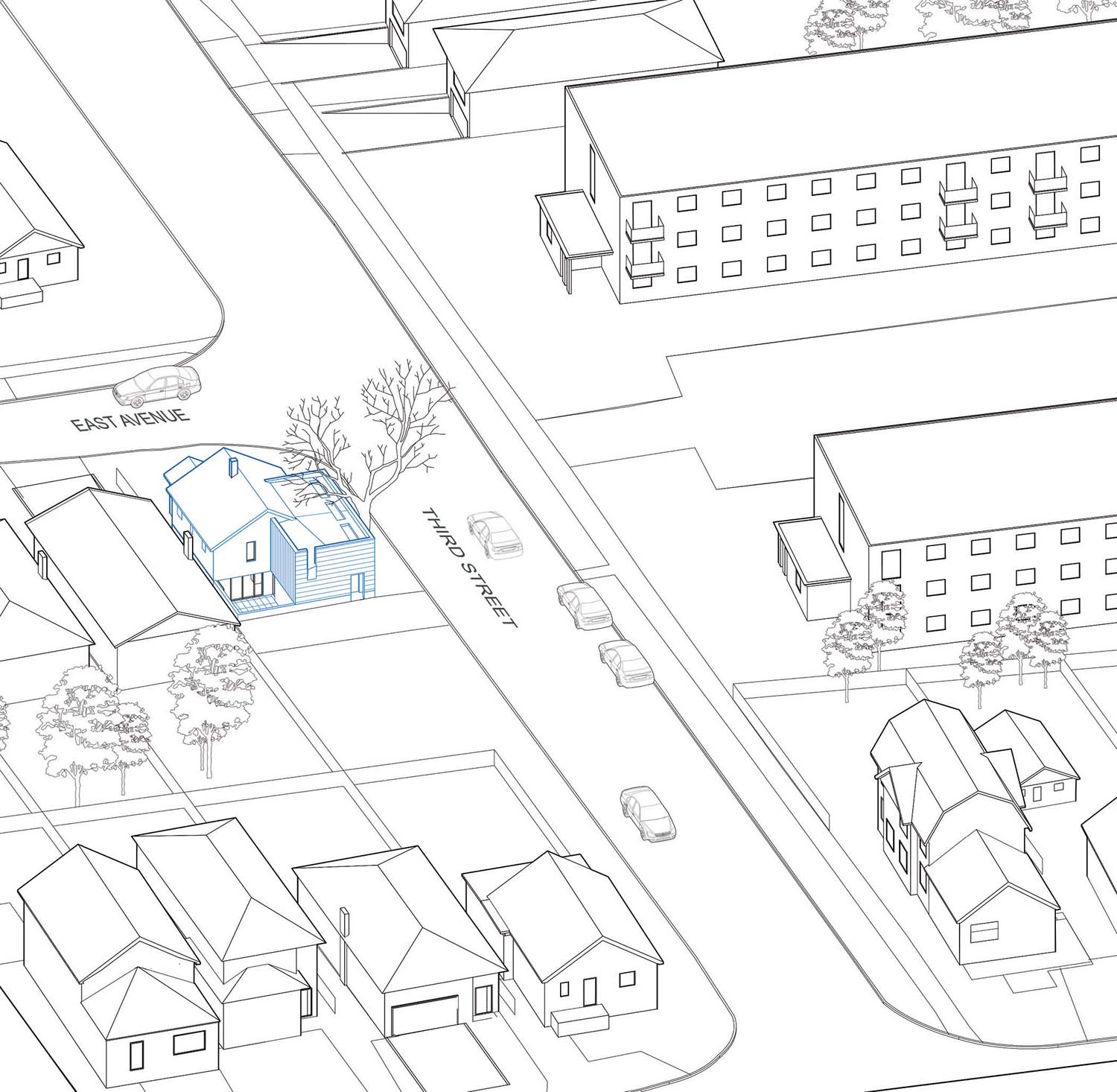 Giaimo’s architectural practice favours working with existing conditions. In his work for clients, as well as on his own home, he resists a recurring process: “the default to buy a property, tear it down, and build from scratch.” Glancing down the street, numerous Lakeview bungalows have been razed and replaced with two- and three-storey counterparts, with footprints pushing at lot limit-lines. Clad with stucco and stone veneer, they reflect a commodification of shelter—a phenomenon that has intensified in recent years in the Toronto region. Properties are purchased for land value. More square footage is added, in new houses that shelter fewer and fewer people.

Turning the corner on East Avenue reveals another face to Giaimo’s suburban house. This façade—the original entry to a 1920s bungalow, which has been kept in place—has the age that the other lacks, and is partially obscured by maturing trees and shrubs. The materials here are largely untouched and unconcerned with keeping up appearances.

The rectangular footprints of the old house and the new addition intersect inside the home. The frame to the Third Street door was preserved, and serves as the threshold between the two. Inside the addition, layers were peeled away to reveal the original exterior pine sheathing. Meanwhile, new gussets transfer loads between wood joists and studs that frame a skylit stepped entry hall that extends out towards the street. 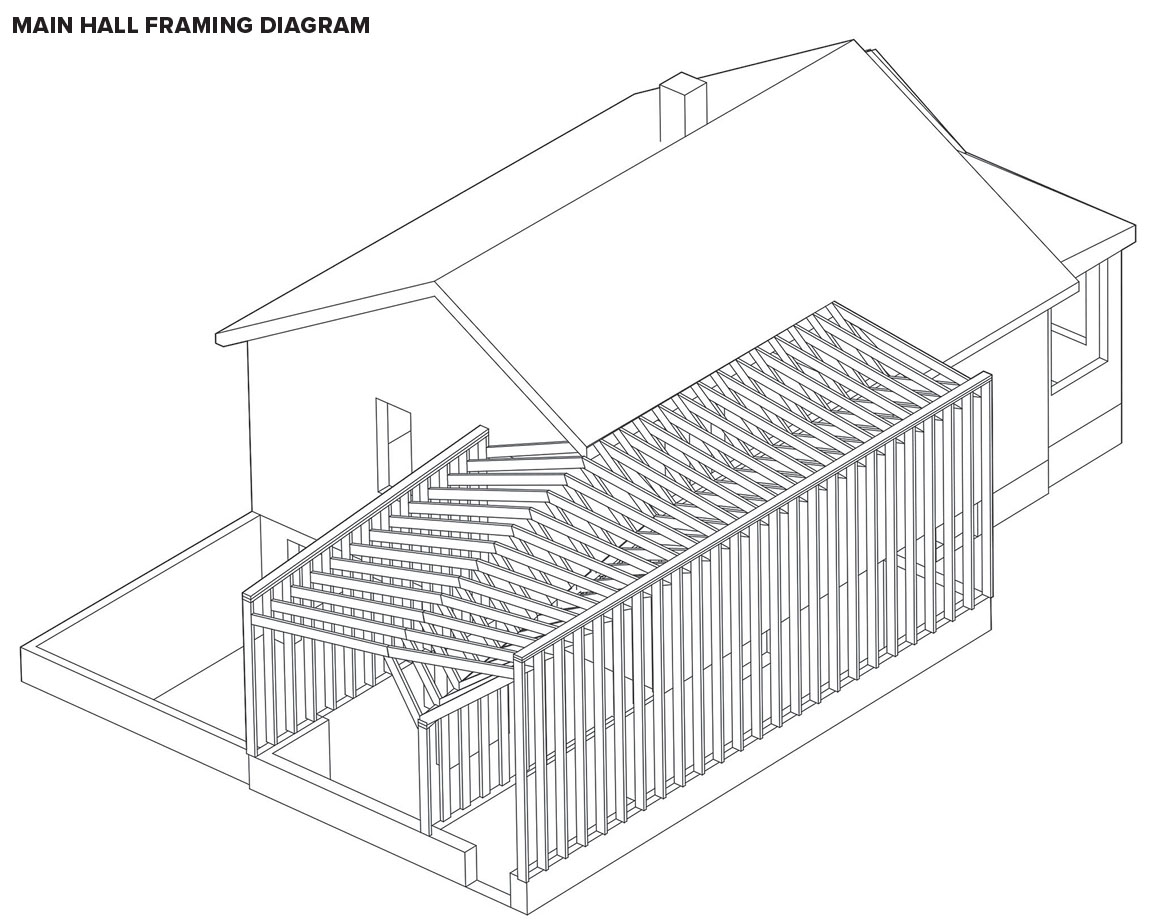 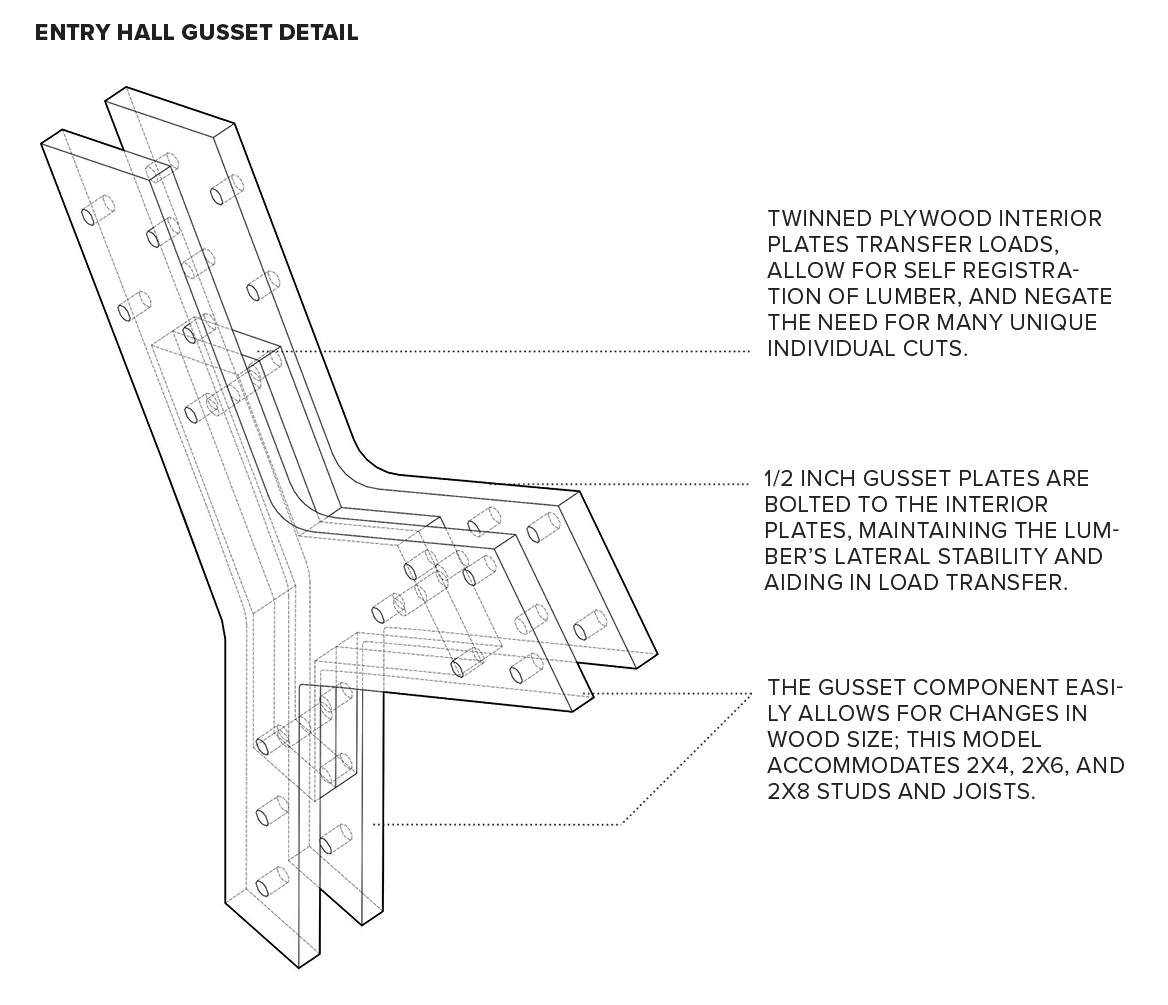 The work demonstrates there are options beyond teardowns—even for a small bungalow. Thinking creatively about reuse and renovation is even more important when it comes to larger buildings and ensembles, like those recently targeted for demolition at the Dominion Wheel and Foundries site in Toronto. Giaimo previously worked with heritage specialists ERA, and says he aims to take guidance from existing built conditions—regardless of whether they are considered generic or have formal heritage recognition. 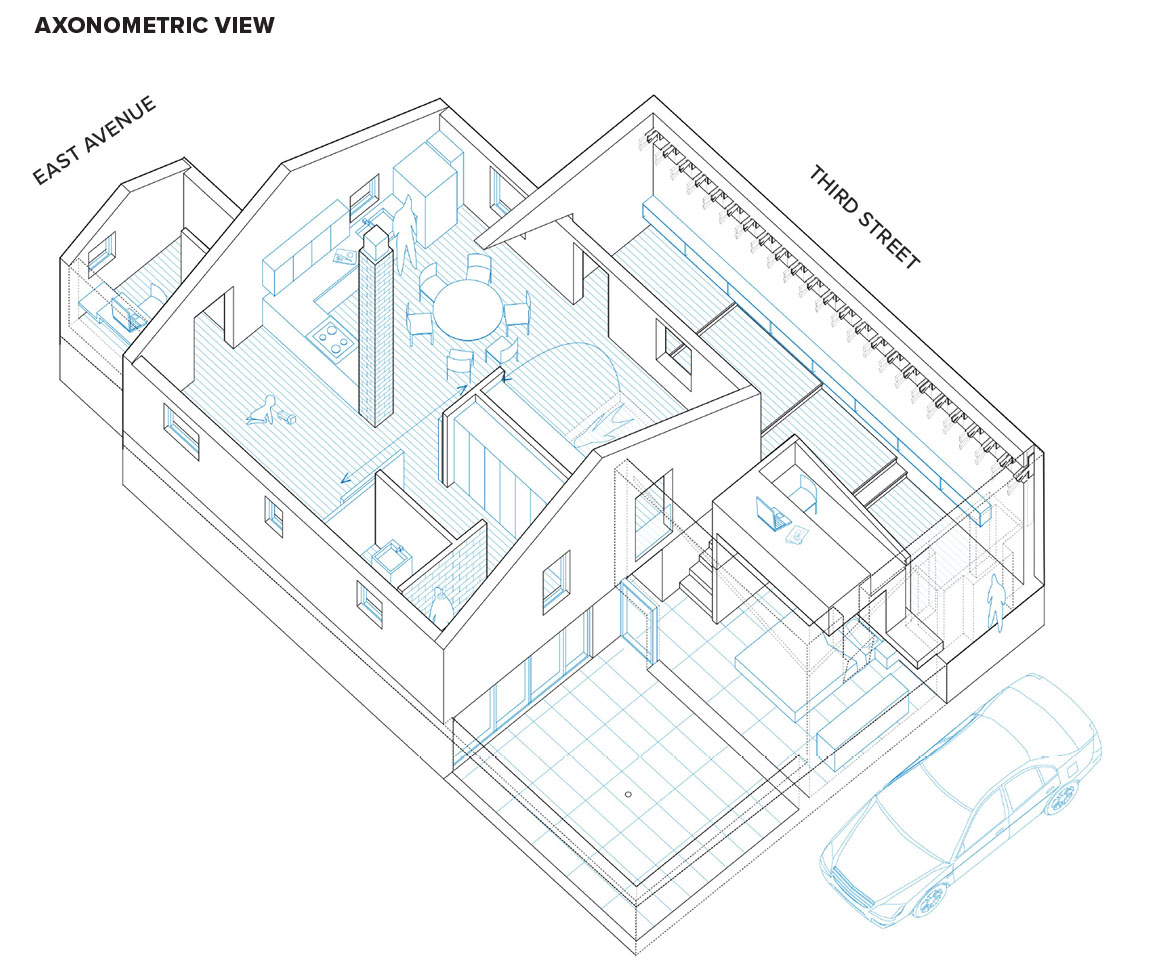 For his own house, the design was influenced by studying the varied additions made to nearby detached houses over decades. These single-family homes and the lots they occupy are an outcome of a centuries-long process of land dealings and annexations. The 1806 Head of the Lake Purchase between the Mississaugas of the Credit and the Crown exposed the land that is now called Lakeview, along with its surrounding waterfront, to accelerating systems of colonization. Territory was surveyed, and concession roads were laid out to give new settlers access to lots. World War I pushed land use around Mississauga’s waterfront towards industrial manufacturing, with heavy infrastructural investments in the nearby Lakeshore Road, the railway, and later, the Queen Elizabeth Way expressway. New houses were built for returning war veterans, while farms were sold for detached suburban development.

Giaimo believes that the original house at Third and East was likely a model used for a residential Ponzi scheme, which advertised a new Lakeview Park development and collected deposits on lots that were subsequently abandoned. Over the decades before Giaimo and his wife and business partner, Joanne Casiero, purchased the property, few changes were made. They chose to keep the 1920s house, making incremental adjustments as their family grew. A 2010 renovation retained the overall massing while opening up its interior spaces. They removed all interior doors, placing a Murphy bed in the bedroom and using sliding partitions to encourage a flexibility of uses between living, sleeping and eating areas.

The blue addition was spurred by the arrival of the couple’s second child. The new hall reorients the main entrance; inside, stepped platforms rise from grade to meet the existing floor. The hall is sheltered from the street and topped by a set of wood joists laid out in a skewed formation, breaking from the rigidity of the exterior form. In addition to serving as a mudroom, the hall is used variously as a play area, workout zone, and home movie theatre. Giaimo’s sons pick books from the one-tier wood shelf that lines the exterior wall and sit on the retained window ledge (which joins to their bedroom) to read. As they grow, Giaimo plans to revisit the connection to the loft space located next to the entry door—currently used for storage—to provide a more private space to read and work.

While the hall marches up to meet the height of the original house, the rest of the renovation opts to go down. Within the footprint of the addition, a stairway leads to a double-height main bedroom. The loft, accessed from the hall above, extends above the bed, while an original window frame offers a view back to the kids’ bedroom in the old house.

Carrara marble panels, reclaimed from the reskinning of Toronto’s First Canadian Place, are used as flooring to blend between the addition and the existing basement. The marble extends outside into a new sunken courtyard, with sliding glass doors that bring in natural light below grade. The renovation transforms the basement into an extension of the living space, while still providing necessary storage and mechanical areas.

The spaces in the resulting home do not fit simple categorization. A large living space flexes as a work-from-home office; pre-pandemic, the family would host guests around an extended dining table by popping up the kids’ Murphy bed and throwing open a sliding partition. As the family ages, they’re also viewing the spaces differently. A desire for more privacy has entered the conversation. “It’s too open,” says Giaimo. This has advanced plans for an at-grade addition where the existing sunroom sits along East Avenue, wrapping the west side of the original house.

For the long-term future, Giaimo and Casiero are proposing the addition of a second residence on the other side of the permeable driveway. This would allow them to share the corner lot of land with another household, and would assist in incrementally increasing suburban density. So far, the alterations to their home have worked within the one-family detached dwelling zoning for the lot—part of the Mississauga by-laws that have been instrumental in shaping the area’s relatively limited housing options. Constructing a second detached living space would require challenging these limitations. Giaimo’s ongoing plans for South House show how our attachments to existing conditions—to physical places, as well as to the policies that shape them—can both ground us, and spur us towards well-considered change.

Monica Hutton is a sessional lecturer at the University of Toronto John H. Daniels Faculty of Architecture, Landscape, and Design and practices in the fields of architecture and urbanism.