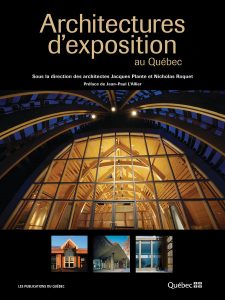 The final volume in a trilogy of books on Quebec cultural buildings, Architectures d’exposition presents a detailed analysis of 36 exceptional museums, interpretation and exhibition centres in Quebec since the early 1980s. These are complemented by 11 essays by architects, historians and museum directors.

Roquet’s expertise is felt in the book’s deep understanding of the issues surrounding architecture that interfaces with historical settings. Architectural conservation practices and conceptual approaches to the evaluation, interpretation and development of heritage sites were especially important in the building of interpretive centres at Fort Chambly (1982) and the Monastère des Augustines de l’Hôtel-Dieu-Lieu de mémoire habité (2015).

The authors are remiss in leaving out the Canadian Centre for Architecture, an international research centre and museum of broad renown. They should be applauded, though, for their inclusion of three First Nations projects: Aanischaaukamikw Cree Cultural Institute in Oujé-Bougoumou (2011), Musée des Abénakis in Odanak (2005) and Shaputuan Innu Museum and Cultural and Heritage Centre in Uashat (1998). These projects are not often addressed; here they grace the book’s cover.

A preface by former Québec City mayor Jean-Pierre L’Allier is particularly moving. The visionary L’Allier—who passed away earlier this year—argues passionately for continued funding of culture and investment in quality architecture.

Much like libraries, museums are rapidly going beyond their traditional mandates and becoming “third places” between work and home. They are being actively reinvented, by museum directors and architects alike, as crucial sites for civic engagement, democracy and establishing feelings of a sense of place.