The Architecture+Design Film Festival will again take place in Winnipeg on April 18th to 22nd, 2018.This year’s festival will present 24 films from 10 countries including Ireland, England, Spain, Denmark, Australia, Netherlands Germany, Canada and the USA. Several of the films are Canadian premieres. 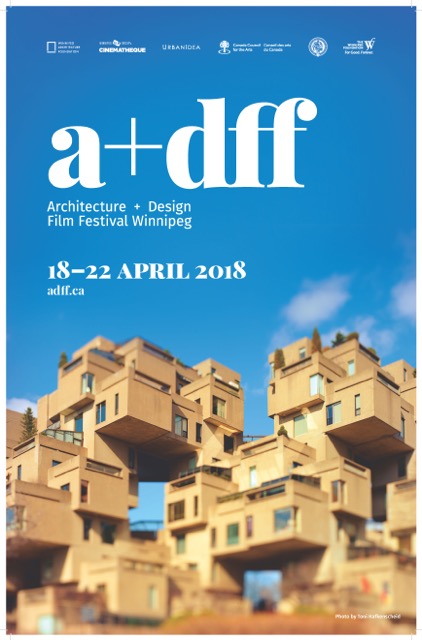 Most of the films will screen at Winnipeg Cinematheque, 100 Arthur Street (advance tickets and passes are now on sale here). There will also be several free screenings at Old Market Square, Forth Cafe and noon hour screenings at the Millenium Library and the WAG.

On Saturday April 21st at noon, at Cinematheque, join us for the free screening of the Archishorts film competition winners. Entries this year were from Ireland, England, USA and Canada. Archishorts is a competition for films of 2 minutes or less on topics of architecture and urbanism.

Glen Murcutt- Spirit of Place
Glenn Murcutt – Spirit of Place explores the life and work of Australia’s most celebrated architect. The film sheds light on Murcutt’s exquisitely modern yet environmentally sensitive approach to design, and his relationship with a special community of clients and collaborators as his design for a unique mosque comes to fruition.

REM
A documentary about legendary architect and master provocateur Rem Koolhaas, directed by his son Tomas Koolhaas. REM uses an unconventional approach by combining the human stories and experience of both the architect and the users of his architecture.

Five Seasons: The Gardens of Piet Oudolf
This documentary is a look at the life and work of Piet Oudolf, arguably the most influential landscape designer of the last 50 years. Responsible for planting New York’s High Line and other iconic urban spaces, Oudolf is in high demand for his visionary ideas of what gardens, and particularly public space, can be, and do.
Stay for a panel discussion after the film, with members of the Manitoba Association of Landscape Architects, chaired by Ismaila Alfa, CBC Radio One.

Relics of the Future
The Rotterdam born photographer Toni Hafkenscheid wants to photograph the world as he saw it as a boy, in the book Wonders of the World. With a fascination for futuristic architecture—such as Marina City in Chicago, the Gateway Arch in St. Louis and Habitat ‘67 in Montreal—he takes us on a fascinating journey where he learns again to see with wonder.

Building Hope: The Maggie’s Centres
After she was diagnosed with terminal cancer, Maggie Keswick Jencks, the wife of the celebrated architectural historian Charles Jencks, launched an initiative to build a series of remarkable hospices for cancer patients. Twenty years after her death in 1996, some twenty Maggies’s Centres have been built by leading architects. A fascinating film about the search for consoling beauty as death approaches.

Portrait of a Gallery
In 2011, the National Gallery of Ireland in Dublin closed its Merrion Square entrance and two thirds of the building to begin one of the largest refurbishment projects in the history of the state. The film documents the mammoth challenge faced by architects Heneghan Peng and others as they attempt to feed modern services beneath protected historic buildings, while opening up new spaces never-before-seen by the public.