In June 2008, Prime Minister Stephen Harper stood before Parliament to make a formal apology on behalf of the federal government to survivors of Indian residential schools. In his response, Phil Fontaine, nation­al chief of the Assembly of First Nations, stated: “Emboldened by this spectacle of history, it is possible to end our racial nightmare together. The memories of residential schools sometimes cut like merciless knives at our souls. This day will help us to put that pain behind us.”

This formal apology gave impetus to the work of the Truth and Reconciliation Commission (TRC), established earlier that month, which began to gather testimony from residential school survivors in a series of private and public meetings held across the country. Many of the revelations that emerged from these meetings were both new and shocking to non-Indigenous Canadians, confirming the critical gaps that persisted throughout the country’s public education system.

Then, in the fall of 2013, a visit by the TRC to the University of British Columbia prompted an announcement by UBC President Stephen Toope: “Post-secondary institutes must play the particular role of furthering a deeper understanding through research and an advanced level of intercultural discourse,” he proclaimed. “Through ongoing education, Canadians must come to a shared understanding of the circumstances that have shaped Aboriginal experience, so that we may all begin to know and to value one another.”

At this meeting, Toope also announced UBC’s commitment to the creation of the Indian Residential Schools History and Dialogue Centre (IRSHDC), designed by Alfred Waugh, MRAIC, of Formline Architecture and opened in April 2018.

The mandate of the IRSHDC is to acknowledge the suffering of the 150,000 Indigenous students who attended residential schools across Canada, to honour the memory of the more than 6,000 children believed to have died in these institutions, and to promote dialogue that connects past injustices to today’s human rights movements.

Waugh is a member of the Fond du Lac Nation of northern Saskatchewan, and his mother attended a residential school; he brought his own lived experience to the resolution of a building program that is modest in scale, but rich in symbolism.

The chosen site was a large sunken courtyard between the Koerner Library and the Irving K. Barber Learning Centre, the locus of memory and record-keeping for the university and the public it serves. As an urban design exercise, the challenge was to give the 620-square-metre building a strong presence amid its much larger neighbours while respecting an existing view corridor that runs diagonally across the site. (The view corridor runs from the Millennial Time Machine, a public art installation by Rodney Graham, to the large sequoia tree on which the artwork’s camera obscura is focused.)

The initial site analysis concluded that the program could best be accommodated in a vertical structure built at the southwest corner, on the roof of the subterranean Sedgewick Library. However, detailed struc­tural investigations determined that this approach was not economically feasible, so a low rectangular solution was proposed instead, to be built at courtyard level and extending along the south boundary of the site.

This configuration, while compromising the connection to the adjacent streets, offered the opportunity to establish a much stronger relationship with the courtyard. Waugh worked closely with the landscape architects at PFS Studio to ensure that the courtyard would become an oasis for quiet conversation and contemplation, a respite from the busyness of the surrounding campus and an outdoor room for the IRSHDC.

Waugh’s design reflects the desire of Linc Kessler, director of the UBC First Nations House of Learning, for the architectural expression to communicate the diversity of the Indigenous peoples of Canada, rather than being identifiably associated with any particular culture group.

Waugh also sought input from Elders of the local Musqueam First Nation, some of whom were residential school survivors. They spoke of their feelings of confinement and disconnection in those buildings, which afforded them only the occasional glimpse of the outside world through small, high windows. With the participation of survivors being a key to the Centre’s success, Waugh made openness and transparency a primary focus of his design.

The program is arranged on two levels, with the main entry, administrative offices and meeting rooms on the upper level, and the exhibition area—known as the Vault of Memories—and communications and electrical service rooms on the courtyard level below. From the east-facing main entry, approached down a curving ramp, visitors descend a generous staircase with panoramic views to the courtyard through a glulam-framed glazed curtain wall to the right, and woven cedar paneling lining the wall to the left. The curtain wall offers light, views to nature and the sense of openness requested by the Elders, while the woven cedar paneling recalls the basketwork that is common among Indigenous cultures across the country.

At the bottom of the stairs, a cedar-clad reception desk and portal mark the entrance to the Vault of Memories. This space is large, open and unadorned, with continuous glass doors providing visual connection and physical access to the paved portion of the courtyard. The cantilevered meeting rooms on the upper floor offer weather protection when the sliding doors are open. The roof of the Vault is accessible from the street above, with seating steps overlooking the courtyard. Gatherings in this area can be catered from a small kitchen located in the administration area on the upper level.

In a building of this size, the architectural gestures must be carefully chosen and carried through with a combination of confidence and restraint. Waugh, with modernist sensibilities developed while working with Peter Busby, FRAIC on projects like the Nicola Valley Institute of Technology, nonetheless compares his design approach to that of Haida artist Robert Davidson, who re-interprets his own Indigenous roots and traditions through an unmistakably contemporary lens.

Thus, regional modernism is mixed with cultural metaphor. The exterior wall that flanks the entrance is clad in charred cedar planks, a traditional Indigenous material made more resilient through a process of scorching. The simple, asymmetric butterfly roof collects rainwater and channels it to a sculptural copper and glass scupper before discharging it to the courtyard pond. The copper, a material generally reserved for chiefs, connotes status in Indigenous cultures, and is also associated with prestigious public buildings in the Western world. The running water, sparkling in the sunlight, also symbolizes tears. 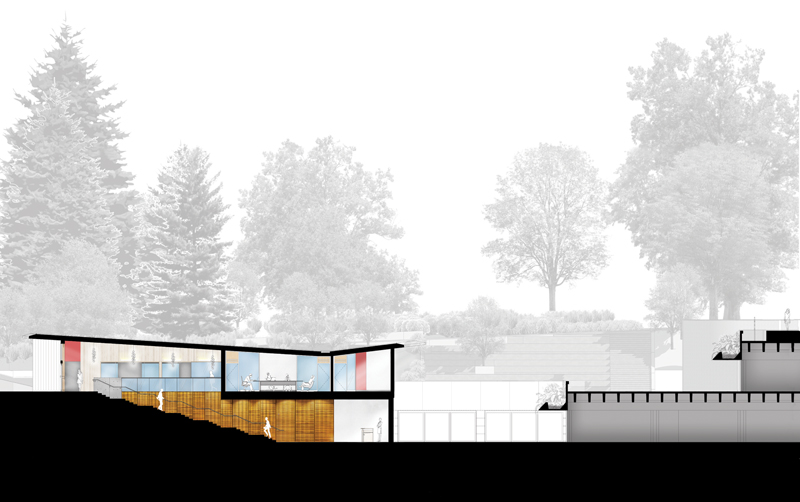 Inside, the east wall of the Vault of Memories includes three large interactive screens that work together to project a single image for a large audience, or divide to enable six people to explore the content indivi­dually. A map of Canada identifies all 132 residential schools, and each location can be opened up to access videos, still photography, survivor testimonials and other documentation.

Viewing these records of past wrongs is at once painful and poignant: not simply an uncomfortable journey into history, but also a call to action in today’s turbulent times. As Ry Moran, director of the National Centre for Truth and Reconciliation at the University of Manitoba, observes: “It’s essential … not only that we celebrate who we are when we’re at our best, but also that we never forget who we have been when we’ve been at our worst.”

The Indian Residential School History and Dialogue Centre helps us do both.

Jim Taggart is a Vancouver-based architectural journalist and educator.
Photos by Andrew Latreille.

Why I Design comes to Museum of Vancouver on November 3