In 1949, two friends who had tired of the long lines at Quebec’s ski hills set out to found a new ski club north of Toronto. When looking for a site, the pair heard from local farmers that the Niagara Escarpment’s best snow conditions were found on the slopes above Poplar Sideroad, near Collingwood.

The recent renovation of Osler’s clubhouse, completed by Toronto-based firm Williamson Williamson, is similarly attuned to the local context, with materials and a design tailored to its cottage-country setting.

Based on a masterplan completed by predecessor firm Williamson Chong in 2014, the design renovates the existing 1970s lodge and adds a new bay to the pleated-roof structure. The addition extends the main-level dining room, housing childcare and auxiliary spaces below. It foregrounds a dramatic pair of Y-shaped wood-and-steel columns—a contemporary version of the heavy timber columns of the original structure.

The decision to renovate rather than rebuild was a matter of budget and wanting to keep the spirit of the existing clubhouse, but it was not a simple task. “Renovations are incredibly complicated,” says architect Betsy Williamson, who describes how the original building was covered in asbestos, and constructed on a base of core slab, atop foundations that had no capacity to support additional weight.

“Old timber is like a house of cards—you can’t take any piece out or the whole thing will collapse,” says Williamson. The team conducted extensive remediation work to the envelope and structure, then braced each individual timber in the building to ensure the stability of the system during construction. The entire structure was conserved, with most of the timber columns left in place, and others relocated to a new lounge that looks out to the ski hill on one side, and over the dining room to the other.

In the 1970s lodge, conduit sprawled across wood ceilings with no fire sprinklers, and the winter wind whistled through inch-wide cracks that had opened in the structural columns. To address these issues, the renovation bumped the slope-side wall of the lodge out by two feet, encapsulating the existing structure behind a new façade equipped with German-designed windows. A new wood-slat ceiling maintains the cabin-like feel of the original building, while creating room for concealed sprinklers and additional acoustic and thermal insulation. Together, these moves brought the building’s Energy Use Intensity (EUI) down to 130 kWh/m2/year. “Had we been able to also replace the north façade, we would be at 90 or less,” says Williamson.

Such moves add noticeably to the comfort of the lodge, particularly at the crunch times of lunch hour and après-ski, when, in non-pandemic times, more than 800 club members fill the space to eat, drink and socialize. But what sets the project apart is its careful attention to details—a thoughtfulness typical of the high-end residences at the core of Williamson Williamson’s practice.

The smoothly curved Y-shaped columns, for instance, were inspired by the shape of early hand-carved skis, and executed with as much fastidiousness. “In our office, when we’re building with veneer, we show that it’s veneer by making it thin and flat, and when we’re building with solid wood, we show that it’s solid by carving into it,” says Williamson. “We were really specific about the direction of the veneer coming into the curve,” she adds.

A similar logic applies to a rounded wood bar and reception desk, and to a swooping stair balustrade. For the fireplace surround, stone was specified in its various cuts—with its weathered faces, seam faces, and ashlar faces exposed—and placed to reflect its natural orientation. 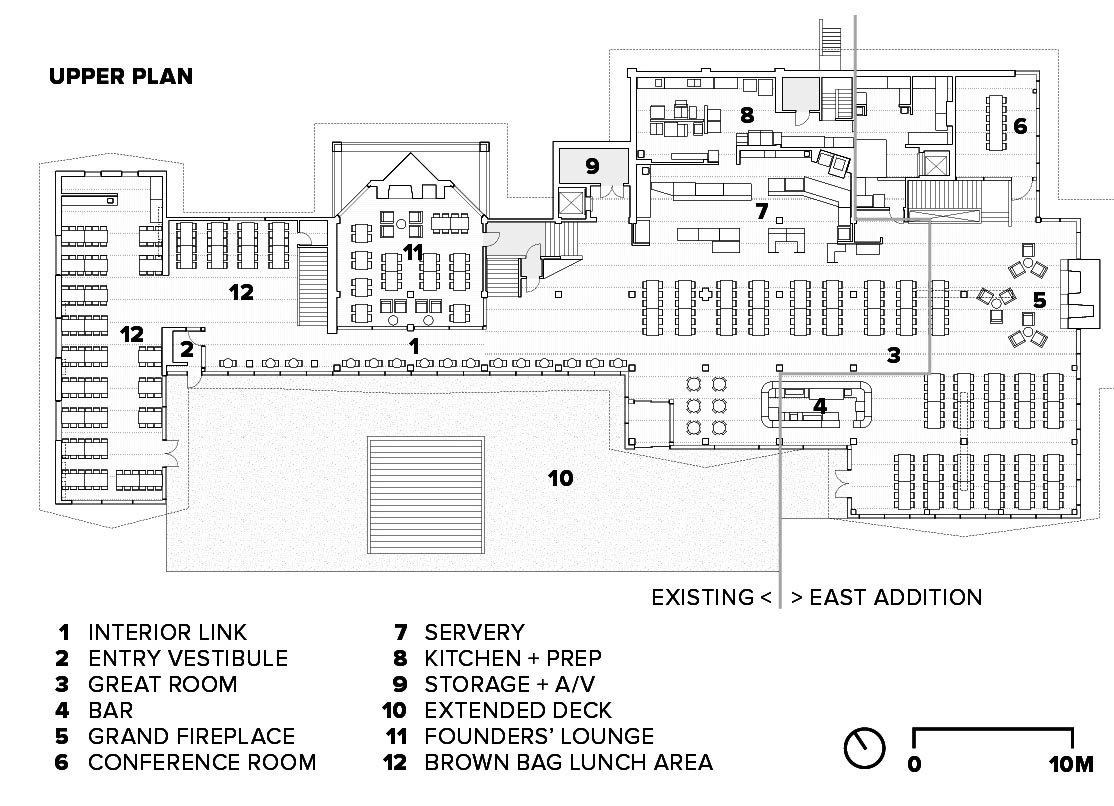 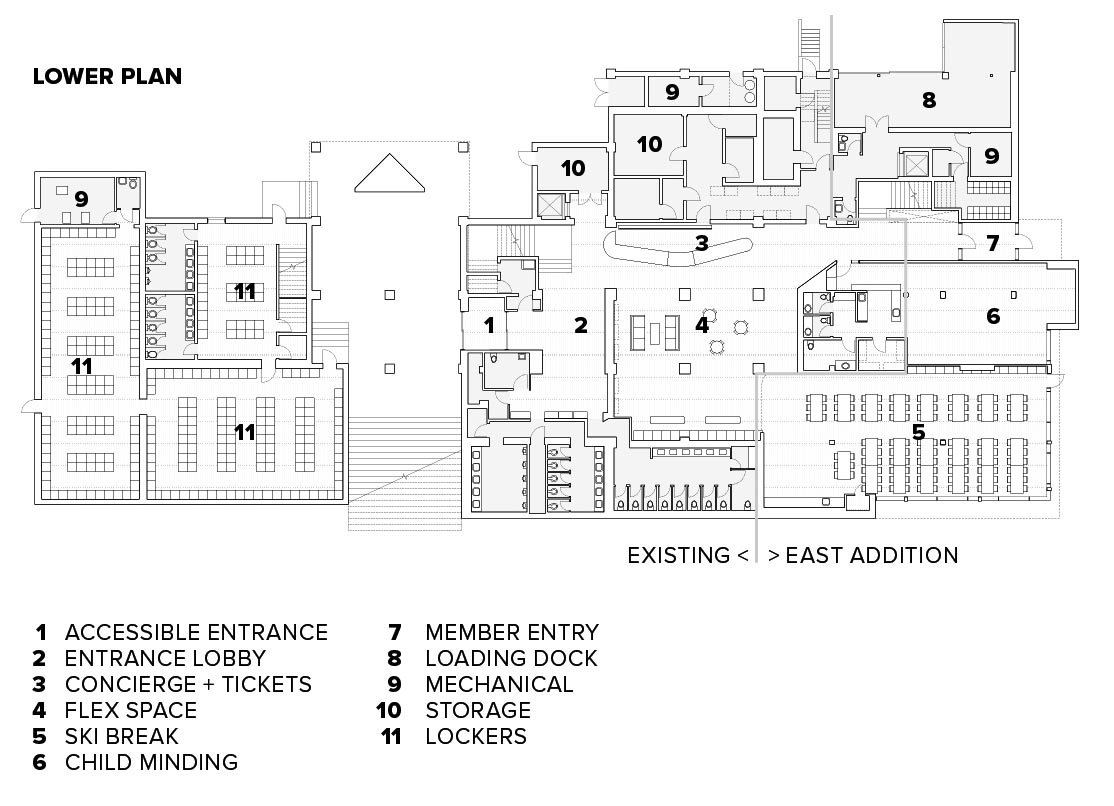 To execute their vision, the firm brought on millworkers BL Woodworking, and the club hired Upstream Construction. (Construction had started with another company in 2018, and was continued by Upstream in 2019.) Upstream—run by club member Andrew Noxon—was primarily experienced in custom homebuilding, but rose to the occasion. “It’s the kind of contractor we all know and love: works hard, super-organized, going to get the job done,” recalls Williamson. The project opened in December 2019, in time for members to hit the slopes from the renovated lodge that year.

The camaraderie between architect and contractor is evident in a subtle detail on the slope-side of the building. As the opening date deadline approached, the contractor left a panel that sits directly behind a segment of glazing in its natural oak colour to match nearby panels, rather than staining it dark brown as specified. “Dark brown is this magical colour—if you put it far enough behind a spandrel-like window, it reflects during the day, so you can’t tell it’s a spandrel window,” says Williamson. She insisted that it needed to be changed out, even though that involved removing the glass. “I knew it was a big ask.”

Despite the time crunch and their own skepticism, Noxon’s team went ahead and fixed the panel—and in fact, removed the glass twice to do so. When the window was out the first time, Noxon placed a small Lego figure with a hardhat and skirt on the ledge. He had carried the Lego figure in his pocket for the entire project, and nicknamed it Little Betsy. “When we had a question and Betsy wasn’t here, we’d ask Little Betsy,” says Noxon. “She’d normally tell us just to call Betsy.”

They replaced the glass, and the figure fell over. So they took out the window again to glue Little Betsy in place.

The miniature figure now looks out onto the ski slope—the focal point of the project from the start. “The big idea is that you come from the city and leave the world behind,” says Williamson. “You come up through the main entrance, and emerge onto the hillside.” That snowy slope, more than ever, is the centre of the action, whether for skiers enjoying a run or taking a break in the cozy comforts of the renovated lodge.

From the Ground Up: Addressing Systemic Racism in Canada’s Architecture Schools