A Home for all Seasons: Ancaster Creek House, Ontario

For family living, the modernist paradigm of open space and floor-to-ceiling glazing has proven effective for many homes. It is not usually seen as the most suitable configuration when sharing contiguous space with elderly in-laws. The Ancaster Creek house, designed by the Toronto firm Williamson Williamson Architects, responds to this challenge with a contemporary approach that deftly balances autonomy and proximity.

The design team was already renowned as creative thinkers and wood-innovation champions when it took on this commission, when the firm was still officially Williamson Chong. Past recipients of the Canada Council Prix de Rome, the RAIC Emerging Architecture Practice and the Emerging Voices Award from the Architecture League of New York, Betsy and Shane Williamson carried on with the Ancaster Creek project when former principal Donald Chong left the practice in 2016.

Williamson Williamson were by that time becoming well-recognized for their immersion in the intricacies of multigenerational programming, a design challenge increasingly common in a society with a rapidly aging population. Their portfolio includes the award-winning Grange Triple Double, which houses two generations and a rental apartment. Hoi Bo, another Toronto project, is due to be completed later this year as a home for three generations of siblings, as well as a storefront.

But Ancaster Creek is Williamson Williamson’s first dual-generational residence set in a semi-rural context, allowing the architects the luxury of opening the plan to a wetland site. Situated in a bedroom community of Hamilton, Ontario, its lower façade is clad in locally quarried Algonquin limestone. Its progressively compressed courses—diminishing in height from 12” at the top to 4” at ground—discreetly mimic the geological formations of the nearby Niagara escarpment. The upper-level milled cedar is vertically aligned, a nod to the original orientation of the wood. Its profile and massing is defiantly modernist, and yet also evokes the twin towers of a medieval San Gimignano villa. Only the dining area is open to the street, hinting at the interior program.

The clients now share the main-floor common areas with the mobility-challenged mother, since the father recently passed away. The double-height kitchen, breezeway/dining area and living room all have floor-to-ceiling glazing that presents a view of the woods and the creek that runs the length of the property. These glazed rooms are horseshoed around a courtyard, so one can sit inside and take in the architecture of the exterior, including a Japanese maple which, on a late-winter day, has curiously maintained its leaves. A pagan might take it as a life-affirming sign.

The mobility issues of Binh’s mother restrict her to the main floor. Her quarters are perpendicular to the common rooms and consist of a bedroom, accessible bath and combined kitchen/living area, with access to the back garden. A master power switch has been installed to prevent any accidents caused by memory loss, such as an unattended oven left on; and drain positioning has been designed to avert water damage if taps aren’t closed. Laundry facilities, a guest room or in-home nurse’s bedroom, three-piece bath, mudroom and three-car garage complete the procession of service rooms in a wing to the east. This ancillary wing slots under the second floor and is separated by ample soundproofing construction. For the night shifts and daytime sleeping required for their work as medical professionals, soundproofing was an essential design element.

All of this orthogonal discipline is counterbalanced by the staircase, a sculptural work that recalls Frank Gehry’s Walker Court centerpiece at the Art Gallery of Ontario, iterated here in a more poetic form: it’s less a looming tornado, more like a woman tossing on a scarf. The underside of the second-storey landing serves as the ceiling for the main floor interstitial space and seamlessly delineates the entrance to the accessible apartment. It appears to organically climb between the two floorplates “There’s almost no steel in this whole thing—which is amazing, given how thin the balustrade is,” says Betsy Williamson. The stairway’s inner core acts as its supporting column, allowing the cantilevered wood treads their levity.

Instead of maximizing the second-storey private space, the design team configured a double-height kitchen. “We always knew the second floor was going to be really small,” adds Williamson, “because we weren’t going to put the mom up there and we weren’t going to put the living spaces up there.” The added volume separates and somehow sanctifies the space, allowing sound to travel towards the skylit pyramidal ceiling. A china cup placed on the quartz composite kitchen island ricochets a little. The soaring interior inspires awe. This bit of domestic Louis Kahn monumentalism is not surprising, given that Williamson attended high school at Phillip Exeter Academy in New Hampshire and studied often in Kahn’s library. He is one of her favourite architects, she says—“among many, many others.” 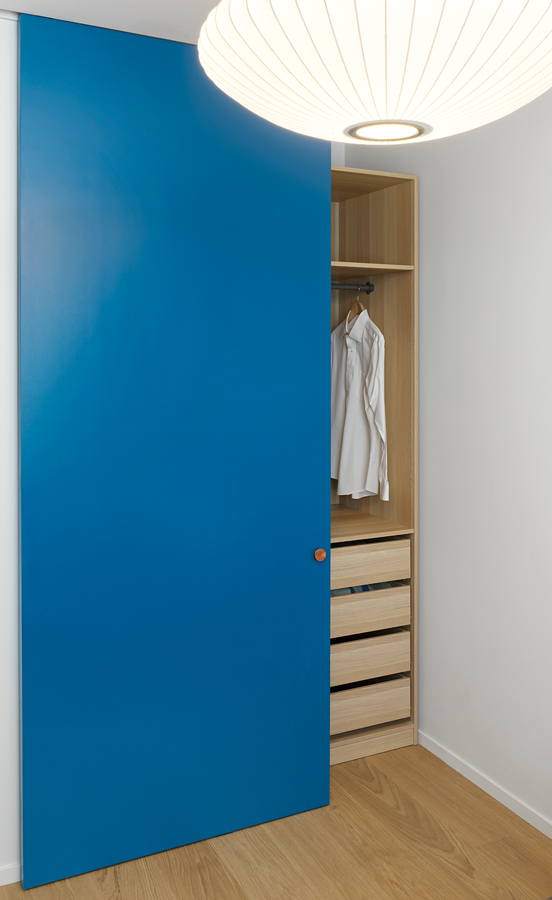 The overheight volume of the kitchen sets it apart from the dining room, which serves as a glazed passageway into the living area, showcasing the landscaping outside—which becomes “part of the dialogue of the house,” as Williamson puts it. This room, one of the most public in the house is the most popular, as a half-done jigsaw puzzle out on the tablesuggests. The configuration encourages all three occupants to dine together more often than their previous arrangement, wherein Binh’s parents both lived in the same house but on another floor. “If anything, the house has brought us closer,” says Binh. “There’s separation, but the space allows us to spend more time together, whereas before it was an upstairs-downstairs type of thing.”

For this onlooker, the courtyard frames the occupants in the rooms in the wing across the courtyard, as though I’m looking at a freeze-frame or a nostalgic vignette. This is a house of dramatic volumes and jaw-dropping moments, but on this overcast day, with white walls inside and white sky outside, it feels like an intimate corner of a celestial space.

The HBSA invites you to attend a keynote address by Globe & Mail Architecture Critic Alex Bozikovic and a special reception to kick off our event “The Missing Middle: Millennial Housing in the 21st Century!”

In partnership with the Carnegie Gallery, the HBSA will bring together design professionals, community members and policy-makers to address the issue of affordable housing in Hamilton and beyond through a design charrette and exhibition. The goal of the event is to explore solutions to the issue of entry-level housing affordability for the Millennial generation in the context of Hamilton’s housing market and urban design challenges/opportunities.

After a special keynote address by Alex Bozikovic at Dundas town Hall, guests are invited to a reception at the Carnegie Gallery (just down the street)!

Doors will open at Dundas Town Hall at 7:00 pm!