Domestic space comes with certain assumptions about the activities it contains: eating and drinking, sleeping and working. Architecture transforms these activities, making them grand or efficient, functional and neutral or specific, referential, purposeful — usually in the broadest sense for a typical life. Mathematician and violinist Jim Stewart, in commissioning Integral House, and Shim-Sutcliffe Architects, in designing it, embraced the specificity of his own unique life and livelihood, programming the house around a concert hall that grew larger with each iteration of the design. Joseph Clement’s documentary film “Integral Man” attempts to capture something of the intimacy that comes with that kind of design specificity between the house and Stewart as its patron.

The film is, above all, a legacy project of the highest order: Stewart, who created entire communities around his interests was diagnosed with terminal cancer part-way through filming and didn’t live to see the final cut. His textbooks have provided a generation of students with their grounding in calculus, and his private concerts at Integral House were opportunities for musicians and audiences to come together in ways that aren’t possible in a thousand-seat hall. But the film, in capturing the essence of the house in the last months of Stewart’s remarkable life, now contains the moment in which the connection between that life and the architecture that held it dissolves. 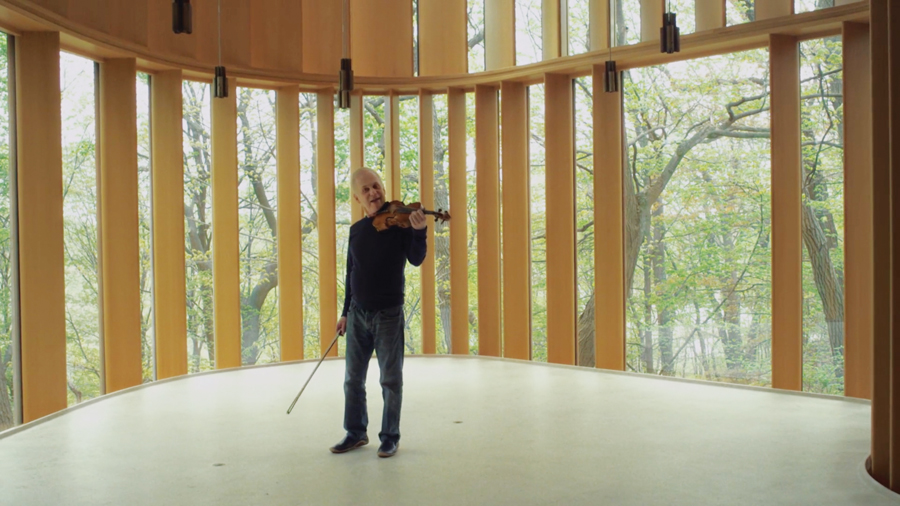 Clement strived to understand how the home changes across the four seasons, the film’s final turn into winter becoming more poignant after Stewart’s diagnosis. Educated in landscape architecture, Clement has an eye for the dynamic way the building hugs the slope of its ravine setting and how the surrounding trees fracture the light that streams through the oak-finned windows. His lens follows undulating walls that evoke the side of a violin, the sine waves that describe a musical note, and the curve of the river below. Integral House is not so much personalized as personal: private spaces retreat and ordinary life expands into a hall for concerts and parties, and contracts into a space for solitary mornings and intimate gatherings of close friends. Clement made a point of retreating to an upstairs bedroom in the middle of a concert to hear how the sound carried. In the end, the architecture’s effect on the filmmaker is such that when he explains its impact, he refers to a “you” that is less an abstract anybody and more an echo of Jim Stewart: “When you create something that is architecturally significant, you want it to be seen,” says Clement. “You want it to be part of the culture.”

The Integral House existed under Stewart’s tenure for only a few brief years: his impact and the house’s presence in the city’s cultural scene and collective imagination were divided by his death. How does one person’s quasi-open house remain collectively appreciated while continuing to do what it was designed to do — responding to and organizing the rhythms of an individual life? This expansive sense of personal space as both hospitable and private is the animus of the film, and ultimately, of the house itself.