A Toronto hotel by Shim-Sutcliffe brings high design into the public spotlight.

Hotels matter because, as architect Robert Stern once put it, they “constitute a permanent, habitable dreamworld, which we can escape into and depart at will—a dreamworld we can share with others.” Toronto’s latest addition to the typology—the Ace Hotel, by Shim-Sutcliffe Architects—is the kind of dreamy place that architects love to create and spend time in.

Facing St. Andrew’s Park, an island of green in a growing sea of downtown offices and condos, it’s also a real-life manifesto that, in Brigitte Shim’s words, is “a statement of resistance against the thin and glassy.” It is a magnificent piece of architecture in its own right, but also a contextual fabric building that respects its neighbourhood’s scale and material history. It raises the bar for private development in its immediate context and throughout downtown Toronto.

The duo of Brigitte Shim and Howard Sutcliffe and their team are about the best among us at creating architecture founded in a sincere reverence for craft and material research. Their deep, thoughtful design consideration often seems freed from the frets of normal time and budget constraints, and they relish it. They produce consistently remarkable works of architecture that make us hold our breath. This is not the giddy exhilaration of bold, sculptural form, but quiet, deliberate, restrained modernism.

The Ace is Shim-Sutcliffe’s first tall building, one of few in a non-landscaped urban setting, and one of an even smaller number that are easily accessible to the public. Set on a tiny 21-by-27-metre lot, it is a world apart from the bucolic rural and backcountry sites of their most recent Governor General’s Award-winning private residences. It’s also a departure for the Ace, whose worldwide hotels, to this point, have mostly been in renovated heritage buildings.

But there is a remarkable coherence between Shim-Sutcliffe’s exquisite design sensibilities and the Ace’s goal of creating classic, refined places. Shim-Sutcliffe and Atelier Ace (the hotel’s in-house, full-service creative agency, and a collaborator on the interiors) began the design process by visiting all of the Ace’s properties, getting a sense of the overall brand. The Ace Toronto feels quiet, restrained, taut. It’s suave and debonair, not brash or hippy. It achieves the “timeless” feel that we all seek. It is produced with superb attention to design detail and craft, with a fantastic, utterly authentic layer of rich quality. As the day ends, when golden sunlight streams in horizontally down the canyon of Adelaide Street and across from the facing park, the Ace is an ethereal, otherworldly place.

The monumentality of the building is apparent from a glance at the 14-storey brick building, which takes on a dead simple rectangular form, made spectacular by an intense attention to detail. To the west, deep, robust brick piers frame wide vertical slots of window, whose recesses throw deep shadows and rise full height, with tall bays reminiscent of Louis Kahn’s First Unitarian Church. A subtle recess of the bays above the second floor gives away valuable floor area, but produces a powerful presence for the building’s main façade when seen from the long view down Adelaide. The piers have no syncopation or pattern: I wish they were raw buttress forms ragged against the sky, like a Sant’Elia fantasy, instead of comfortably pulled together with a horizontal cap.

The Endicott brick boasts a lush purple-red colour, and a glossy texture that adds to the classic feel of the building. There were some budget constraints, though: the brick is panelled, rather than hand laid. In response, the architects provided a thoughtful celebration of the panel joints as a design feature, while embracing the panels’ liberation from gravity with unusual vertical coursing and interspersed panels of soldier courses. 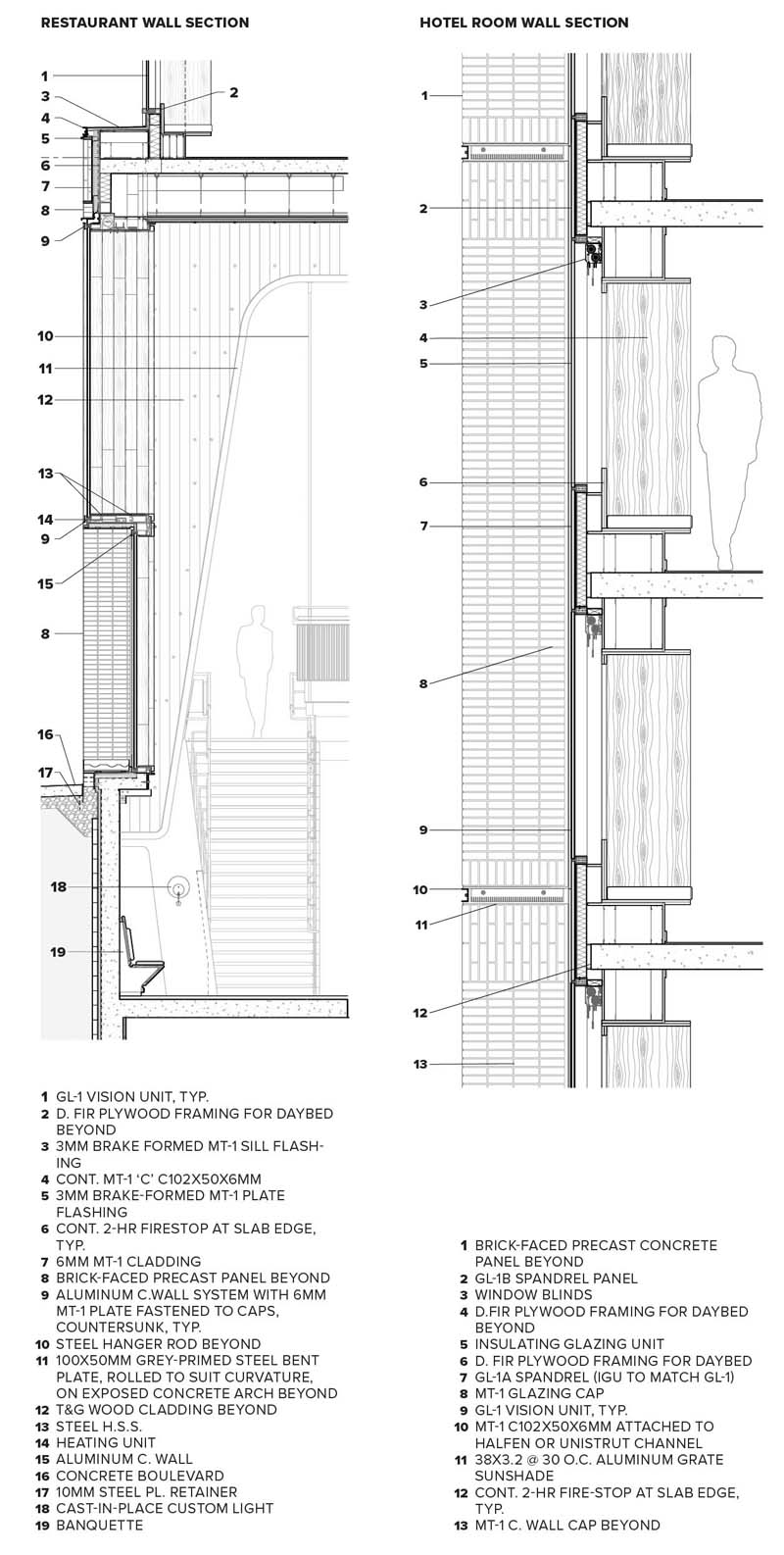 The simplicity of the west wall and its regular, powerful patterning is paired with a much different north wall, facing the quieter Camden Street. Here, a rich, flatter surface results from a delightful, sophisticated and informal pattern of varied windows, with wood privacy screens to the condo across the narrow street. At ground level, the main entrance is the magical focus—a flourish of bold canopy with a wavy, layered wood-and-steel soffit over wood revolving doors, all composed with subtlety and restraint.

The entrance canopy is supported by a structural concrete arch—the first in a series that carries through the sublime two-storey lobby at tight 4.5-metre intervals. The heroic, splayed concrete columns yield a highly unusual space, reminiscent of Alvar Aalto’s Sanomat Newspaper building and of dirigible hangars.

Each of the asymmetrical columns is carefully sculpted to the room. On the east, oversized steel knuckle connectors attach to counter-height bases, framing the lobby bar. On the west, the columns descend down past the park-facing windows into the lower-level restaurant, where they jackknife and splay back into the room. The columns have a raw formboard finish on the outside faces, contrasting with polished inside faces, and are race-striped with a grey-painted steel angle corner relief detail. Light grey plaster ceilings miss setting off the concrete frames as wood, copper or Corten would have, but it is a space refreshingly not defined by drywall, ACT or orthogonality.

Suspended by rods and cantilevered from the columns, the lobby bar sits on a floorplate that floats a few steps up from the entrance. It’s a particularly fine civic room, modest yet exhilarating, with a compact size that leads it to be often busy and buzzy.

A grand stair slices down the west side of the main floor, bringing guests to the restaurant—a generous, open, unencumbered space. The decision to raise the lobby bar a metre above the street allows for more light to pour in from large clerestory windows along the west wall. To the south, an atrium—where the restaurant and lobby bar floors interconnect—feels high and welcome, although one wishes the tiny site allowed it to be larger.

The floating lobby is not so apparent to view, except where seen from below to the south from the restaurant atrium. Otherwise, it can only be glimpsed from the entrance through a narrow slot below the lobby floor, and few would notice this. The suspension system is concealed in the solid guard, so the floating effect is lost. Perhaps a more open guard or greater expression of the suspension elements would have made the raised effect more appreciable. One craves more rich details like those that adorn the south feature stair, where an arrhythmic series of suspension rods, serving as braces, bisect round reveals in the steel guardrails.

The backdrop to both the lobby bar and restaurant is a stunningly crafted plywood collage, made by A. Howard Sutcliffe at Shim and Sutcliffe’s cottage and gifted to the project. Inspired by light dancing on a northern lake, its visual richness comes from the varied patina of the sun- and wind-aged segments, and an intended repair detail for warping edges that now seems perfectly needed in its randomness.

Travelling upstairs, the floorplans are super-efficient, with a pinwheeled array of rooms on each floor. The best rooms face the park to the west, with second-best rooms to the north and south, and exit stairs abutting the east party wall. Shim-Sutcliffe describes the rooms as “urban cabins.” In that spirit, their main design element to each room is a pair of staggered, varied window boxes of raw-edged double plywood—one a lovely window seat with leather pad and reading light, the other a desk/object stand.

A pleasant touch is the room accent colour, repeated in the bathroom grout—Frank Lloyd Wright’s Cherokee Red paint, an almost steel primer tone that matches the exterior brick and steel lobby stairs, and a recurring Shim-Sutcliffe motif. It’s a warm, soft choice that fits well with the urban cabin idea. But I found much of the room design rather fey and boring. White solid surface counters, white tile, Fat Albert lights—yawn. Another disappointment was the prominent, yet unadorned TV screen—a surprising omission of design attention. Shim-Sutcliffe’s artistry is at its highest when they design a project as a gesamtkunstwerk, down to bespoke door handles and lights; these shortcomings are telling for where private development funds fall short of the budgets available on private projects.

Towards a better city

To build in Toronto, Ace partnered with Zinc Developments and Alterra, local entities whose previous work focused on luxe condos of more conventional design. Ace Toronto marks a whole new level: it sets a benchmark for hotels in Canada for the design quality possible even with the constraints of the real estate market. Other developers are certainly taking notice.

As with any project, important design elements get jettisoned along the way: on the exterior, I regret the loss of expressed metal belt courses every second floor, now only on the third floor line. On the top floor, there is a fabulous rooftop bar room, bookended with a pair of fireplaces framed by lovingly crafted steel mantles and highly textural, integrated concrete art panels by Montreal artist David Umemoto. (An absolutely fabulous aspect of the hotel is its extensive and diverse art and decor elements, mostly sourced or commissioned from thoughtful local artists and designers selected by Atelier Ace.) The washrooms on this top floor are also wonderful, with wall sconces made from sectioned clay chimney flues. But these dramatic washroom design elements did not make it into the washrooms serving the lobby (which are bland), and the outdoor bar terrace is much simplified from its original design, losing a long loggia along the west wall that would have provided a sense of shelter and scale. The architects, always diplomatic, demure to criticize such losses. But this is also a lesson for clients: stay the course, see the vision through.

The Ace Hotel offers the city not only a new exemplar of hotel design, but a valuable approach to quality infill. Its presence is gently enlivening a quiet, post-industrial area of the city. It is both a showpiece and, simultaneously, an excellent fabric building. It blessedly avoids fakery, nostalgia and vulgarity while projecting design depth and robustness. Ace Toronto demonstrates the transformative potential of quality architecture, and we need more of its like. But in the meanwhile, it’s a dreamworld I’m glad to enjoy.