The project by Invizij Architects is the first new-construction Passive House building in Hamilton, and one of the largest in Canada.

Invizij Architects has announced that 500 James North, a mixed-use project developed by James North Baptist Church and Christian charity Indwell, is now certified by Passive House International (PHI). This makes it the first new-construction Passive House building in Hamilton, and one of the largest in Canada. 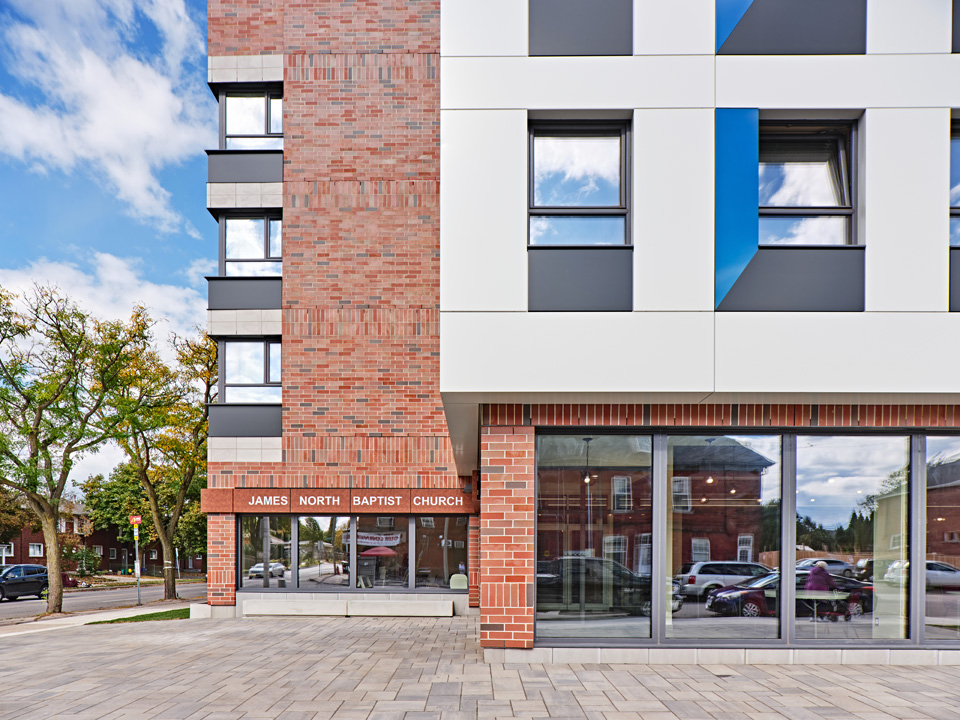 In 2016 the church, formerly Hughson Street Baptist, was planning to replace the historic church building they had outgrown with their North End Hamilton congregation. They had purchased the former plaza at 500 James North anticipating renovating the space as a new ministry centre.

As gentrification gained momentum, their growing concern for displaced neighbours led them to explore how affordable supportive housing could be part of their project. This led to a partnership with Indwell. After some consideration, the church decided to pursue a new vision of including an affordable supportive housing complex, which was named North End Landing, in their new site. “It was a match made in heaven,” says James North Baptist pastor Dwayne Cline.


The Passive House standard was chosen to help both James North Baptist and Indwell achieve their organizational values of being good stewards of resources, and to help keep utility costs low for future tenants.

The design team led by Invizij built on past experience with high-performance buildings to bring the designs to life. “There was a learning curve for sure, but it is actually straightforward once key decisions are made together with our design team at Kalos Engineers (structural) and CK Engineers (mechanical & electrical),” commented Emma Cubitt, Principal at Invizij Architects. “Since this project, we have helped clients construct over a dozen Passive House apartment buildings.”

The North End Landing/James North Baptist church is a 60,000-square-foot building over four floors. It has 6” of mineral wool insulation wrapped around the whole exterior façade, with fiberglass Z-girts supporting the brick and cladding. Electric heat pumps provide heating and cooling, and help keep the operational carbon footprint low.

The building requires very little heating, at only 15kwh/m2/year. The building’s air-tightness of 0.5 ACH highlights the attention to detail by Schilthuis Construction, who have become a leading contractor for Passive House buildings in Canada. “We have always built well, so the transition to Passive House detailing was just one more step on that journey,” says Henry Schilthuis.

“This is a beacon project that demonstrates what’s possible for mixed-use Passive House buildings. Combining the residential, community, and congregational elements was a real challenge. The entire team, from design through construction, worked collaboratively to ensure success. We acknowledge James North Baptist Church and Indwell for their unwavering commitment to Passive House certification,” says Andrew Peel, of Peel Passive House Consulting.