As 2015 draws to a close, we offer you this round-up of the stories that topped our headlines. On behalf of the staff, correspondents and contributors at Canadian Architect, we wish you a happy holiday and all the best with your projects in 2016.

1. Canada is coming out at the forefront of tall wood buildings, with the opening in late 2014 of the Wood Innovation and Design Centre by Michael Green Architecture, and the announcement in 2015 of several more landmark CLT-based projects. Notable among these are an 18-storey mass timber and concrete student residence by Acton Ostry Architects, and the world’s largest residential project in CLT by Lemay+CHA. 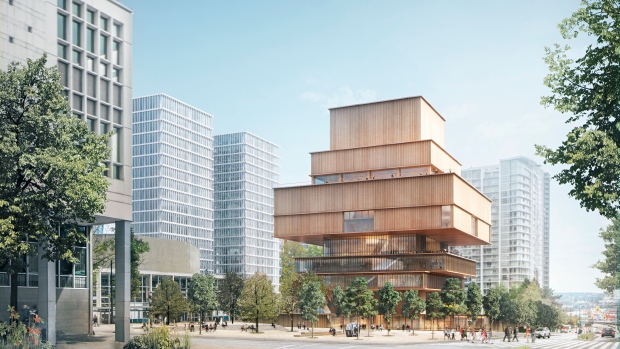 2. Speaking of wood, the Vancouver Art Gallery unveiled Herzog & de Meuron’s conceptual design for a new museum building in downtown Vancouver this September. The wood-clad 310,000-square-foot building design has garnered mixed reception from local architects, some of whom feel that the museum should instead be expanding on its current site, which was an early example of adaptive reuse by the late, great Arthur Erickson.

3. The Memorial to the Victim of Communism came on our radar early this year. The proposed design was planned for a site adjacent the Supreme Court in Ottawa that had been earmarked for a federal justice building. As renderings appeared in newspapers and online, public outcry ensued, opposing the angular concrete design, ideology, flawed process, and partisan politics behind the project. Architectural opposition to the site choice was led by the RAIC and architects Shirley Blumberg and Barry Padolsky, who filed a lawsuit against the government, stopping the project in its tracks the day that the site was being staked out for excavation to begin. As the year ends, the project has officially been moved off the contentious site.

4. In Toronto, architecture firm PARTISANS has been making waves with a slew of awards, including the OAA Best Emerging Practice Award, a shortlist mention at the recent World Architecture Festival in Singapore, and the top prize from the DX Emerging Designer Competition. Their built works so far are few—but they’re stunning. They include the Grotto Sauna and Bar Raval (this editor’s favourite Toronto hangout).

5. On the East Coast, the opening of the new Halifax Central Library in December 2014 brought contemporary architecture to the heart of the city. Critic Brian Carter travelled there to find that the building by Fowler Bauld & Mitchell and schmidt hammer lassen is well-loved and well-used. It proves that—despite all the predictions for the death of books—libraries are still vital community hubs in Canadian cities.

6. Of course, some of those libraries might be the type that don’t have books at all. Ryerson’s new Student Learning Centre in downtown Toronto, by Snøhetta with Zeidler Partnership Architects is of that breed. As the university website explains, the edifice, which opened this February, “provides Ryerson students with an outstanding environment to study, collaborate and discover.” Or as I heard one student describe it to a friend in an appreciative tone, “it’s just, like, a giant building to hang out in.”

7. This summer, Trois-Rivières saw the opening of a stunning new amphitheatre by Paul Laurendeau in joint venture with François Beauchesne. It’s a bold gambit for a small city, as Odile Hénault reports in the cover story of our November issue. The outdoor theatre had a solidly programmed summer, and we’re hoping that this handsome building remains packed with appreciative audiences.

8. Outside of Quebec, design competitions for major buildings in Canada remain rare. So we’ve got our eyes glued to the competition for the Canadian Canoe Museum in Peterborough, Ontario. The finalists include Kohn Pederson Fox (New York City), Heneghan Peng Architects (Dublin), Bing Thom Architects (Vancouver) with Lett Architects (Peterborough), Provencher_Roy (Montreal) with NORR (Toronto), and 5468796 Architecture Inc. (Winnipeg) with Moriyama & Teshima (Toronto). The winner is set to be announced in January.

9. Think of it as an early Christmas present—and it’s a big one. This November, the City of Toronto, together with philanthropists Judy and Wil Matthews and Waterfront Toronto announced a $25 million partnership that will create a new public landscape beneath the western section of the city’s Gardiner Expressway. The design will join other under-expressway landscapes across the country, like the covered street planned as part of Bjarke Ingels’ Vancouver House, and Toronto’s own Underpass Park.

10. This summer, the Pan Am games came to Toronto, and the city was abuzz with construction activity in preparation for them. The largest construction site was the athlete’s village, an exercise in accelerated urbanism that saw an entire downtown neighbourhood developed in only three years. Another major coup: the completion of the current phase of renovations to Nathan Philips Square, a space that celebrated its 50th anniversary this year.

11. You’ll forgive us for ending the round-up by tooting our own horn—but we’re still buzzing with excitement from this event. A few weeks ago, we presented the Canadian Architect Awards of Excellence at the IIDEXCanada show in Toronto—the first time in the memory of our staff that a public awards ceremony has been held. After, we hosted the winners for a private dinner at Shim-Sutcliffe’s superb Integral House. We hope to build on this success in the coming years, with the ultimate goal of achieving broader recognition for our award winners.

We look forward to following these and other stories with you, in print and online, in the new year. See you in 2016!