WINNER OF A 2015 CANADIAN ARCHITECT AWARD OF MERIT

111 is located on the vibrant, dynamic streetscape of Queen Street West. The quickly developing area is a highly sought-after place to live, due to the diversity of building typologies, the neighbourhood’s rich character, and an ingrained sense of community.

A third of the 233-square-metre lot is occupied by an existing building that Ja Architecture Studio renovated and reprogrammed in 2013, outfitting it with a restaurant on the ground floor, a residential unit on the second storey and an architecture studio on the top floor.

The new rear addition—111—includes three programs: a flexible commercial unit, three residential units and a two-car garage. The new building asserts its presence through a clear geometric form. Set on top of the commercial podium, the residential units project their pitched roofs from behind adjacent buildings and invoke a familiar figure: the traditional house icon. This comforting shape fits in naturally with the nearby residential neighbourhood. Yet, 111’s austere envelope sets it apart from its ornate neighbours as an alluring anomaly.

While vehicular and commercial service access is provided through the rear laneway, the main point of entry to the mixed-use development is through a breezeway that connects the busy public street to a semi-private courtyard. Much of the ground floor is occupied by a two-car garage, so the design of the commercial space capitalizes on the basement level and provides a mezzanine above the garage, connected to the existing main floor. While this design can suit a variety of programs, its current form has been conceived in collaboration with a local chef, who envisions a private dining and bar area on the mezzanine, a grand occupiable staircase for congregating and informal dining, and a large open kitchen on the basement level. 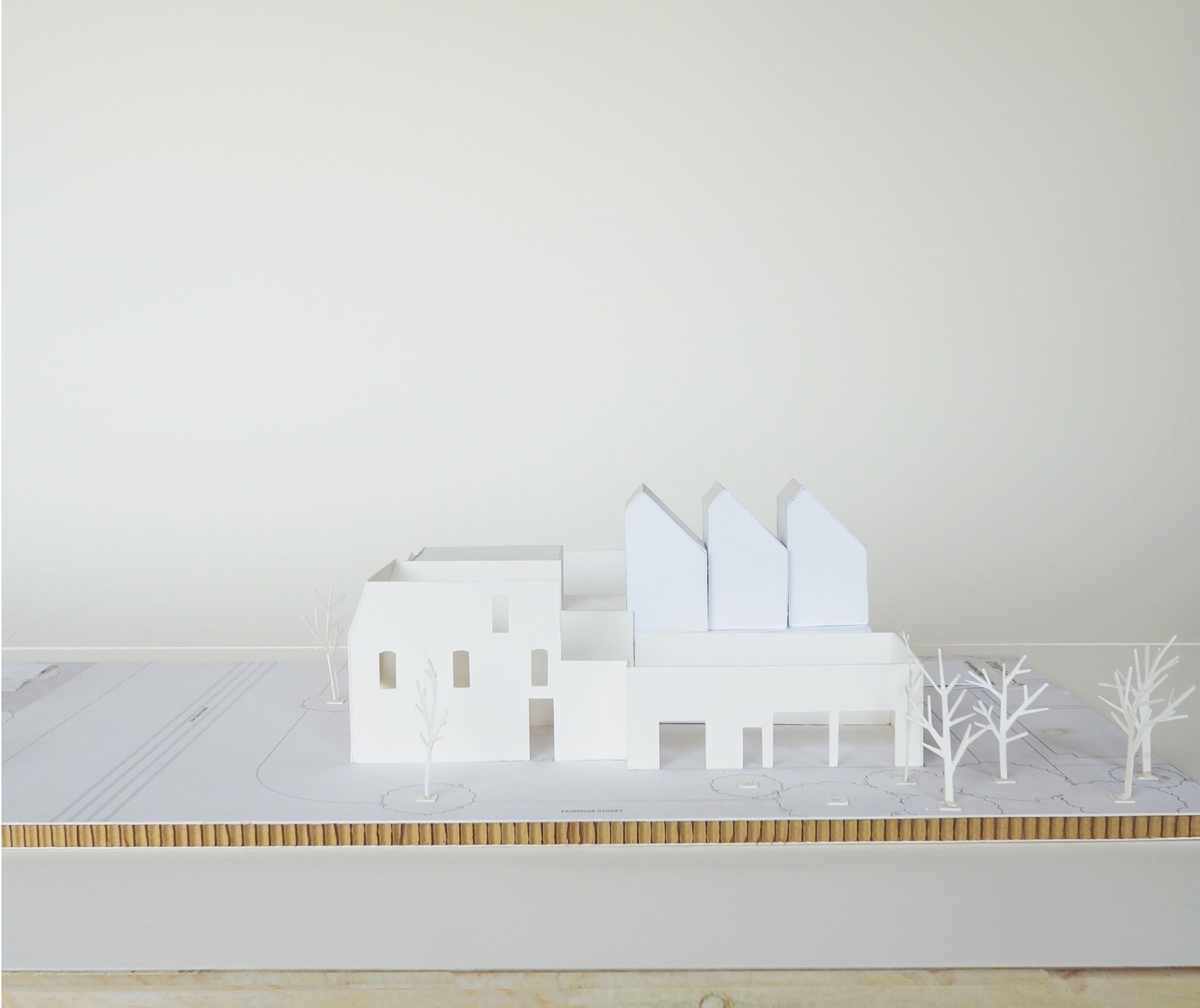 Three distinct volumes—each a nearly identical three-storey residential unit—sit atop the commercial podium. Access is via a set of stairs from the courtyard. At the top of the stairs, an outdoor platform overlooks adjacent balconies, inviting interaction. Direct entry into each unit gives them a townhouse-like feel.

Careful attention has been paid to enabling natural light to penetrate deep into the units. Each floor includes windows on the north and south walls, and light also enters through a large cutout on the third floor, traveling into each unit through cutouts on every floorplate. Even though each unit is only 48 metres square, the loft-like design and abundance of natural light gives them a larger feel.

Overall, the project is an exercise in architectural massing and typology. It aims to create change in this sensitive historic context without falling into either extreme of aggressive development or low-rise domestic conformity. It expresses a scenographic desire to use architecture as a stage for an urban drama, which unfolds in the building’s breezeway, communal courtyard and elevated balconies. As such, the building becomes a silent witness to fleeting moments and strange encounters in the depth of an urban block in this layered neighbourhood.

:: Maxime Frappier :: I very much like very much the silhouette of the building, with the composition of the three units as staggered, sculptural objects.

:: Pat Hanson :: Long term, there’s a question of how small a space people can live in. But this is an area in the city with a more transitory, younger population. It would be a study in living with less, which is not a bad place for any of us to be. The presentation skillfully evokes a spatial clarity and beauty, while maintaining the grit of the city.

:: Johanna Hurme :: This project proposes something new in terms of the typology of mixed-use infill in Toronto. It imagines how you could squeeze three additional dwelling units on a very small, tight site. The verticality of the units and their relationship to the commercial spaces below is clever. It feels fresh, although we are concerned about whether it resolves practical issues such as exiting and providing sufficient light and views to the suites.