An awkward site in Winnipeg becomes home to a jewel-like library.

The Prairie landscape plays out at the very large scale. Immense natural and infrastructural geometries stretch relentlessly across the land, before slipping into each other at odd angles: rail lines intersect, ribbons of water cut into farm grids. Winnipeg itself, as an urban form, is generated out of such collisions between railways, roads, rivers and land use patterns.

It takes skill and know-how for an architect to accommodate immense geometries—so often the result of planning and infrastructural accidents—in a jewel of a building. This is what David Penner and h5 architecture (with principal Hélio Rodrigues) have achieved in their Windsor Park Library. It’s the third project they have designed together, and a small building. Nevertheless, it accommodates not only the accidental geometries of the city and region, but also the shifting technologies and social changes playing out today at a global scale.

The library is bordered by five urban features: to the east, the four-lane arterial Archibald Road and a Canadian Pacific main line running parallel to it; to the south, Bonivital public swimming pool; to the north and west, the publicly owned Windsor Park golf course; and running diagonally from southeast to northwest, a shallow ravine leading to the Seine, Winnipeg’s meandering third river.

For years, the awkwardly shaped site served as a parking lot for municipal equipment. But in 2013, it was considered in a new light, as part of a project to rejuvenate Winnipeg’s library services.

This renewal effort might be seen as a meeting of vision and municipal realpolitik. In a time of general fiscal austerity, community-oriented libraries are an appealing item to tackle from the list of infrastructure deficit projects. The program has resulted in a series of renovations (including work by Bridgman Collaborative and Public City Architecture) as well as several new libraries, among them, Windsor Park, Transcona Library (Cibinel Architecture, 2019) and Bill & Helen Norrie Library (LM Architectural Group, anticipated completion in 2020). Work at three other branches has been planned, but suspended, pending debate over Winnipeg’s current four-year budget.

The work that has been completed so far is praiseworthy. According to Betty Parry of the City of Winnipeg’s Collection Development division and Ed Cuddy of Library Services, the planning of libraries in Winnipeg has evolved radically over the past two decades. Straightforward templates for library design no longer exist; planning now involves a negotiation between librarians, city staff and local residents. Public use of the city’s libraries extends far beyond books to information technology, community programming and accessibility in all its senses.

As a result, Penner and Rodrigues found themselves asked to do more than accommodate books: satisfying, in addition, new patterns and networks of use. Early in schematic design, the program and site constraints naturally resolved into a 30/60 triangle—a form that has a nostalgic resonance for architects of a certain age.

The simple yet unusual form stands out as a landmark in the community. Its acute angle is striking to any passerby—pedestrian, bicyclist, driver. Set back and sunk slightly below road level, the building is buffered from the adjacent traffic arterial by stands of prairie tall grass. Access is via a looping roadway designed, like a street, with parking on either side, avoiding the typical suburban-style parking lot. An arcade of asymmetrical, inventively detailed W-sections supports a corrugated steel roof, all powder-coated white; behind this rises the library’s east façade. The sleek profile of the library cuts into one’s line of sight, an effect even more powerful at night, when interior lighting makes the building glow. It slices toward the adjacent ravine, where a wooden bridge leads to the public pool, offering other community activities as well as overflow parking.

While most of the façade is full-height glass, as one moves from the south tip of the building to the entrance, the glazing is modulated by perforated Corten cladding, screening some windows while revealing others. Wise budgeting is always appreciated in this city, and the architects emphasize that this cladding was off-the-shelf, with standard sections used to minimize waste and expense. As one moves further north, the façade becomes progressively more opaque; as it wraps around the corner, the perforated steel is replaced by solid Corten. With good reason: the north elevation faces the tee of the 16th hole, so the wall of weathered steel defends against errant golf balls. 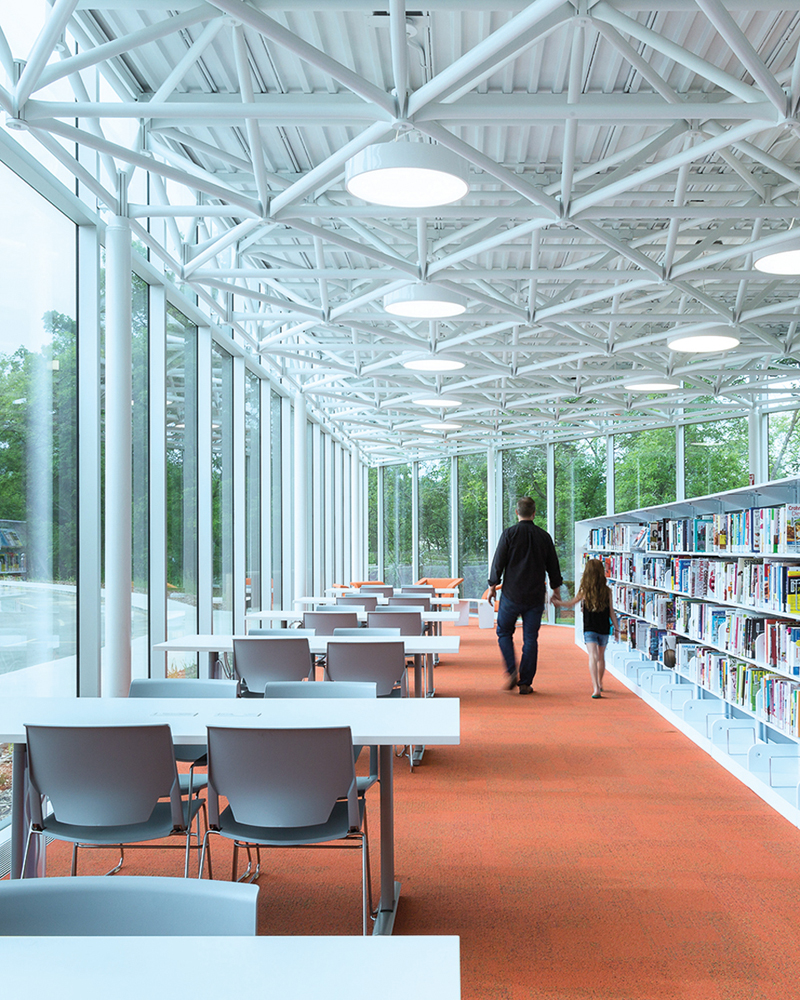 As one enters the building, a clear division into public and service space unfolds, a natural result of bisecting the triangle. To the left lies the public area, the “skinny” portion of the triangle. Here, the reading room and stacks are bounded by two long glazed walls converging at the southern tip of the building. The acute angle creates a striking interior spatial experience, accentuated by views to either side. Through the east wall, traffic zooms by silently on roadway; to the west is the library’s grassy patio set against the foliage of the public golf course. Computer workstations are arrayed here, so this leafy view is seen by users glancing up from their screens. This is a relief for the eyes, and an astute integration of the landscape into the design of the building.

The “fat” northern section of the triangle, pushed up against the 60-degree angle, is given over to administrative functions. Rather than using a connecting corridor, the architects have stacked most elements Tetris-style. For some, the resulting spaces may seem crowded; others will read the planning as minimalist and clever, reducing circulation space to almost zero. To this end, mechanical systems are only accessed from the exterior, through the solid Corten north wall. As with many good buildings throughout history, imperfections in the geometry are accommodated in the invisible part of the structure. Access to the mechanical room is articulated as a notch in the plan—the only departure from the purity of the triangle.

Structural systems are similarly divided between the two parts of the triangle. In the administrative space, cement blocks support a poured-in-place concrete structure overhead, whose occasional imperfections add character. In contrast, a space frame spans the acutely angled, public, portion of the triangle. The architects chose the system for its triangulated geometry and its resonance with the notion of “network.” Like today’s library programs, a space frame is centreless, distributed, multidirectional, and can serve as an “umbrella” for fluctuating conditions.

There is one deviation from the clear spatial and structural division of the bisected triangle. This is the white concrete box of the program room, used as a classroom and community meeting place. Inserted into the narrow section of the triangle beneath the space frame, it nevertheless is well integrated into the design. On one wall, a mosaic by Manitoba artist Simon Hughes, known for his axonometric imagery, perfectly complements the geometry of the architecture. Even better is the detailing of the concrete walls, whose tie holes follow a triangular pattern mirroring the constellation of space frame hubs above, as well as the geometry of the building as a whole. All electrical outlets and controls in this space are coffered into the béton brut concrete. Only one small shortcoming is evident: to make the program room work acoustically, the space frame above its periphery is infilled with baffles. The tricky angling of planes is well-managed but inevitably a little fussy, and can never provide an uncompromised acoustic buffer.

In all other respects, the building is technically accomplished. Heating is integrated into the perimeter wall; air is supplied over the edge beam and up through a neatly detailed floor grille running the full length of both long edges. Slabs are hollow-core. Blinds on the curtain wall are daylight-responsive. HVAC and interior lighting are integrated and automated in one system, to better coordinate heating and cooling loads related to light levels. Furnishings are elegant and durable.

The building has already had a social impact and, not incidentally, a pedagogical one. In the fall, Penner and Rodrigues hosted University of Manitoba architecture students from a design studio led by Ted Landrum that focused on new definitions of the public library. Windsor Park is an astute choice of case study, given its programmatic context and the excellence of its architecture.

The building is well-appreciated by the public, too. Library use at Windsor Park is up 25 percent over previous years. Cuddy emphasizes that site-specificity and a connection with the community were priorities from day one, as exemplified by Windsor Park’s unique form. The desire for locally specific architecture is one reason that the designers for Winnipeg’s recent library work have all been selected from Manitoba.

Design quality was also a priority from the beginning. For Betty Parry, this is a key reason for the community’s pride in the facility. Worthy buildings, she says, are respected and better-treated by the public than run-of-the-mill buildings. There is perhaps no better argument for the excellent design of public spaces.

These are all important discussions for Winnipeg right now. Recently, the library’s central Millenium branch, located downtown, has become a site of contention. Perceived security threats linked to an increase in substance abuse and related violence have led to the introduction of metal detectors and bag searches for all who enter. Cuddy has defended this strategy, in light of increasing stresses on his staff at that location. But for many—including members of the activist group Millennium for All—it is anathema to what libraries are supposed to be about, particularly when downtown gentrification is already pushing marginalized people out of public spaces. Efforts have been made by library management to accommodate such users—for example, by providing lockers for personal effects—but there are no easy answers.

Windsor Park is a suburb, and its location shelters it from these stressors. But it is not immune. For example, the minimal lines of its furniture are chosen in part to prevent wayward needles getting lost in upholstery. As a part of the public library system, Windsor Park is inevitably caught up in current debates over public space and right to the city.

Despite such tensions, the champions of the city’s rejuvenated libraries, along with the designers of these places, have demonstrated a faith in what architecture can contribute to the public realm. David Penner, one of Manitoba’s most prominent architects, and a founder of the design advocacy group StorefrontMB, was a firm believer in that. Over the years, his own work and his collaborations, like this one, have deeply enriched Winnipeg’s built environment. David passed away suddenly this January. This building is a fitting tribute to his memory.

Lawrence Bird (MRAIC) is an architect, urban designer and visual artist. He works in Winnipeg at Sputnik Architecture inc.