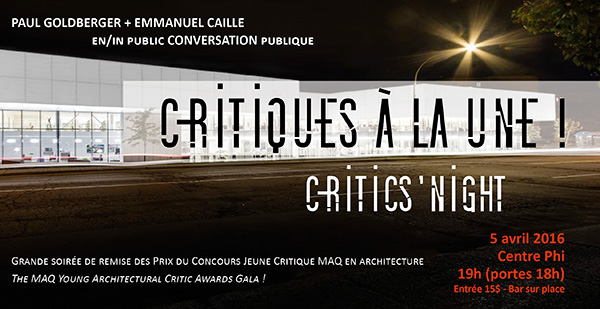 This bilingual discussion, which will include the audience, award recipients, and the jury members and architectural critics from Vancouver, Toronto and Montreal, will be moderated by professor Jean-Pierre Chupin.

On 5 April, this special evening will showcase emerging architectural critics (including some of our competitors), senior editors such as Paris’s Emmanuel Caille and Toronto’s Elsa Lam, experienced freelancers including Vancouver’s Adele Weder, and a living legend — Paul Goldberger, who was awarded the Pulitzer Prize for his New York Times architectural criticism column and is the author of an all-new biography on Frank Gehry.

While the media are often seen as key in promoting the advancement of architecture in our society, they rarely have the chance to speak for themselves. This event will be one such opportunity, and you’re invited to take part in the conversation!

The gala at the Phi Centre will begin with the announcement of the winners of the bilingual Canada-wide competition launched last September’s by the MAQ with the support of the RAIC. The results have been a well-kept secret… until now. Participants are encouraged to come and find out if they are one of the lucky award recipients.

After acknowledging the record participation and quality of submissions for this year’s Canada-wide competition on the theme “A Library for the 21st Century,” the audience will have an opportunity to dive into the little-known and changing world of architectural criticism.

It’s an opportunity to find out more about what architectural critics really do: Are they writers or researchers? Can they make a living from their profession? What ethics guide their work? What kind of pressures, if any, do they have to deal with? What makes an article good or bad? Where is the field of architectural criticism headed? Is it a dying art? Can it influence policy and readership? North American “neutrality” vs. the more opinionated French press — how does architectural criticism differ between France and the United States? Where does Canada sit?

The discussion between Paul Goldberger and Emmanuel Caille will be moderated by professor Jean-Pierre Chupin, who will provide bilingual interpretation to answer any questions.